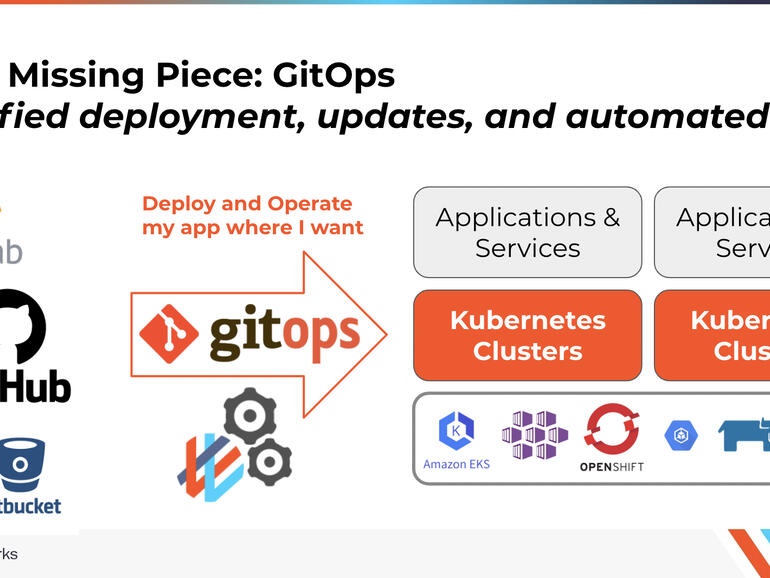 Commentary: The big enterprise problem isn’t running hundreds of apps across multiple clouds; no, the big problem is running the same app consistently on just one cloud or data center.

We’re used to getting mobile apps through Apple’s App Store or Google Play, but when it comes to enterprise apps, the experience is dramatically different, and dramatically worse. According to Weaveworks CEO Alexis Richardson, however, it doesn’t have to be this way. Though we’re perhaps decades away from enterprise software being made available through an app store-like experience, we’re also much closer to such benefits than we might think. The trick, Richardson said, isn’t really to finagle multi-cloud deployment of applications.

No, for most enterprises, most of the time, they’re just trying to ensure consistency in application configuration on the same cloud (or data center). Fortunately, Kubernetes and GitOps have combined to make this possible.

This wasn’t the first time I’ve talked with Richardson about the enterprise app store experience. Nor is it a secret he’s shared only with me. In fact, at a recent conference Richardson addressed the topic in his keynote. What I hadn’t appreciated, however, was that the appeal of this “enterprise app store” isn’t because customers are clamoring for multi-cloud. Rather, it’s about consistency within the same cloud (or data center).  “A key thing you need to enable the enterprise app store model is when you do a deployment, whether you’re setting up a cluster or deploying an app or both, you want the results to be identical. So you want to say it’s the same app in different places,” he told me.

Now that doesn’t necessarily mean that every single underlying configuration is identical because, for example, if you’re running on AWS, you might use DynamoDB but if you’re running on Microsoft Azure, you might use CosmosDB. “But fundamentally for the end user it’s the same application, based on an identical set of software components, and they run the same way on the underlying services,” Richardson said.

This sounds like multi-cloud, but it’s not. Not really.

“This is easy to say,” Richardson said, “but quite hard to do.”

If you’re not in enterprise IT, running code at scale, this probably seems like a strange statement. Surely it should be simple to…