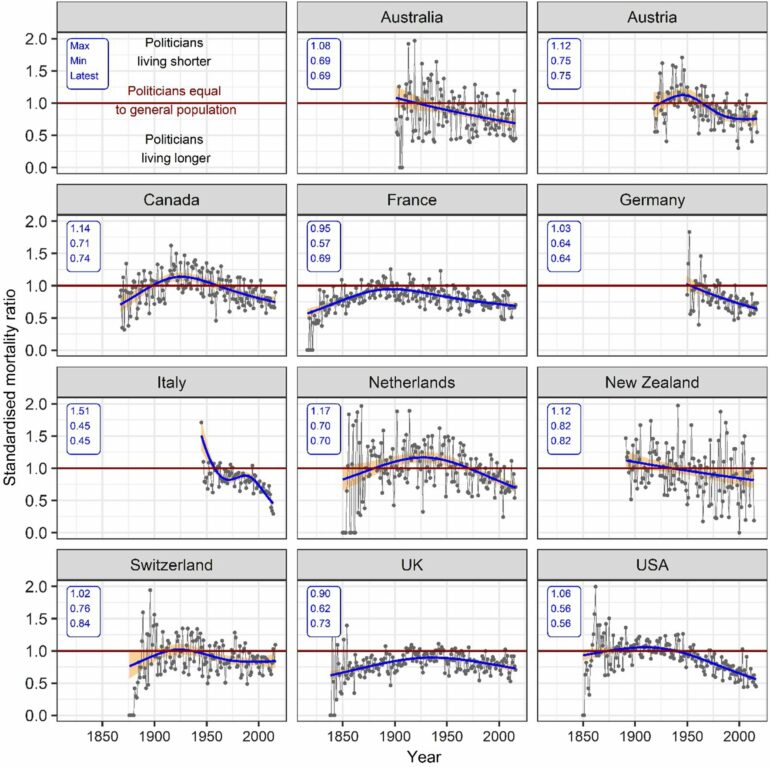 In recent years, improvements in life expectancy have stalled in many high-income countries, and even declined for those in the poorest societal groups. This is thought to reflect widening inequalities, which the COVID-19 pandemic has increased still further. For instance, the latest figures show that men in the most deprived areas in England are expected to live nearly 10 years less than those in the least deprived, while women in the same areas can expect to live seven years less (Department of Health and Social Care).

This has generated much interest in whether certain “elite,” high-status occupations, such as politics, are associated with better health. However, to date, studies that have compared mortality rates between politicians and the populations they represent have typically focused on one or a few countries. Today, a new study led by researchers at Oxford Population Health has published the most comprehensive analysis so far, based on data from 11 high income countries. The results have been published in the European Journal of Epidemiology.

The study collated information on politicians from Australia, Austria, Canada, France, Germany, Italy, the Netherlands, New Zealand, Switzerland, the U.K., and the U.S. For each country, data were available between 1945 and 2014, however the full analysis ranged from 1816 (France) to 2017.

Each politician was matched according to their country, age and gender to the mortality data from the equivalent section of the national population for that period of time. The researchers then compared the number of deaths among the politicians each year with the number expected based on population mortality rates.

The researchers also calculated the difference in remaining life expectancies at the age of 45 between politicians and the general population, for each consecutive 10 year period.

For almost all countries, politicians had similar rates of mortality to the general population in the late 19th and early 20th centuries.Throughout the 20th century, differences in mortality rates widened significantly across all countries, so that politicians had an increasing survival advantage over the general population.There was considerable variation between countries in the extent of this survival advantage. In recent years, for example, while in Italy a typical member of the general public was 2.2 times as likely to die within the next year as a politician of the same age and gender, in New Zealand they were only 1.2 times as likely.In several countries, the survival advantage of politicians is at its greatest level for the last 150 years, similar to that seen in the middle of the 19th century.The difference in life expectancy at age 45 between politicians and the general population also increased significantly during the second half of the 20th century. Currently, life expectancy gaps range from around 3 years in Switzerland to 7 years in the U.S.

Some may suggest that these differences in life expectancy may be due to politicians typically earning salaries well above the average population level (in the U.K., the basic annual salary for an MP from 1 April 2022 is £84,144). However, according to the researchers, while this may be part of the reason, these results suggest that other factors must also be at play. This is because income inequality (as measured by the share of overall income belonging to the richest in society) began to rise in the 1980s, but differences in life expectancy began to widen much earlier, before the 1940s.

The researchers suggest that the recent survival gains for politicians may be due to a variety of factors, including differences in standards of health care and lifestyle factors such as smoking and diet. The availability of improved therapies for medical conditions more likely to affect politicians (particularly cardiovascular diseases) may also play a role. They note, for instance, that both President Franklin Roosevelt and Prime Minister Winston Churchill suffered from hypertension and ultimately died of stroke. However, since antihypertensive drugs became widely available in the 1960s, the risk of death from circulatory diseases has decreased significantly.

It is also possible that the introduction of new campaigning methods (including television broadcasting and social media) changed the type of person who became a politician, and that this had an impact on life expectancy trends.

Spouse getting weight loss surgery? Your marriage might be in trouble

Dr. Laurence Roope, Senior Researcher in Oxford Population Health and a co-author of the study, said: “Our study is the largest to date to compare the mortality rate and life expectancy of politicians with those of the age and gender-matched general population. The results show that the survival advantage of politicians today is very high compared to that observed in the first half of the 20th century. It is interesting that the mortality gaps we document typically started rising half a century earlier than the well documented increases in income inequality from the 1980s.”

Philip Clarke, Professor of Health Economics at Oxford Population Health and lead author, added: “Reducing health inequalities is high on the agenda of the U.K. Government and many other Governments. A key challenge will be to find ways to raise the life-expectancy of the public to close gaps with elite groups such as politicians.”