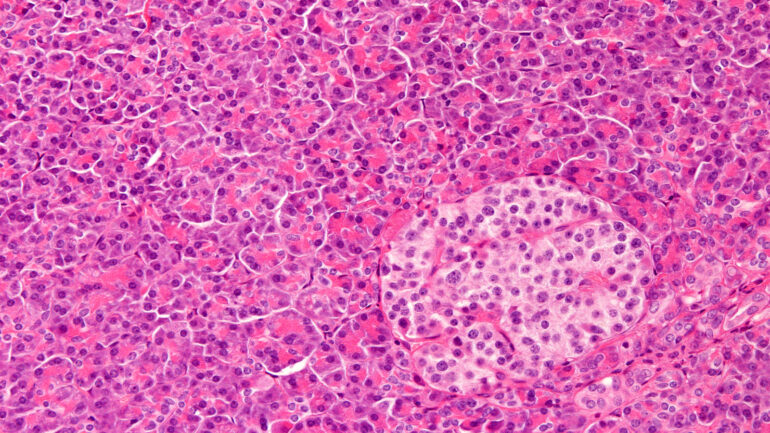 The lab of Kathy DelGiorno, assistant professor of cell and developmental biology, seeks to understand changes in the pancreas in response to injury and disease. In a recent project led by graduate student Leah Caplan, also from the Department of Cell and Developmental Biology, the lab investigated the formation of enteroendocrine cells—a collection of gastrointestinal and pancreatic cell types that secrete hormones in response to chemical or mechanical stimuli—throughout pancreatic tumor development.

In a recent paper published in Frontiers in Physiology, the researchers used histopathological analyses, genetically engineered animal models and human samples to quantify the subtypes of EECs throughout the development of pancreatic tumors. This work acknowledged the diversity within this cell population and sought to understand how different quantities of each EEC subtype could contribute to disease progression.

They discovered that numerous hormone-producing cells form early in pancreatic tumorigenesis, but that some of these cell types are then lost upon tumor formation. The data suggest that the hormones produced by the EEC subtypes that are lost aid in inhibiting disease progression or that the hormones produced in the subtypes that remain accelerate disease progression, or both. This work uncovered a previously unrecognized population of cells in the pancreas and potentially provides a way to determine how far the disease has progressed.

Pancreatic ductal adenocarcinoma, a type of pancreatic cancer, is particularly deadly, with only an 11 percent five-year survival rate. The low survival rate is largely due to late detection; by the time the disease is found, it has already spread to other areas of the body.

The DelGiorno laboratory will be following up on this research by using genetically engineered animal models to study the absence of EECs and several of the hormones they produce to determine their effects on pancreatic inflammation and tumorigenesis.

The identification of hormones produced at different stages of disease could lead to strategies for better detecting early-stage pancreatic cancer. Additionally, Caplan and co-investigators hope to identify mechanisms by which the pancreas inhibits tumorigenesis, which can then potentially be co-opted to inform better therapeutic options for patients.

What drives racial and ethnic gaps in Medicare’s quality program?