The best programming languages to learn in 2022 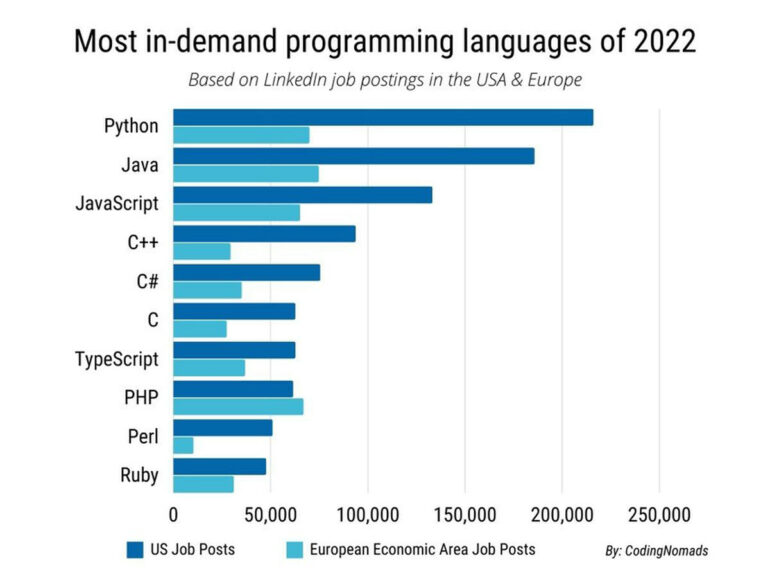 Based on job demand, Python is the top language, followed by Java, JavaScript, C++, C# and C, says CodingNomads.

One of the challenges for people pursuing a career in programming is deciding which languages to learn. With so many languages used for different purposes, choosing the ones you want to study will depend on the specialty that most interests you as well as on job demand. A report released on Tuesday by programming course site CodingNomads looks at the “best” programming languages for 2022.

If you’re excited by the data and logic side of coding, you may wish to learn Python, Java, C, C++ or C#. If you’re jazzed about visual design and user interfaces, TypeScript might be up your alley. And if you’re looking to develop mobile apps, you’d want to check out Java for Android, and Swift or Objective-C for Apple’s iOS.

Aside from satisfying your own professional interests, you naturally want to select a language that’s in demand among employers and promises a good salary. In this regard, CodingNomads examined the most popular languages based on job postings and on salary.

Looking at the greatest number of job postings on LinkedIn across the U.S. and Europe, CodingNomads awarded the top spot to Python. In second place was Java, with JavaScript, C++, C#, C, TypeScript, PHP, Perl and Ruby rounding out the top 10.

TypeScript was not listed separately because it had limited salary data. But CodingNomads deemed its salary similar to that for JavaScript jobs. Also, these figures are considered average salaries and not what beginning programmers would earn. But successful coders can expect to meet or beat these salaries within a couple of years, according to the report.

As a general purpose, server-side language, Python is used for a variety of tasks from simple scripting to advanced web applications and artificial intelligence. For developers interested in data science or machine learning as well as overall software development and web development, Python is the best language to learn, according to CodingNomads.

“While Python has been around for decades, the demand for Python skills in 2022 will continue growing exponentially thanks to its use in the booming industries of data science, machine learning and AI,” said Ryan Desmond, co-founder and lead instructor at CodingNomads. “In…