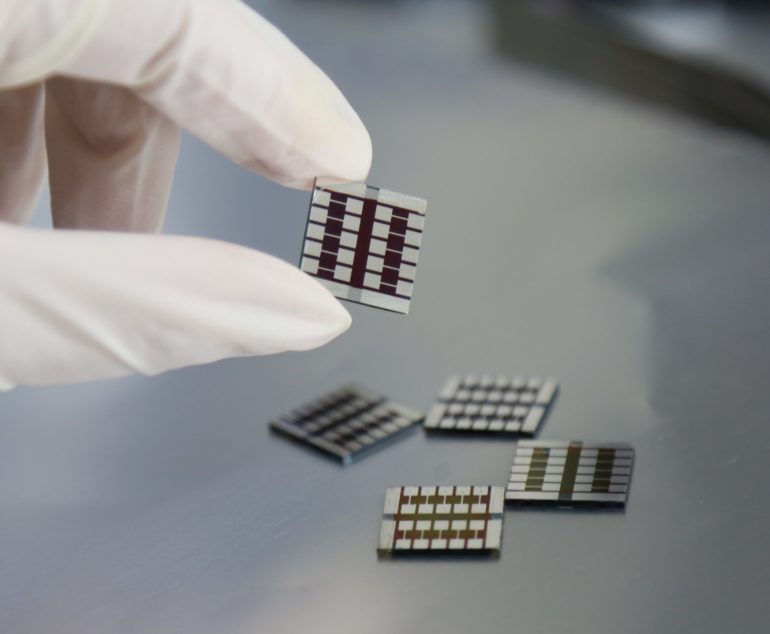 Scientists in China and Sweden have determined that a pinch of capsaicin, the chemical compound that gives chili peppers their spicy sting, may be a secret ingredient for more stable and efficient perovskite solar cells. The research, published January 13 in the journal Joule, determined that sprinkling capsaicin into the precursor of methylammonium lead triiodide (MAPbI3) perovskite during the manufacturing process led to a greater abundance of electrons (instead of empty placeholders) to conduct current at the semiconductor’s surface. The addition resulted in polycrystalline MAPbI3 solar cells with the most efficient charge transport to date.

“In the future, green and sustainable forest-based biomaterial additive technology will be a clear trend in non-toxic lead-free perovskite materials,” says Qinye Bao, a senior author of the study from East China Normal University. “We hope this will eventually yield a fully green perovskite solar cell for a clean energy source.”

While metal halide perovskite semiconductors represent a promising component for state-of-the-art solar cell technologies, they are plagued by nonradiative recombination, an undesirable electron-level process that reduces efficiency and exacerbates heat losses. Bao and colleagues sought out a natural, forest-based, inexpensive additive to overcome this limitation and enhance solar cell performance.

“Considering the electric, chemical, optical, and stable properties of capsaicin, we preliminarily found that it would be a promising candidate,” says Bao.

To test capsaicin’s capabilities, Bao and colleagues added 0.1 wt% of the compound (the optimal determined concentration) into a MAPbI3 perovskite precursor, which they used to fabricate solar cells. Next, the researchers performed a series of techniques, including ultraviolet photoelectron spectroscopy, X-ray photoelectron spectroscopy, and time-resolved photoluminescence to determine how the capsaicin additive affected the solar cells’ properties. They found that while control devices showed a power conversion efficiency of only 19.1%, devices containing capsaicin had an efficiency of 21.88% – nearly as high as the record 21.93% efficiency of single-crystal MAPbI3 devices. The enhanced solar cells also showed improved stability, maintaining more than 90% of their initial efficiency after 800 hours of storage in ambient air.

While capsaicin may provide a low-cost, widely available additive for the future development of scaled-up, highly efficient perovskite solar cells, Bao and colleagues note that further research is required to investigate the compound’s effect on non-toxic, lead-free perovskites such as inorganic perovskite and double perovskite. Additionally, the material’s stability must be further honed before it will be ready for commercial applications.

“We will further focus on the relationship between chemical structures of natural forest-based biomaterial additives, their interaction with photoactive materials, and the corresponding photovoltaic performance,” says Bao. “We hope to generate new knowledge of great value to further increase the power conversion efficiency and stability of perovskite solar cells.”