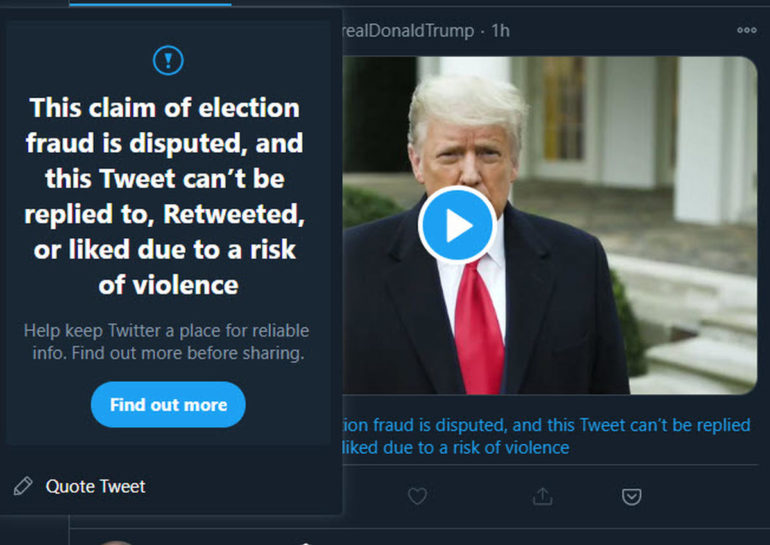 It’s been a riotous day in Washington D.C., one that ended with supporters of President Donald J. Trump storming the United States Capitol, overwhelming the Capitol Police, and interrupting a joint session of Congress that had just begun to certify the Electoral College vote and confirm the election of Trump’s duly elected successor, Joseph R. Biden.

It’s also been a tumultuous day on the President’s favorite social media platform. Twitter first slapped warning labels on three Trump tweets, prohibiting replies, retweets, or likes due to the “risk of violence.”

The deleted tweets included a video in which Trump repeatedly argued that his election was stolen as a result of widespread fraud. In another deleted tweet, Trump vaguely intimated that “These are the things and events that happen when a sacred landslide election victory is so unceremoniously stripped away from great patriots…”

Previously Twitter had labeled these sorts of claims with a mild label that warned that the claims of election fraud are “disputed.”

The @TwitterSafety account tweeted a series of announcements at roughly 7:00 PM Eastern time, starting with this notice: “As a result of the unprecedented and ongoing violent situation in Washington, D.C., we have required the removal of three @realDonaldTrump Tweets that were posted earlier today for repeated and severe violations of our Civic Integrity policy.”

“This means that the account of @realDonaldTrump will be locked for 12 hours following the removal of these Tweets. If the Tweets are not removed, the account will remain locked. Future violations of the Twitter Rules, including our Civic Integrity or Violent Threats policies, will result in permanent suspension of the @realDonaldTrump account.”

This isn’t the first time that Twitter has taken enforcement actions against Trump’s account. They’ve previously deleted tweets that spread misinformation about COVID-19, for example. But the 12-hour lockout and the threat of a permanent suspension is a significant escalation from Twitter, which had been hoping to avoid confronting the repeated violations before Trump’s term ends on January 20.

[This is a developing story.]