Amazon union vote is taking long. Here’s why and what could come next 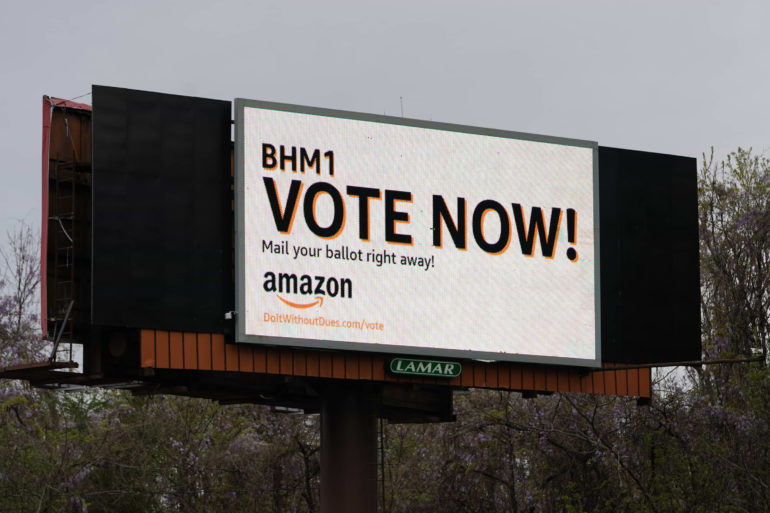 Amazon workers around the world are anxiously awaiting the results of a high-stakes union election at one of the company’s warehouses in Bessemer, Alabama.

Voting wrapped up on March 29 in the election to determine whether roughly 5,800 workers at the BHM1 warehouse will join the Retail, Wholesale and Department Store Union. Vote counting began the next day and the public portion of the count is expected to begin as soon as Wednesday.

The effort has shaped up to be one of the most consequential union elections in recent history. If they win, the workers would establish the first union at a U.S. Amazon facility, marking a major victory for workers in the face of Amazon’s staunch anti-union efforts.

The election is being closely watched by workers, labor advocates, politicians and other groups for its potential to kickstart future organizing attempts elsewhere. The RWDSU has already heard from more than 1,000 U.S. Amazon workers who are eager to organize.

With ballots mailed in and vote counting underway, it may seem that Amazon and the union are nearing the finish line in the election. But the process is likely far from over. Both sides can contest ballots, and depending on the outcome of the vote, further legal battles could lie down the road.

Here’s what to expect as the union election continues:

A week ago Tuesday, the first stage of counting kicked off via a private video conference. During this portion, the National Labor Relations Board will call out each voter’s name, which is listed on a yellow envelope that contains a sealed blue envelope with their marked ballot inside. The actual ballot that lists each worker’s vote is anonymous.

Amazon and the union will be allowed to contest ballots based on factors like whether an employee’s job title entitles them to vote or an illegible signature. Employee eligibility could shape up to be a major reason for contested ballots because turnover at Amazon warehouses can be high. Additionally, Reuters reported last month that ballots were sent out to some employees who no longer work at Amazon.

If the envelope is contested, it will be set aside. If it’s unchallenged, the NLRB will remove the blue ballot envelope and place it in the ballot box.

It’s unclear how many ballots were cast out of the 5,800 employees that were eligible to vote, but it’s likely that the NLRB will have to sort through thousands of envelopes. The sheer size of the bargaining unit, combined with the fact that votes were submitted via mail, has meant that the election process has taken longer than usual.

“When you have a facility that is that large, it adds to the amount of time that is going to be taken in the counting process,” said Mark Pearce, an NLRB chairman during the Obama administration and executive director of the Workers’ Rights Institute at Georgetown University Law Center. “So the timetable for a final count is kind of fluid.”

Last Friday, the NLRB finished sifting through half of the mailed-in ballots, putting them on track to begin the public portion of the vote count as soon as Wednesday, though the timing could still shift.

Once the private portion is complete, the NLRB will begin to count the unchallenged ballots in a public session open to members of the media. To win, the union needs a simple majority of the votes cast at Amazon’s Bessemer warehouse.

If there are enough challenged ballots to affect the outcome, the final tally will be temporarily halted until those challenges are resolved. “So that also puts more time on the clock before a final result comes in,” Pearce said.

Future challenges could prolong the process

Challenged ballots aren’t the only procedure that could prolong the process.

For instance, an employer could argue that a union gave out gifts to sway voters, or the union could file an objection or an unfair labor practice charge, saying that the employer gave out raises to induce workers to vote no, Pearce said.

Amazon could find itself in hot water when it comes to one particular benefit program, Pearce said. The company has an annual program, referred to as “The Offer,” that gives full-time workers the option to resign from their role in exchange for an exit bonus starting at $1,000.

“The Offer” wouldn’t be considered unlawful outside of an election, but the NLRB might consider the program to be an election violation during a union campaign, under the guise that it violated workers’ rights that are protected under the National Labor Relations Act, Pearce said.

“If that program is not suspended, there is most assuredly going to be objections and unfair labor practice charges filed with regard to that,” Pearce said. “The complaint could be that this program is inherently destructive of an employee’s right to pursue unionizing, even if the employer maintains that there’s no evidence of unlawful motive.”

The union could also raise objections over the placement of a U.S. Postal Service mailbox at the warehouse during the election. Labor experts have said that the mailbox, which was surrounded by a tent and a sign from Amazon encouraging workers to vote, could unduly influence workers by asserting that Amazon is involved in collecting and counting ballots. Amazon told AL.com in a statement that the box was installed by the U.S. Postal Service and that the USPS collects mail from the box.

An Amazon spokesperson didn’t immediately respond to a request for comment about the status of its resignation bonus program or the mailbox at the Bessemer warehouse.

Challenges to the vote tally might not end at the NLRB office in Alabama. Either party can appeal the regional director’s ruling to the NLRB board in Washington. The board could order a new election to be held, or if the board finds that the conduct was extraordinarily egregious, it could order Amazon to bargain with the union.

The board, which acts as a quasi-judicial body, is typically made up of five members. However, one seat remains vacant after Pearce finished his term in August 2018. Republicans have a 3-1 majority on the board, but one seat will be up for grabs when Trump-era appointee William Emanuel’s term expires in August.

“What the state of that will be by the time this has to come to the board is anybody’s guess,” Pearce said. “It could very well be that they’ll be a time when you have two Democrats and two Republicans and a resolution might be a challenge because it could be a 2-2 tie.”

There’s much more work to be done before the election could escalate to the NLRB’s headquarters. With all eyes on Bessemer, Pearce said, the public should feel reassured by the NLRB’s record of handling union elections judiciously.

“Tension is going to be mounting as the process goes forward, but I know one thing, those people on the ground running the election are dedicated folks,” Pearce said. “There is going to be a high degree of integrity in the process.”