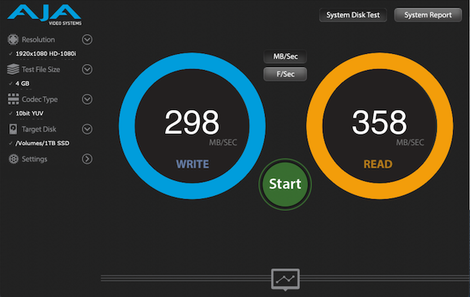 External notebook storage got a bad rap decades ago. Bulky hard drives sucked up power, or, worse, required a wall wart. Even with shock mounting, the fear of sudden drive failure was ever present.

But performance was the deal killer. USB 2 was only good for 25-30 MB/s. Firewire 800 more than doubled that, but wasn’t widely available.

Forget all that. Several trends have changed the external storage landscape.

Bandwidth performance: The M1 MacBook’s two Thunderbolt/USB 4 ports offer up to 40Gb/s (about a Blu-ray of data per second of bandwidth), which is as fast as the internally attached SSD. And PCIe/NVMe has crushed the typical SATA interface limit of 6Gb/sec

Latency performance: While bandwidth hero numbers get the large type, latency is the more important number because most transfers are small. With the advent of USB 4 – 10Gb/sec – and compact M.2 blade storage, your external storage latency is measured in microseconds, not milliseconds.

Translation: You’ll be hard pressed to notice the difference between your local drive and a PCIe/NVMe external drive over a 10Gb/s link.

So how good is it?

The slowest drive was a 1TB SATA SSD in a USB 3.1 enclosure.

Next up was a 1TB PCIe/NVMe SSD in a Type C USB enclosure.

The fastest drive was the internal SSD on my M1 MacBook Air.

The external PCIe/NVMe drive, attached over Type C USB 3.2, is about twice as fast as the SATA SSD. Not surprising, as most SATA implementations are 6Gb/sec, and USB 3.2 can handle about 1 gigabyte per second. SATA is the bottleneck, not the SSD.

Europe Is Launching a Giant Claw to Grab Space Junk

To put these numbers into perspective, 1 GB/sec means that a one megabyte file transfers in 1 millisecond. You won’t notice the difference between that and 1.5GB/sec, unless the transfer is several gigabytes, or the application is doing dozens of medium size transfers per second.

The chief conclusion? Stop buying SATA SSDs. Get PCIe/NVMe SSDs instead. The price difference is small, and you’ve future-proofed your external storage. And someday soon, I hope, 40Gb/sec USB 4 should come down in price, but today 10 GB/sec USB offers more bandwidth than the SATA interface provides.

Second, unless cost isn’t a concern – lucky you – paying Apple’s exorbitant storage prices isn’t necessary. You can get twice the capacity in a small, sturdy, lightweight package for three quarters of Apple’s price.

I used a Sabrent PCIe/NVMe USB Type-C tool-free enclosure with a Crucial M.2 SSD. The enclosure’s top is hinged, and a button push releases the latch. Install the SSD in a couple of minutes.

The M1 Macs are terrific machines. External storage expansion makes them a terrific bargain too.