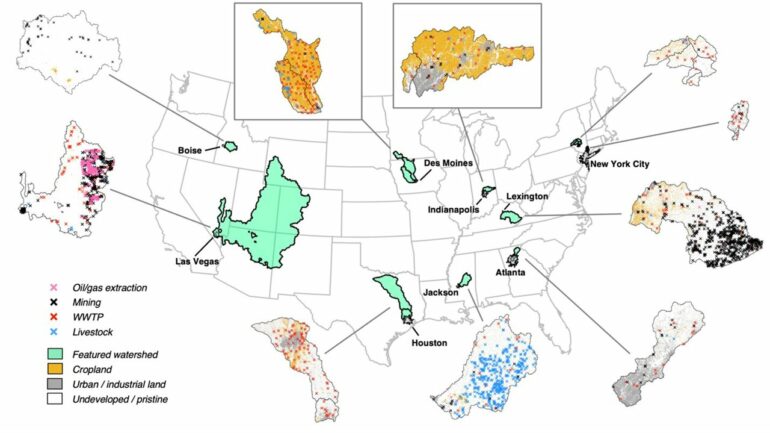 Every day, people across the United States turn on their faucets for a glass of drinking water, but few ever think about where their water originates. For the millions who dwell in urban areas, that water often comes from far away watersheds, land areas that channel rainfall and snowmelt to creeks, streams, and rivers. However, the way humans use land in these watersheds may affect the quality of the water that makes it to the supply system.

Researchers at Pacific Northwest National Laboratory (PNNL) have found a wide range of potential contamination in the surface drinking water sources of cities across the United States.

Their results, published in Nature Communications, highlight that the type and degree of human activities in watersheds have a major effect on the level of potential contamination in drinking water. Contaminants may come from agriculture, mining, urban areas, transportation infrastructure, wastewater treatment, and other industries. The data also shows a large diversity in human activities in source watersheds across the U.S. This translated into similarly diverse levels of potential contamination.

“Most large cities depend on surface water for their drinking water supplies,” said Sean Turner, a PNNL Earth scientist and lead author of the study. “This makes understanding what happens on watershed lands incredibly important. However, getting all that data can be complicated because cities often bring in water from multiple sources.”

By examining human activities across all the watersheds that act as drinking water sources the team could compare overall potential contamination across different cities. They pulled together disparate, publicly available data to be able to compare different cities.

“We were looking at utility websites and planning documents for 116 cities to complement a pre-existing dataset—called the Urban Water Blueprint—that defines source watershed locations for all the cities,” said Turner.

The team then used a tool they had developed to support this research, called gamut, to link data about human activity on the land surface with simulations of watershed runoff and river flow. This allowed the team to look at potential contamination from both wastewater treatment plants, or point sources, and runoff from developed land, or nonpoint sources. The analysis focused on surface water rather than groundwater sources of drinking water.

The researchers found that the most heavily impacted cities are primarily exposed to only one of the two potential contamination types. Very few cities had significant exposures to both point and nonpoint sources. For example, most cities in the Midwest draw their water from areas dominated by croplands. This ranks them highly for potential nonpoint contamination from agricultural runoff. Cities with high potential for contamination from point sources tend to draw water downstream of densely used urban land.

Of all cities with high potential point source contamination, Houston, Texas ranks at the top. Houston gets most of its water from Lake Livingston, which is downstream from Dallas and Fort Worth. Treated wastewater from these large urban areas makes its way into Lake Livingston, and eventually, into the Houston water supply.

What reduces a city’s exposure to potential contamination?

Perhaps unsurprisingly, the team found that cities with relatively low exposure to potential contamination have source watersheds with minimal human activities. For example, many cities in the western United States get their water from remote, mountainous watersheds. Other watersheds can also be intentionally protected, with restrictions placed on land use.

Study finds extreme heat is the ‘new normal’ for the ocean

“These results highlight the importance of understanding how human activities in source watersheds may lead to a wide range of water quality challenges for U.S. cities,” said Jennie Rice, a PNNL systems engineer and the project lead.