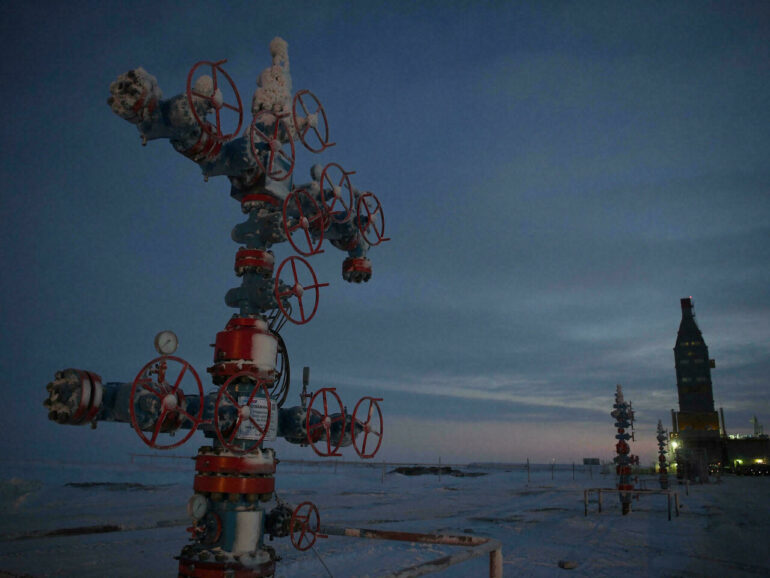 Thawing Arctic permafrost laden with billions of tonnes of greenhouse gases not only threatens the region’s critical infrastructure but life across the planet, according a comprehensive scientific review.

Nearly 70 percent of the roads, pipelines, cities and industry —mostly in Russia—built on the region’s softening ground are highly vulnerable to acute damage by mid-century, according to one of half-a-dozen studies on permafrost published this week by Nature.

Another study warns that methane and CO2 escaping from long-frozen soil could accelerate warming and overwhelm global efforts to cap the rise in Earth’s temperature at livable levels.

Blanketing a quarter of the northern hemisphere’s land mass, permafrost contains twice the carbon currently in the atmosphere, and triple the amount emitted by human activity since 1850.

By definition, it is ground that has been at temperatures colder than zero degrees Celsius (32F) for more than two years, though much permafrost is thousands of years old.

Temperatures in the Arctic region have risen two to three times more quickly over the last half-century than for the world as a whole—two to three degrees Celsius above pre-industrial levels.

The region has also seen a series of freakish weather anomalies, with temperatures in winter flaring up to 40C above previous averages.

Permafrost itself has, on average, warmed nearly 0.4C from 2007 to 2016, “raising concerns about the rapid rate of thaw and potential old carbon release,” note researchers led by Kimberley Miner, a scientist at the California Institute of Technology’s Jet Propulsion Laboratory.

Their study projects a loss of some four million square kilometres of permafrost by 2100 even under a scenario in which greenhouse gas emissions are significantly reduced in the coming decades.

Rising temperatures are not the only driver of accelerated melting.

Arctic wildfires rapidly expand the layer of permafrost subject to thawing, the researchers point out.

As the climate warms, these remote, uncontrolled blazes are projected to increase 130% to 350% by mid-century, releasing more and more permafrost carbon.

“These below-ground fires could release legacy carbon from environments previously thought to be fire-resistant,” Miner and colleagues warn.

The most immediate threat is to the region’s infrastructure.

Northern hemisphere permafrost supports some 120,000 buildings, 40,000 kilometres (25,000 miles) of roads and 9,500 kilometres of pipelines, according to another study led by Jan Hjort, a scientist at Finland’s University of Oulu.

“The strength of soil drops substantially as temperatures rise above the melting point and ground ice melts,” the study noted.

No country is more vulnerable than Russia, where several large cities and substantial industrial plant sit atop frozen soil.

Some 80 percent of buildings in the city of Vorkuta are already showing deformations caused by shifting permafrost.

Nearly half of oil and gas extraction fields in the Russian Arctic are in areas with permafrost hazards threatening current infrastructure and future developments.

In 2020, a fuel tank ruptured after its supports suddenly sank into the ground near the Siberian city of Norilsk, spilling 21,000 tonnes of diesel into nearby rivers.

Thawing permafrost was blamed for weakening the plant’s foundation.

North America does not have large industrial centres built on permafrost, but tens of thousands of kilometres of roads and pipelines are increasingly vulnerable too.

While scientists know far more than a decade ago, basic questions remain unanswered as to how much carbon may be released as Arctic soil warms.

As a result, “permafrost dynamics are often not included in Earth system models,” which means their potential impact of Earth’s rising temperature are not adequately taken into account, Miner and colleagues note.

This is especially true, they warn, for the sudden structural collapse of permafrost, a process known as thermokarst.

It is also still an open question as to whether climate shifts will cause the Arctic region to become drier or wetter.

The answer has huge implications.

“In a greener, wetter Arctic, plants will offset some or all permafrost carbon emissions,” the authors not.

In a browner, drier Arctic, however, CO2 emissions from decomposing soils and the amount of ever-more flammable fuels for wildfires will increase.

Permafrost covers 30 million square kilometres, roughly half of it in the Arctic, and a million km2 across the Tibetan Plateau. Most of the rest was covered when seas rose at the end of the last ice age.