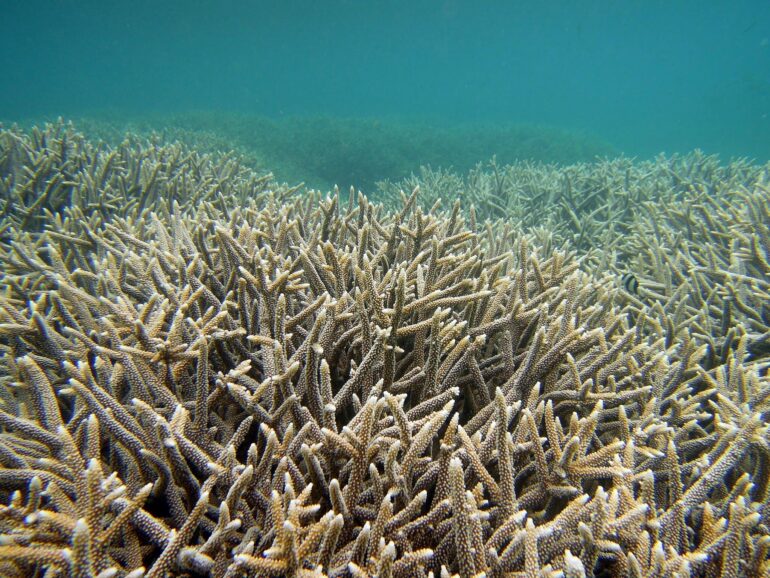 The changing conditions also have cultural and economic implications for the people whose traditions and livelihoods are dependent on ocean resources, said James Watson, an assistant professor in OSU’s College of Earth, Ocean, and Atmospheric Sciences and the paper’s co-author.

“What we’re looking at here is the potential extinction of a whole environment,” said Watson, who specializes in marine social-ecological systems and understanding complex adaptive systems. “In some places, the environments we have today are not going to exist in the future. We won’t be able to go visit them or experience them. It is an environmental, cultural and economic loss we can’t replace.”

60% to 87% of the ocean is expected to experience multiple biological and chemical changes, such as increases in water temperature, higher levels of acidity and changes in oxygen levels, by the year 2060.The rate of change is expected to be even higher, 76% to 97%, in very large marine protected areas such as Australia’s Great Barrier Reef Marine Park and the Galapagos Marine Reserve in Ecuador.Increases in pH, which measures ocean acidity, are expected as soon as 2030. Ocean acidification reduces the amount of carbonate in seawater, which is necessary for marine organisms, such as corals and mollusks like oysters, to develop their shells and skeletons.

The findings were published this week in the journal One Earth. The paper’s lead author is Steven Mana’oakamai Johnson, who conducted the research as part of his doctoral dissertation at Oregon State. Johnson, who earned his Ph.D. earlier this year, is now a postdoctoral researcher at Arizona State University.

The concept for the paper was borne from conversations between Johnson, a native of Saipan in the Northern Mariana Islands, a U.S. commonwealth in the Western Pacific Ocean, and Watson, a native of England, about what is likely to be lost due to climate change. One thing is the disappearance of ocean conditions they each experienced as children.

“All of us have experiences we define as normal under a given set of environmental conditions,” said Johnson, who is has already witnessed climate change impacts such as a devastating coral bleaching event in Saipan.

“Properties such as temperature, acidity and oxygen levels define what a given part of the ocean looks like. For both James and me, the ocean experience we grew up with and have memories of will likely not exist for our grandchildren.”

Using the last 50 years of ocean conditions as a measure of stability, the researchers used several climate models to see how six variables affecting ocean conditions might change as the planet warms. They used three warming scenarios with increasing degrees of severity.

“Our scenarios included likely, unlikely and highly unlikely degrees of warming, all of which are warmer today than they were 20 years ago,” Johnson said. “In all three scenarios, conditions in more than half of the ocean are going to be novel, meaning new and significantly different, than they have been in the last 50 years.”

Much of the change occurs in the ocean’s two extremes: the tropics and the Arctic. The warmest places are seeing warming conditions never seen before, and the coldest places, like the Arctic, are no longer as cold as they once were. The researchers also found that most of those changes will occur by 2060, though most of the change in pH, or acidity, levels is expected much sooner, by the end of the decade.

The change is more pronounced for the very large marine protected areas that are designed to preserve threatened species and rare habitats such as coral reefs around the world. As ocean conditions change, animals in those protected areas are likely to seek other locations that are more favorable for their survival.

“These marine protected areas are an important tool for achieving conservation goals and can take a lot of political and social will to establish and work as intended,” Johnson said. “In our analysis, 28 out of 29 of these areas will experience changes in conditions that could undermine conservation goals.”

The researchers’ findings present a picture of what the future might hold as the planet continues to warm, Johnson said. The research also offers important information to communities, policymakers and managers of protected habitats about how changing ocean conditions might impact them and how they might address those changes.

“For example, tuna thrive in certain ocean conditions. If the ocean gets too warm, the tuna may move to another area,” Johnson said. “If your country depends on tuna for food or livelihood, what impact will that have?

“Or if you’re a manager of a protected area, and you’re protecting a species that is no longer in the area, what do you do?”

This type of forecasting advances how climate change is quantified, Watson said. It also gives people an opportunity to come to terms with the trauma of what is being lost as well as begin to make plans for a future without those resources.

“This kind of work has been done before for changes on land due to climate change, but not for the ocean,” he said. “It’s important to acknowledge and accept what were are likely to lose, and that loss can also help motivate people to begin to adapt.”