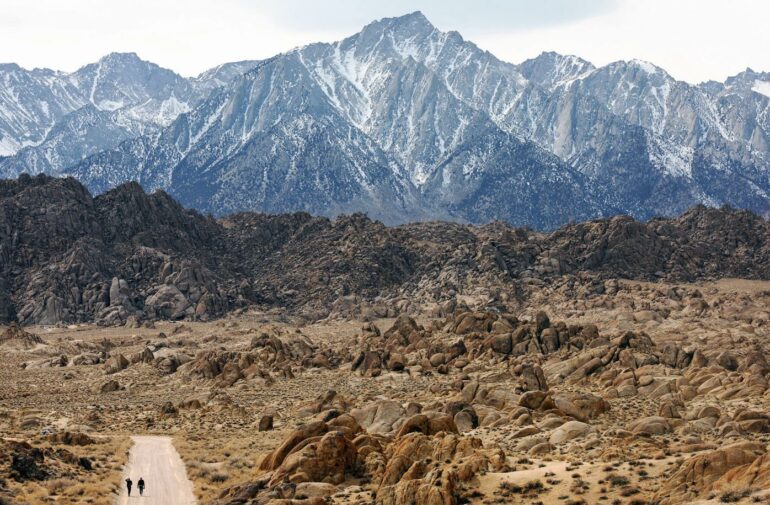 Thousands of years ago during the last Ice Age, rivers flowed from giant glaciers in the Sierra Nevada down to the Central Valley, carving into rock and gouging channels at a time when the sea level was about 400 feet lower. When the glaciers retreated, meltwater coursed down and buried the river channels in sediment.

These channels left by ancient rivers lie hidden beneath California’s Central Valley. Scientists call them paleovalleys, or incised valley fill deposits. As much as 100 feet deep and more than a mile wide in places, they are filled with coarse-grained sand, gravel and cobbles.

Because these paleovalleys are highly permeable, scientists have pointed to them as ideal pathways for water to quickly percolate down and recharge groundwater. That makes the underground channels especially valuable now in the Central Valley, where agricultural wells and pumps continue to draw down groundwater levels, and where managers of water agencies are looking for areas to capture floodwater to replenish depleted aquifers when California’s next big floods come.

The paleovalleys are rare geologic features in the Central Valley, where much of the ground has layers of impermeable clay and silt that impede the downward movement of water. Through years of painstaking research, scientists have pieced together data to identify a few of these areas, but they believe there may be a dozen or more of them along the eastern edge of the Central Valley.

In a new study, scientists have for the first time produced a detailed map of one of these paleovalleys, located on the Kings River alluvial fan between Fresno and Selma. By flying a helicopter equipped with an electromagnetic imaging system, they collected data to effectively peer beneath the ground and map what they say is one of the “fast paths” for recharging the valley’s aquifers.

“The central question is, is there an efficient way to find these massive features that could provide the natural infrastructure we need to recharge California’s groundwater?” said Rosemary Knight, a geophysics professor at Stanford University and the study’s lead author. “We need a fast, reliable, cost-effective way to find these pathways.”

Knight and other Stanford scientists focused on a paleovalley that starts at the Kings River, upstream of Centerville, and extends at least 29 miles toward the town of Easton, stretching more than a mile across. Working with study coauthor Graham Fogg, a hydrogeology emeritus professor at UC Davis, the scientists produced a three-dimensional map of the paleovalley and confirmed its location exactly where Fogg and his colleagues had discovered it in previous research.

Knight said the study, which was published Thursday in the journal Environmental Research Letters, showed that an airborne electromagnetic system can effectively map other large-scale channels that could serve as water pathways for managed aquifer recharge.

When the helicopter flew over the area in 2020, it dangled a large, hexagonagonal transmitter loop beneath it. Developed in Denmark, the system uses electricity to create a magnetic field. As it hovers over the earth, the system measures the degree to which different underground materials resist the flow of electrical current. This data provides a cross-section of the subsurface down to about 1,000 feet.

Knight likened it to doing an MRI of the earth, or using a metal detector to find buried metal based on its electrical properties.

Although the practice of recharging aquifers has been around for decades, it has taken on new importance as many areas of California seek to comply with the state’s 2014 Sustainable Groundwater Management Act. Intended to address the overpumping of groundwater, the law requires that many local agencies balance water use with available supplies by 2040.

During the current drought, which has brought the driest three-year period on record, farms in the Central Valley have continued to rely heavily on groundwater pumping. As water levels drop, a growing number of rural homeowners have been left with dry wells.

“Using floodwater to recover from and prepare for the next drought going forward just has to be an essential part of our freshwater strategy,” Knight said. “We need to tap into this natural network of pathways to move the water down, and out into the valley.”

There is a vast amount of space underground to store water. An estimated 140 million acre-feet of water has been depleted in the Central Valley, about three times the total storage capacity of all of California’s surface water reservoirs.

“If one’s looking for a place to put water, it’s clearly underground,” Fogg said. “Under climate change, with more water coming from flooding and more desire to divert some of that floodwater for recharge, it’s even more important to know where you could put that water and infiltrate it relatively rapidly.”

Two other paleovalleys have been found elsewhere in the Central Valley, including one near the American River in Sacramento County and one in the Modesto area, Fogg said. He said the infiltration rates of water at the Sacramento County site have been estimated to be 60 times higher than other locations in the area.

Fogg has called these hidden mini-canyons “the Yosemite Valleys of recharge sites, in terms of how special they are.” That’s where the analogy ends, though, because the paleovalleys are much shallower.

When more of these special recharge locations are found, Fogg said, managers of water agencies could not only accomplish more recharge, but also establish preserves to minimize contamination that could flow from the land to the aquifer.

“I’ve always felt It behooves us to know where they are so that we can exploit them and protect them,” Fogg said.

He said he thinks the main practical takeaway of the research is for the state to “use these methods to find the ones that are yet undiscovered.”

Erica Gies, a journalist and author, wrote about the scientists’ work revealing the ancient river channels in her book “Water Always Wins: Thriving in an Age of Drought and Deluge.” Gies says they are among the innovators in what she calls the Slow Water movement.

Gies said the electromagnetic imaging technology is a “game-changer” for finding more of the paleovalleys, which she said hold great potential for recharge.

Once the science is done and the features are mapped, Gies said, “then comes the work of deciding, are we going to set aside this land for that purpose? How is that going to work? How are we going to get water to it?”

“I hope that decision makers in the state and local areas can understand their importance and make use of them for recharge,” Gies said.

Once optimal sites for recharge are located, agencies could build infrastructure to move water to basins where it would infiltrate into the ground. Or they could find areas on farmlands where floodwater would go into the ground quickly.

The paleovalley that was mapped in the study lies below farmlands.

“We intend to capture as much as possible when the wet flood years come,” Chauhan said.

She said the study will give her and other water managers a tool “to properly site those basins so that we’re getting the maximum amount of recharge potential.”

With residents’ wells continuing to go dry in the area, stabilizing groundwater levels is a priority, she said. “The more water we can get into the underground, the more we can replenish the aquifer, the fewer wells that will go dry.”