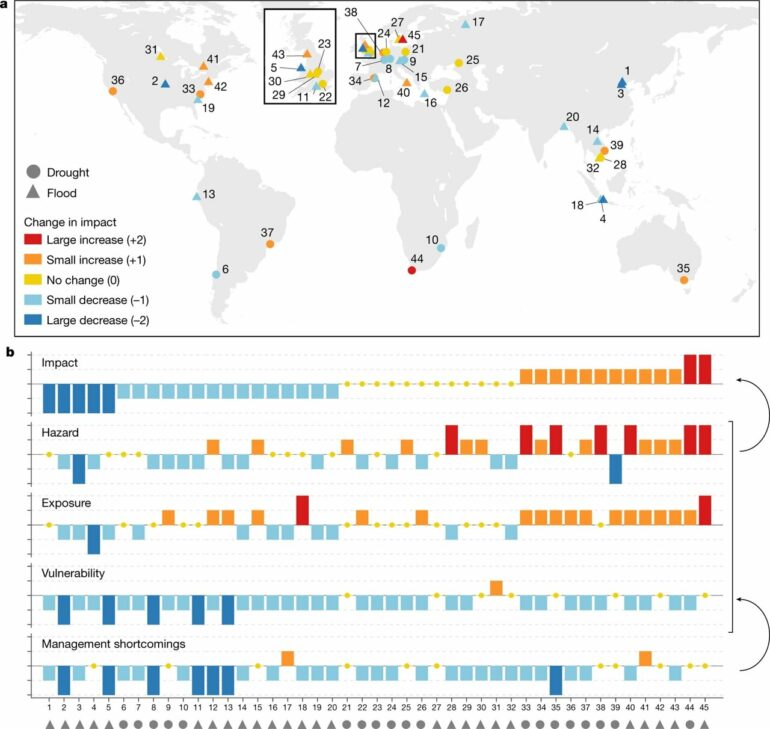 Risk management has reduced the vulnerability to floods and droughts around the world, but their impact is still increasing worldwide, according to a study published in the journal Nature, which includes the participation of the researcher María del Carmen Llasat, professor of Atmospheric Physics at the Faculty of Physics and member of the Water Research Institute (IdRA) of the University of Barcelona.

This intensification of the impact of natural phenomena is particularly noticeable when the second event (rain, floods or droughts) affecting the same region has a higher degree of hazard (more intensity and magnitude) than the first previously recorded event.

“This results from the fact that the improvement in management has been based on the parameters of previous episodes, but it has not been designed to cope with such extreme events. The difficulty observed in managing unprecedented events is alarming, especially if we consider that, as a result of the climate change, the hydrological events that are projected are becoming increasingly extreme,” notes Llasat.

The study, led by the expert Heidi Kreibich, from the German Research Centre for Geosciences (GFZ), includes the participation of nearly a hundred experts from the International Association of Hydrological Sciences (IAHS).

The study analyzes 29 pairs of flood episodes and 15 cases drought episodes in different areas of the world. The aim is to check how these factors involved in risk have changed between the first and the second episode, generally occurring more than ten years apart, but in the same place.

In the case of Catalonia, the study compared pluvial floods in Barcelona that occurred on September 21, 1995 and on September 6, 2018, and the recorded droughts in the periods 1986-1989 and 2004-2008. To carry this comparative analysis out, in the case of the rainfalls, the researchers worked in collaboration with Barcelona Water Cycle (BCASA)—the entity in charge of the pluvial rain management in Barcelona—and regarding the droughts, they worked in collaboration with the Ebro Observatory (URL-CSIC).

The international study has recorded only two success stories—Barcelona and Central Europe—in natural hazard management, out of the 29 pairs of flood events analyzed worldwide. In these cases, the hazard of the second recorded event was higher than that of the first, but the recorded damage was lower.

In the case of Barcelona, following the 1996 floods, the city promoted a plan that culminated in the construction of 15 rainwater retention basins and the improvement of the entire flood prevention and management system.

“The improvements in Barcelona’s rainwater network over the last twenty years have been decisive in alleviating the effects of floods in the city. In fact, while in the Metropolitan Area of Barcelona there has been a slight increase in flooding since 1981, this trend is negative in Barcelona. However, this is not enough,” notes Llasat, member of the Department of Applied Physics and head of the Group for the Analysis of Adverse Meteorological Situations (GAMA).

“The permeability of the soil should be increased with paving that allows rain to filter through, more areas should be set aside for green spaces and streets and drains should be kept clean. However, there are still neighborhoods with major flooding problems where it is difficult to take structural action, such as storm water tanks. In these cases, it is necessary to look for solutions that require citizen participation and awareness of this type of event.”

“Flood management in Germany and Austria is the other success story described in the article. Two common factors stand out in the successful strategies of Barcelona and Central Europe: the improvement of risk management governance—more integration in emergency management and early warning systems—and the implementation of a series of structural measures that required high investment (the storm water reservoirs in Barcelona or the construction of dykes in Central Europe).”

How to improve natural risk management?

Efforts to promote more operational and effective responses to these extreme events face a number of obstacles. “Large investments such as those made in the city of Barcelona or in Central Europe are not possible for everyone. In fact, they would not be desirable either. Recent studies have shown that they can lead to a false sense of security (especially in the case of river flooding), as they increase the occupation of flood zones and thus the associated risk.”

“Despite structural improvements,” she continues, “the United Nations consider that Barcelona is not doing enough to raise awareness of the risk of flooding among its inhabitants, nor among visiting people. This is a widespread problem,” Llasat says.

Improving governance, applying nature-based solutions and involving citizens are the global key actions for mitigating the effects of natural hazards worldwide, in a context of sustainable development.

“It is necessary for the Administration to improve its knowledge of risk, the distribution of the most flood-prone areas in the city, how to act when there are heavy rains, etc. Regarding the citizens, it is necessary to become aware that this risk will increase with climate change and that we will need citizen participation. Education in schools, compulsory information on flood risks, improved warnings to the population and guidelines on how to act both preventively and during the emergency are also some of the points that should be considered to reduce the impact of these natural events,” concludes Professor Llasat.