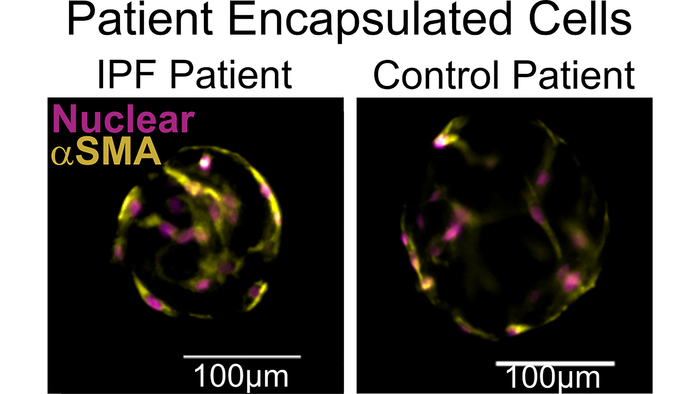 Idiopathic pulmonary fibrosis (IPF) is a deadly and rapidly progressing disease with no cure.

The disease involves abnormal interactions between lung cells, including fibroblasts, and their surrounding environment. Because of this, standard 2D cell culture models used for drug screening tend to perform poorly when predicting response to potential therapies.

Amid the COVID-19 pandemic and rising air pollution levels, incidence of IPF is anticipated to rise, urgently increasing the need for strong model systems.

In APL Bioengineering, from AIP Publishing, researchers from the University of Minnesota-Twin Cities and Mayo Clinic in Rochester, Minnesota, describe a 3D cell culturing platform that allows study of lung fibroblasts and their microenvironment. The platform enables measurement of cell behaviors and microenvironment changes involved in the disease progression of IPF, and the platform’s size and simplicity make it suitable for use in high-throughput drug screening protocols.

“IPF is a horrible disease that drastically impacts a patient’s life and eventually causes them to die from lack of oxygen,” said co-author Katherine Cummins. “It’s really important to have lab tools and models that create and control the microenvironment in which the cells sit, because this may be key to preclinical identification of possible treatments.”

Unlike rodent IPF models that do not mimic progressive disease and other cell culture systems that lack the surrounding microenvironment, their microtissue platform allows study of fibroblasts within an extracellular matrix (ECM). Changes in the ECM are a hallmark of IPF, so the system allows more relevant functional outputs. Moreover, its simplicity and tunability make it easy to use.

“Many organoid and lab-on-a-chip platforms can be hard to use,” said co-author David Wood. “What’s exciting is that this system is very easy to use. We’ve already disseminated it to two other labs who are using it completely independent of us.”

Validation of the system’s functioning focused primarily on ECM remodeling (i.e., cell-driven changes to the microenvironment) and cell contractility, which increases in activated, diseased fibroblasts.

Multiple tests for each of these two functions demonstrated the system robustly quantifies key aspects of fibrosis. These results were reproduced using patient-donated cells as well, indicating the system could be used for personalized medicine.

Moreover, the system’s versatility allows it to be used with different cell types and other matrix components, so it could be adapted for use in the study of other diseases where cell-microenvironment interactions contribute to disease. The research team has already used the system to study liver toxicity and anticipates it could be used across multiple solid organ systems, including in the study of cancer progression and metastasis.

Materials provided by American Institute of Physics. Note: Content may be edited for style and length.