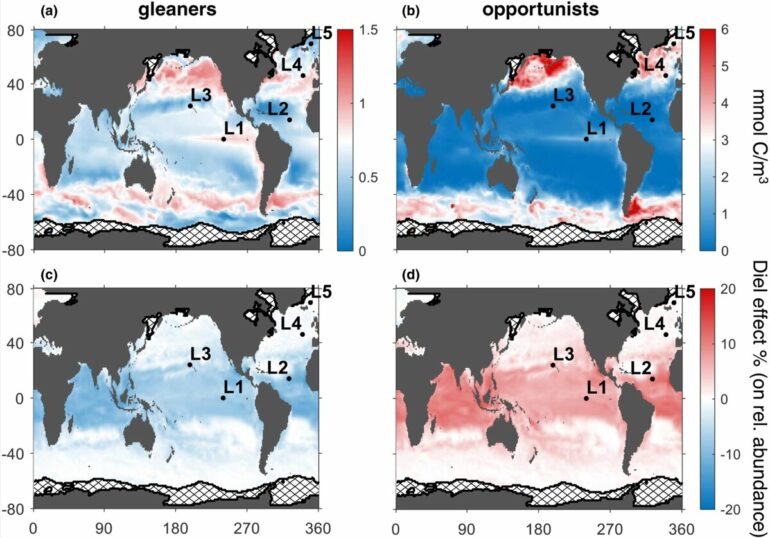 Phytoplankton is the foundation of all life on the planet. Understanding how these photosynthetic organisms react to their ocean environment is important to understanding the rest of the food web.

In spite of that, computer models of the global ocean biogeochemistry typically don’t include the day/night (diel) light cycle, even though that cycle is critical for photosynthesis in the ocean’s primary producers.

For the first time, scientists from the Ecosystems Center at the Marine Biological Laboratory (MBL) have incorporated the diel cycle into a global ocean model in order to investigate its effects on phytoplankton. Their study, published in Global Ecology and Biogeography, is the first to investigate how the day/night cycle affects the biogeography and diversity of these primary producers.

The model offered natural light and dark cycles over the global ocean to 15 simulated phytoplankton types. It was then compared to a control simulation using the same plankton model, but illuminated with light averaged over 24-hour periods. The goal was to see how diel light cycles affected phytoplankton productivity and changed nutrient concentration dynamics.

The simulated phytoplankton were all different cell sizes and separated into two different groups with two broad ecological strategies. “Gleaners” simulated smaller cells with high nutrient affinity (meaning they could capture nutrients out of the water column even if those nutrients were in low quantities) but slow growth, and “opportunists” simulated larger cells with higher maximum growth rate but low nutrient affinity (meaning they did better in nutrient-rich water). These were representations of real phytoplankton based on parameters from lab cultures.

The researchers found that the diel cycle did indeed matter to the simulated phytoplankton.

“We know that a lot of traits of different phytoplankton are based on the day/night cycle. Some dinoflagelletes go deeper [in the water column] to get more nutrients and then go up to photosynthesize. Some store carbon during the day, so they can use it at night,” says Ioannis Tsakalakis, MBL postdoctoral researcher and first author on the paper.

The model showed that diel cycles are associated with higher concentrations of limited nutrients, which meant that at lower latitudes (−40° to 40°), the simulated opportunists were more abundant than the gleaners compared to the control simulation. This includes phytoplankton like diatoms. This mechanism became less important at higher latitudes, where the effects of the seasonal light cycle were stronger than the day/night cycles.

If scientists don’t understand how phytoplankton are getting their energy as primary producers at the base of the food web, it’s hard to make inferences about the interactions of the rest of that global ocean food web—all the way up to humans.

So why has no one included the diel cycle before?

The global ocean is huge, and so are the models that represent it. To grapple with the complexities of what happens in the ocean, modelers often simplify certain processes. Typical models incorporate only seasonal light shifts rather than adding the more fine-grained details of the day/night cycle. This is mostly a computational decision, says MBL Senior Scientist Joe Vallino, senior author on the paper. “If you’re not resolving fine time detail, in general, [the models] run faster.”

“You’re pushing against the hardware constraints,” says Vallino. “You don’t want to have a 10-year simulation take 10 years to simulate.”

“This model contributes to advancing our fundamental understanding of how the ocean works,” says Vallino, adding that as scientists make better ocean models, eventually they may use them to investigate possible solutions to climate change while minimizing unintended consequences.

“Being able to predict how the distribution of phytoplankton will change is going to have repercussions higher up the food web,” says Vallino. “If you can’t get that base change right, you can’t get anything that’s connected to that above it.”