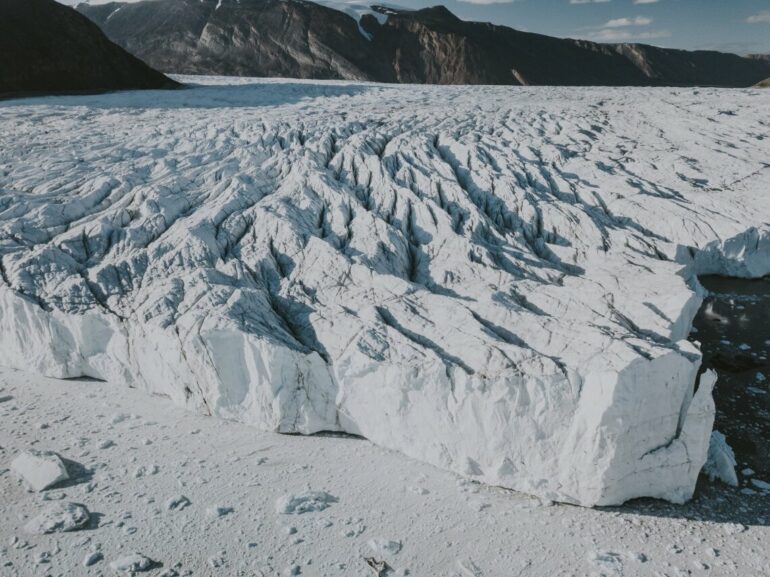 A new study led by University of Arizona researchers may have solved two mysteries that have long puzzled paleo-climate experts: Where did the ice sheets that rang in the last ice age more than 100,000 years ago come from, and how could they grow so quickly?

Understanding what drives Earth’s glacial–interglacial cycles—the periodic advance and retreat of ice sheets in the Northern Hemisphere—is no easy feat, and researchers have devoted substantial effort to explaining the expansion and shrinking of large ice masses over thousands of years. The new study, published in the journal Nature Geoscience, proposes an explanation for the rapid expansion of the ice sheets that covered much of the Northern Hemisphere during the most recent ice age, and the findings could also apply to other glacial periods throughout Earth’s history.

About 100,000 years ago, when mammoths roamed the Earth, the Northern Hemisphere climate plummeted into a deep freeze that allowed massive ice sheets to form. Over a period of about 10,000 years, local mountain glaciers grew and formed large ice sheets covering much of today’s Canada, Siberia and northern Europe.

While it has been widely accepted that periodic “wobbling” in the Earth’s orbit around the sun triggered cooling in the Northern Hemisphere summer that caused the onset of widespread glaciation, scientists have struggled to explain the extensive ice sheets covering much of Scandinavia and northern Europe, where temperatures are much more mild.

Unlike the cold Canadian Arctic Archipelago where ice readily forms, Scandinavia should have remained largely ice-free due to the North Atlantic Current, which brings warm water to the coasts of northwestern Europe. Although the two regions are located along similar latitudes, the Scandinavian summer temperatures are well above freezing, while the temperatures in large parts of the Canadian Arctic remain below freezing through the summer, according to the researchers. Because of this discrepancy, climate models have struggled to account for the extensive glaciers that advanced in northern Europe and marked the beginning of the last ice age, said the study’s lead author, Marcus Lofverstrom.

“The problem is we don’t know where those ice sheets (in Scandinavia) came from and what caused them to expand in such a short amount of time,” said Lofverstrom, an assistant professor of geosciences and head of the UArizona Earth System Dynamics Lab.

To find answers, Lofverstrom helped develop an extremely complex Earth-system model, known as the Community Earth System Model, which allowed his team to realistically recreate the conditions that existed at the beginning of the most recent glacial period. Notably, he expanded the ice-sheet model domain from Greenland to encompass most of the Northern Hemisphere at high spatial detail. Using this updated model configuration, the researchers identified the ocean gateways in the Canadian Arctic Archipelago as a critical linchpin controlling the North Atlantic climate and ultimately determining whether or not ice sheets could grow in Scandinavia.

The simulations revealed that as long as the ocean gateways in the Canadian Arctic Archipelago remain open, Earth’s orbital configuration cooled the Northern Hemisphere sufficiently to allow ice sheets to build up in Northern Canada and Siberia, but not in Scandinavia.

In a second experiment, the researchers simulated a previously unexplored scenario in which marine ice sheets obstructed the waterways in the Canadian Arctic Archipelago. In that experiment, the comparatively fresh Arctic and North Pacific water—typically routed through the Canadian Arctic Archipelago—was diverted east of Greenland, where deep water masses typically form. This diversion led to a freshening and weakening of the North Atlantic deep circulation, sea ice expansion, and cooler conditions in Scandinavia.

“Using both climate model simulations and marine sediment analysis, we show that ice forming in northern Canada can obstruct ocean gateways and divert water transport from the Arctic into the North Atlantic,” Lofverstrom said, “and that in turn leads to a weakened ocean circulation and cold conditions off the coast of Scandinavia, which is sufficient to start growing ice in that region.”

“These findings are supported by marine sediment records from the North Atlantic, which show evidence of glaciers in northern Canada several thousand years before the European side,” said Diane Thompson, assistant professor in the UArizona Department of Geosciences. “The sediment records also show compelling evidence of a weakened deep ocean circulation before the glaciers form in Scandinavia, similar to our modeling results.”

Together, the experiments suggest that the formation of marine ice in northern Canada may be a necessary precursor to glaciation in Scandinavia, the authors write.

Pushing climate models beyond their traditional application of predicting future climates provides an opportunity to identify previously unknown interactions in the Earth system, such as the complex and sometimes counterintuitive interplay between ice sheets and climate, Lofverstrom said.

“It is possible that the mechanisms we identified here apply to every glacial period, not just the most recent one,” he said. “It may even help explain more short-lived cold periods such as the Younger Dryas cold reversal (12,900 to 11,700 years ago) that punctuated the general warming at the end of the last ice age.”