Observed changes in daily precipitation intensity: It’s raining harder in the US 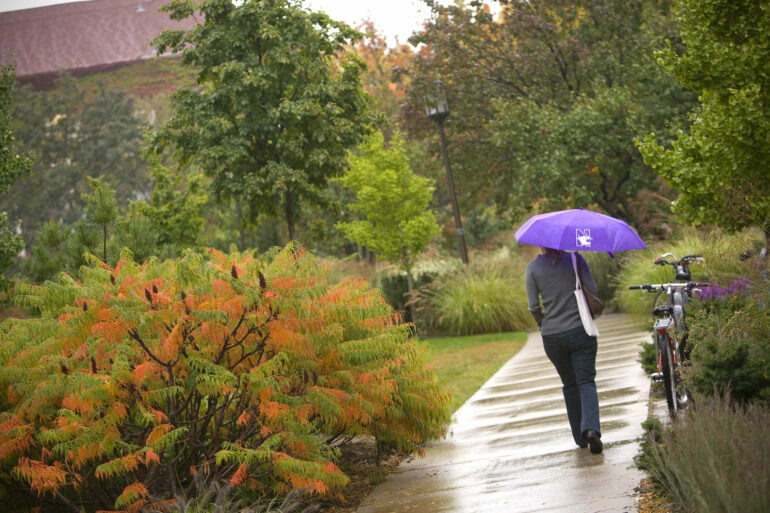 Just like the old adage says: When it rains, it pours.

That turns out to be increasingly true for much of the United States, according to Northwestern University researchers.

In a new study, researchers compared observed rainfall from two climatologically distinct time periods and across 17 different climate regions in the U.S. They found that when it’s rained in recent decades, it’s rained more. In most regions, the intensity of the rainfall has shifted from lighter to more moderate and often heavy deluges.

The study was published in Geophysical Research Letters.

“When people study how climate change has affected weather, they often look at extreme weather events like floods, heatwaves and droughts,” said Northwestern’s Daniel Horton, the study’s senior author. “For this particular study, we wanted to look at the non-extreme events, which are, by definition, much more common. What we found is pretty simple: When it rains now, it rains more.”

Horton is an assistant professor of Earth and planetary sciences in Northwestern’s Weinberg College of Arts and Sciences, where he also leads the Climate Change Research Group. Ryan Harp, an Ubben Postdoctoral Research Fellow at the Institute for Sustainability and Energy at Northwestern, is the paper’s first author.

To conduct the study, Harp and Horton compared two climatologically distinct time periods: 1951-1980 and 1991-2020. For each time period, they used historical precipitation data from the Global Historical Climatology Network, a publicly available database maintained by the National Oceanic and Atmospheric Administration.

Then, the researchers analyzed the observations within 17 distinct climate regions in the United States. These regions reflect differences in temperature, precipitation, vegetation and ecosystem dynamics.

After analyzing data from two time periods across regions, Harp and Horton discovered that precipitation intensity (including rain and snow) had increased across much of the United States, particularly in the East, South and Midwest. Changes in the western United States were not detected.

“Not only do we see increasing precipitation intensity for regions east of the Rockies,” Harp said, “but the intensities are becoming more variable as well, making water resource management even more challenging.”

In this study, Harp and Horton narrowed their focus to examine how much precipitation falls during each rain or snowfall event. For their next study, they plan to investigate if annual precipitation is becoming more variable and if precipitation events are becoming more or less frequent. Although this study does not attribute the changes in precipitation rates to climate change, Harp said the findings are consistent with human-caused global warming and climate model predictions.

“Warmer air holds more moisture,” he explained. “For every one degree Celsius the atmosphere warms, it holds 7% more water vapor. So these observations are consistent with the predicted effects of human-caused global warming.”

Increased precipitation intensities affect many sectors, including agriculture and infrastructure, as well as lead to increased risks of landslides and flooding. Horton hopes the study findings can be used by resource managers, policy makers and urban planners to design infrastructure that is more resilient to changing weather patterns.

“You don’t need an extreme weather event to produce flooding,” Horton said. “Sometimes you just need an intense rainstorm. And, if every time it rains, it rains a little bit more, then the risk of flooding goes up.”