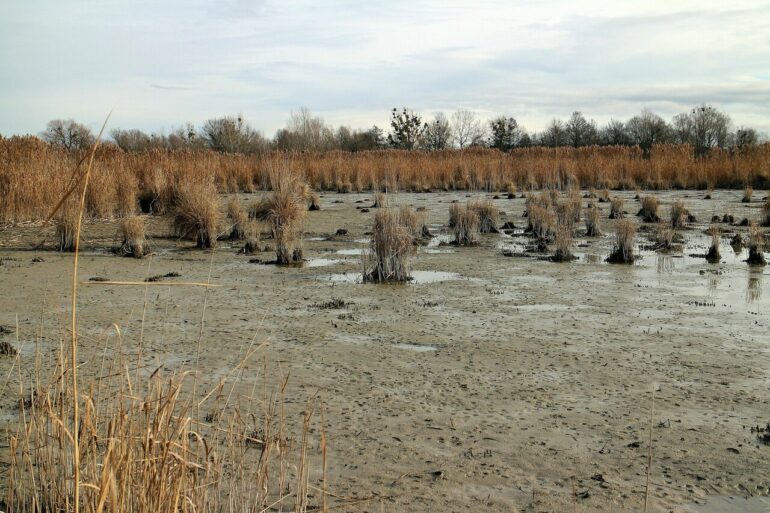 River deltas and their adjoining wetlands are being threatened by rising sea levels and decreased river sediment loads. Better understanding how coastlines along river deltas are created and sustained will be critical to preserving and even restoring them in the future.

River deltas like the Mississippi Delta are built by sediment in different ways. One way is through rivers, which build immense lobes of sand on which cities like New Orleans are constructed. Another way is through marshes, where muds and organic detritus accumulate as squishy, wet sponges that cover thousands of square miles.

While it is clear both types of sediment accumulation are important, it was unknown how these two types of accumulation interacted over thousands of years. To gain insight, Sanks and her colleagues built an experimental river delta at the Tulane University’s Sediment Dynamics Laboratory. At the lab, they ran a small river of water and sediment into a science-grade bathtub that represented both river and marsh accumulation.

Surprisingly, the team found that a small addition of marsh sediment (approximately 8 percent of the mass of the system) almost doubles the area of marshes on a river delta. This is because marsh accumulation tends to flatten the slopes of a river delta, leading to more area near sea level that can host marsh. The paper argues that this feedback could explain the existence of the immense delta plains that exist on many of the world’s river deltas.

For example, the Mississippi Delta has over 5,000 square miles within a few feet of sea level. These regions are susceptible to detrimental impacts from rising sea levels and decreased sediment supply due to dams and levees. Since the experiment with marsh sedimentation is a better representation of global deltas, the findings can help improve future coastal restoration and management plans that typically hinge on the successful distribution and retention of riverine sediment.

“This project is a unique product of Kelly’s strong background in marsh science and my research program focusing on river deltas,” Shaw said. “It never would have happened without the will to combine these complementary strengths.”

The paper was published in Geophysical Research Letters.