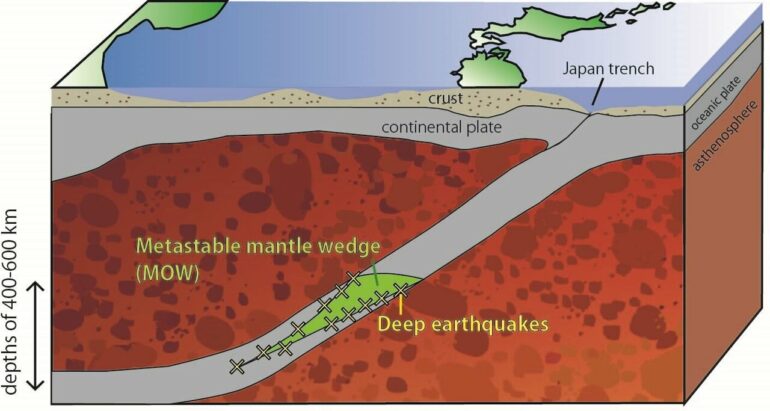 Earthquakes which occur at depths of several hundred kilometers in the mantle are called “deep-focus earthquakes”. Such earthquakes occasionally result in serious disasters such as the 1994 Bolivian earthquake, which occurred at a depth of 638 km with a magnitude of 8.3.

The cause of deep-focus earthquakes, however, has been a mystery, because earthquakes occur with the rapid sliding of a fault, which is difficult under the great pressures of the deep mantle. Attempts have been made to understand the mechanism of occurrence of deep-focus earthquakes based on laboratory deformation experiments, but experiments under deep mantle conditions have not been made due to technological limitations.

A team has, for the first time, performed deformation experiments on natural olivine, the major mineral of the mantle and subducting oceanic lithosphere (slab), by our state-of-the-art, large-volume, deformation apparatus in combination with synchrotron X-ray observations. They observed the occurrence of major faulting in the sample by X-ray imaging under deep mantle conditions and associated “earthquakes” by ultrasonic acoustic emission measurements.

After careful analyses of the recovered sample, they found the faulting was induced by the growth of “new” olivine with ultra-fine grains of tens of nanometers upon the phase transformation of “old” olivine, which worked as a lubricant for the rapid sliding of the fault. They also found evidence that the sample was locally melted along the fault due to the very high temperature caused by the rapid sliding. Their model, based on these laboratory experiments, well explains the distribution of deep-focus earthquakes, which increase with depths from ~400 km to ~600 km, where the metastable “old” olivine is expected to form ultra-fine grained “new” olivine.

Our cities are warming and urban greenery could help

Citation:
Phase transitions in olivine may be the cause of deep seismic faulting (2022, September 16)