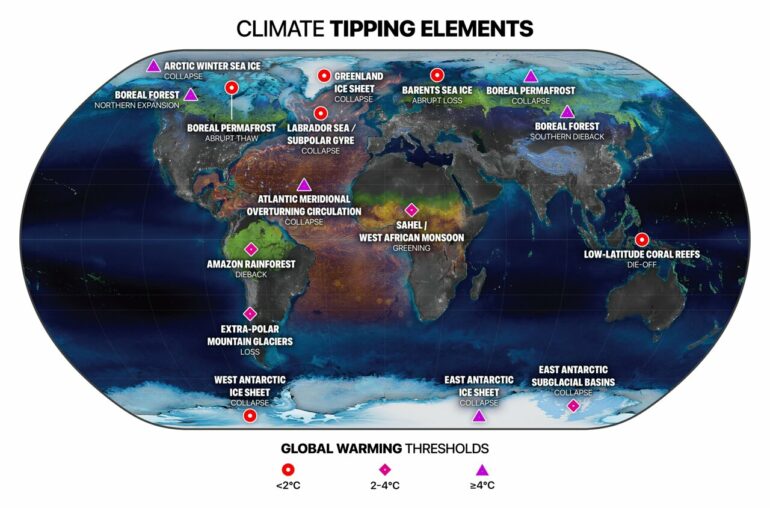 Multiple climate tipping points could be triggered if global temperature rises beyond 1.5°C above pre-industrial levels, according to a major new analysis published in the journal Science. Even at current levels of global heating the world is already at risk of passing five dangerous climate tipping points, and risks increase with each tenth of a degree of further warming.

An international research team synthesized evidence for tipping points, their temperature thresholds, timescales, and impacts from a comprehensive review of over 200 papers published since 2008, when climate tipping points were first rigorously defined. They have increased the list of potential tipping points from nine to sixteen.

The research, published in advance of a major conference Tipping Points: From Climate Crisis to Positive Transformation at the University of Exeter (September 12–14th), concludes human emissions have already pushed Earth into the tipping points danger zone. Five of the sixteen may be triggered at today’s temperatures: the Greenland and West Antarctic ice sheets, widespread abrupt permafrost thaw, collapse of convection in the Labrador Sea, and massive die-off of tropical coral reefs. Four of these move from possible events to likely at 1.5°C global warming, with five more becoming possible around this level of heating.

Lead author David Armstrong McKay from Stockholm Resilience Center, University of Exeter, and the Earth Commission says, “We can see signs of destabilization already in parts of the West Antarctic and Greenland ice sheets, in permafrost regions, the Amazon rainforest, and potentially the Atlantic overturning circulation as well. The world is already at risk of some tipping points. As global temperatures rise further, more tipping points become possible. The chance of crossing tipping points can be reduced by rapidly cutting greenhouse gas emissions, starting immediately.”

The Sixth Assessment Report of the Intergovernmental Panel on Climate Change (IPCC), stated that risks of triggering climate tipping points become high by around 2°C above preindustrial temperatures and very high by 2.5–4°C.

This new analysis indicates that Earth may have already left a “safe” climate state when temperatures exceeded approximately 1°C warming. A conclusion of the research is therefore that even the United Nations’ Paris Agreement goal to limit warming to well-below 2°C and preferably 1.5°C is not enough to fully avoid dangerous climate change. According to the assessment, tipping point likelihood increases markedly in the “Paris range” of 1.5–2°C warming, with even higher risks beyond 2°C.

The study provides strong scientific support for the Paris Agreement and associated efforts to limit global warming to 1.5°C, because it shows that the risk of tipping points escalates beyond this level. To have a 50% chance of achieving 1.5°C and thus limiting tipping point risks, global greenhouse gas emissions must be cut by half by 2030, reaching net-zero by 2050.

Co-author Johan Rockström, co-chair of the Earth Commission and director of the Potsdam Institute for Climate Impact Research says, “The world is heading towards 2–3°C of global warming. This sets Earth on course to cross multiple dangerous tipping points that will be disastrous for people across the world. To maintain livable conditions on Earth, protect people from rising extremes, and enable stable societies, we must do everything possible to prevent crossing tipping points. Every tenth of a degree counts.”

Co-author Tim Lenton, director of the Global Systems Institute at the University of Exeter and a member of the Earth Commission says, “Since I first assessed climate tipping points in 2008 the list has grown and our assessment of the risk they pose has increased dramatically. Our new work provides compelling evidence that the world must radically accelerate decarbonizing the economy to limit the risk of crossing climate tipping points. To achieve that we now need to trigger positive social tipping points that accelerate the transformation to a clean energy future. We may also have to adapt to cope with climate tipping points that we fail to avoid, and support those who could suffer uninsurable losses and damages.”

Scouring paleoclimate data, current observations, and the outputs from climate models, the international team concluded that 16 major biophysical systems involved in regulating Earth’s climate (so-called “tipping elements”) have the potential to cross tipping points where change becomes self-sustaining. That means even if temperature stops rising, once the ice sheet, ocean or rainforest has passed a tipping point it will carry on changing to a new state. How long the transition takes varies from decades to thousands of years depending on the system. For example, ecosystems and atmospheric circulation patterns can change quickly, while ice sheet collapse is slower but leads to unavoidable sea level rise of several meters.

The researchers categorized the tipping elements into nine systems that affect the entire Earth system, such as Antarctica and the Amazon rainforest, and a further seven systems that if tipped would have profound regional consequences. The latter include the West African monsoon and the death of most coral reefs around the equator. Several new tipping elements such as Labrador Sea convection and East Antarctic subglacial basins have been added compared to the 2008 assessment, while Arctic summer sea ice and the El Niño Southern Oscillation (ENSO) have been removed for lack of evidence of tipping dynamics.

Co-author Ricarda Winkelmann, a researcher at the Potsdam Institute for Climate Impact Research and a member of the Earth Commission says, “Importantly, many tipping elements in the Earth system are interlinked, making cascading tipping points a serious additional concern. In fact, interactions can lower the critical temperature thresholds beyond which individual tipping elements begin destabilizing in the long-run.”

Armstrong McKay says, “We have made a first step towards updating the world on tipping point risks. There is an urgent need for a deeper international analysis, especially on tipping element interactions, towards which the Earth Commission is starting a Tipping Points Model Intercomparison Project.”