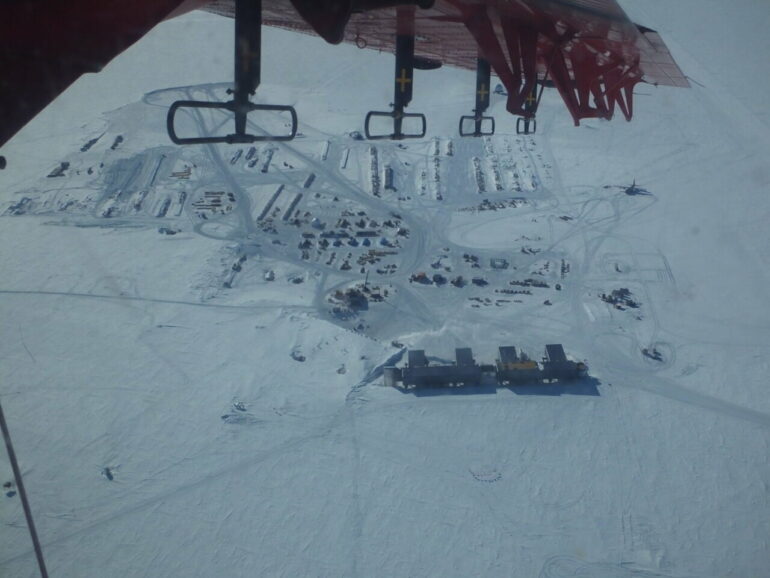 East Antarctica is the least known region of Earth. Studying this remote part of the continent is extremely difficult, requiring researchers to look beneath kilometers of blanketing ice.

A team of scientists from the European Space Agency (ESA) and British Antarctic Survey (BAS) have done exactly this though for a new study published today in the journal, Communications Earth & Environment.

The international team behind the study, which included BAS’s Dr. Tom Jordan, flew over East Antarctica using devices which measure changes in the magnetic and gravity signatures produced by the different rocks hidden beneath the ice. The data they gathered enabled them to determine key characteristics of the rocks, providing tantalizing new clues about how the edge of East Antarctica evolved.

To the surprise of the team, the new data showed that an area of ancient rocks the size of the UK, which was thought to make up part of East Antarctica’s coast is entirely missing. In its place, they found an embayment made up of younger rocks than expected. This suggests that less of East Antarctica than previously assumed formed part of the ancient continent from which Antarctica formed.

The consequences of this finding will form the basis of a wide range of Antarctic research. It will help researchers building global reconstructions of Earth’s ancient supercontinents, and those trying to understand how the ancient geology of East Antarctica influences the flow and stability of the modern ice sheet.

Dr. Tom Jordan, lead author of the study and BAS geologist and geophysicist, said, “It’s as if a huge bite has been taken out of East Antarctica. This probably happened during a major rifting event, likely linked to the opening of the ancient Pacific Ocean about 650 million years ago. Understanding that East Antarctica isn’t a single uniform continental block changes how we think about the continent’s tectonics. This embayment in the South Pole region likely influenced how mountain ranges and volcanoes grew in the area, and the scars at the edge of where the embayment once was continue to guide the flow of the present-day ice sheet.”

The study was made possible by the international collaborative ESA PolarGap campaign. The main aim of this mission was to augment the GOCE satellite gravity field in the polar gap region around South Pole, where satellite measurements were missing. By careful survey design and planning, a broad spectrum of science results has emerged in this previously largely unexplored frontier in East Antarctica.

Dr. Fausto Ferraccioli, PI of the ESA project and currently director at the National Institute of Oceanography and Applied Geophysics, said, “Finding out where the edge of the East Antarctic craton lies helps constrain the extent of East Antarctica in ancient supercontinents. Edges of cratons also exert a key influence on geothermal heat flux. Lower values are typically found on the craton side compared to younger embayments. The new data will help determine if this is the case also at South Pole, with cascading implications for understanding how this affects the water that flows beneath the East Antarctic Ice Sheet.”

The paper, “An embayment in the East Antarctic basement constrains the shape of the Rodinian continental margin,” by Jordan, T., Ferraccioli, F., and Forsberg, R., is available to read in Communications Earth & Environment.