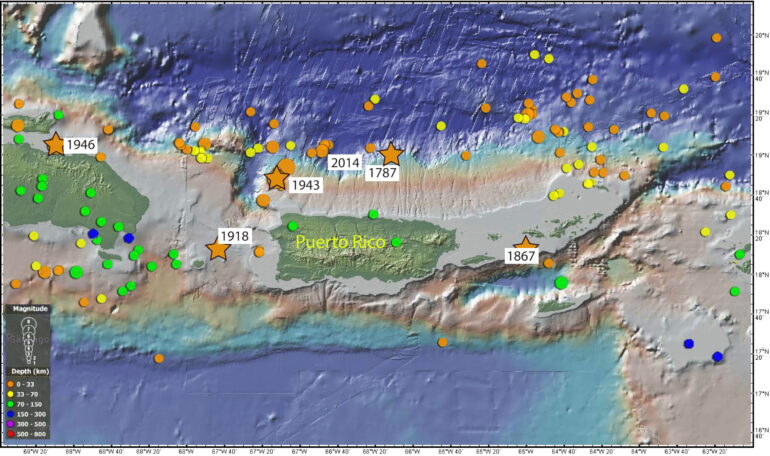 Seafloor video collected by a remotely operated vehicle off the coast of Puerto Rico indicates that an underwater landslide was not the cause of a devastating tsunami that hit the island’s west coast after a 1918 earthquake.

The proposed scar of the landslide is too old to be associated with the 1918 earthquake, based on new video analysis and carbon dating published in the Bulletin of the Seismological Society of America.

Uri ten Brink, a researcher at the U.S. Geological Survey, and colleagues instead propose another underwater source: rupture of a two-segment fault along the eastern wall of the Mona Rift, a seismically active zone between Puerto Rico and Hispaniola.

The analysis shows the need for more seafloor observations and sampling to evaluate future earthquake and tsunami risk in places like Puerto Rico, the authors write.

The 11 October 1918 magnitude 7.2 Puerto Rico or San Fermín earthquake triggered a tsunami on Puerto Rico’s west coast that injured or killed more than 100 people and caused more than $4 million (in 1918 U.S. dollars) worth of damage. A similar tsunami today would be devastating to the island’s much larger population and development, making it important to understand more about how the 1918 tsunami took place.

Researchers have debated the tsunami’s origins since the time of the earthquake, based in part on data (published also in BSSA) collected in 1919 by seismologists who visited Puerto Rico shortly after the event to interview eyewitnesses and inspect the damage. A 2008 seismic reflection study offshore indicated the presence of a large underwater landslide scar and broken submarine cables within the scar, leading some to conclude that this was the source of the tsunami.

The private nonprofit Ocean Exploration Trust offered ten Brink and colleagues the use of their ship the EV Nautilus and its seafloor remotely operated vehicle (ROV) Hercules to study seven sites around the Caribbean to better understand the region’s tectonics. Ocean Exploration Trust is led by Robert Ballard, an oceanographer and underwater archaeologist who has explored several famous ocean wreck sites, including the Titanic.

One of the seven sites explored by the researchers was “the landslide scar where we expected to observe fresh scars, big boulder fields, and other signs confirming our earlier interpretation, and documenting how large fresh limestone landslides look under water,” ten Brink explained. “Well, as sometimes happens in science, new evidence shows that we were wrong, and the slide scar is a lot older.”

When the researchers analyzed new high-definition video of the scar taken by the ROV, they found that the walls and floor of the scar were covered in a black iron-manganese patina that precipitates out of seawater and is found throughout the world’s oceans. It takes between 200 and 1000 years to build up a patina that is one-thousandth of a millimeter thick. The patina sample grabbed by the rover, however, was more than a millimeter thick, suggesting the scar was much older than the 1918 tsunami.

The ROV also collected sediments from the landslide floor. Carbon dating of those sediments confirmed that the scar is at least several hundred years old.

“It is definitely an earlier scar. How old? We don’t know,” ten Brink said. “We also don’t know whether it caused a tsunami. This will depend on whether the whole volume slid at once or in pieces and how fast it moved.”

When ten Brink and colleagues modeled an alternative source for the 1918 tsunami, they found that rupture of a two-segment fault on the Mona Rift was the best fit for the earthquake and tsunami observations.

Once again, new seafloor video offers some corroboration for the modeled source. This time, the researchers used the ROV Deep Discoverer, from the NOAA Ocean Exploration Program ship Okeanos Explorer, to collect the images. Their video analysis showed freshly exposed rock and slickenslides—smooth surfaces thought to be produced by frictional movement along a fault—that were not covered in the iron-manganese patina at the proposed source site.

The study is part of an upcoming BSSA special section on Caribbean tectonics, seismicity and earthquake hazards.

Provided by
Seismological Society of America