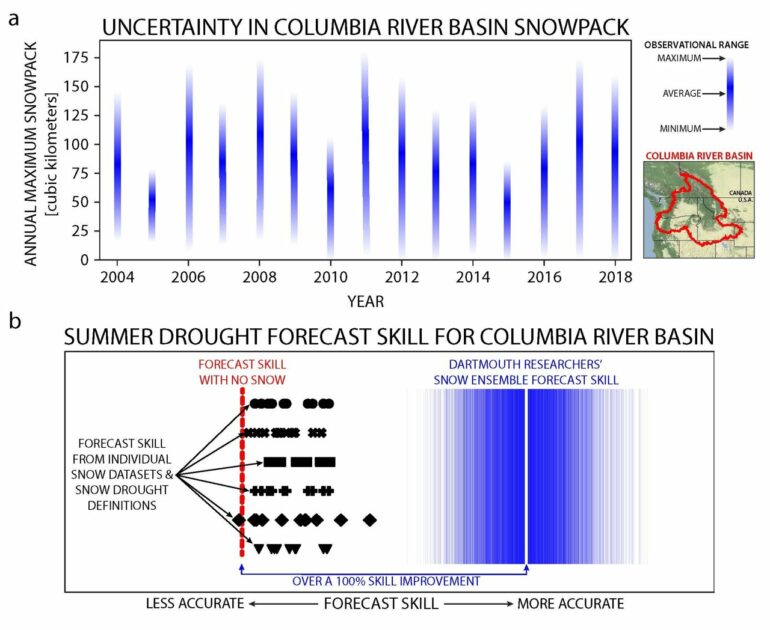 Periods of record low snow levels over the past decade have increased the urgency of snow research. As snow studies expand, usage of the term “snow drought” to describe seasons of abnormally low snowpack has become common. But disagreements still exist over how to measure snow depth and how to define snow drought.

Recognizing the link between snow and water security, a Dartmouth team compiled an unprecedented global-scale dataset of snowpack to show how uncertainties over determining snow depth and inconsistencies in classifying snow drought can actually be used to improve predictions of water availability.

The findings, published in the Bulletin of the American Meteorological Society, have implications for policymakers, emergency planners, water managers, business owners, and anyone who makes decisions based on the accessibility of water resources.

“Snow droughts will increase with global warming,” said Justin Mankin, assistant professor of geography and senior author of the study. “While one-off years of low snowpack may have felt like a less pressing issue in the past, the current shift to less snow every year forces us to evolve the research to understand the implications of snow droughts.”

Snow provides important ecological and economic services, including storing water for use in warm weather months. Diminished snowpack can mean lower reservoir levels or soil moisture, impacting households, businesses, the environment and economies. Combined with increasing heat in a changing climate, snow droughts may also lead to emergency conditions such as wildfire.

“We were interested in using the observed record of snow droughts to understand their consequences and inform preparations for a low snowpack future. What we found is that we don’t have a good observational basis for snow droughts, so we worked to fix that,” said Mankin.

The phrase “snow drought” was first used in academic literature in the early 1980s. References to the phrase, although without a precise definition, have increased steadily since about 2014.

One of the difficulties in assessing snow drought is measuring snow with certainty and consistency at a global scale. Researchers use a variety of methods to determine snowpack in an area, ranging from analyzing imprecise satellite data to collecting sparse, site-specific snow depth measurements.

Beyond this observational uncertainty, since there is no single definition of snow drought, there is no common way to identify the phenomenon or to describe its effects on water availability and other conditions.

“We don’t know what snowpack looks like in the real word with perfect certainty everywhere,” said Alexander Gottlieb, a Ph.D. candidate at Dartmouth and lead author of the study. “The difficulties of measuring and agreeing on snow levels has made it harder to precisely estimate the potential for summer drought, wildfire, and other low-water conditions.”

Until now, these differences have complicated snow drought studies and undermined preparations for low snowpack conditions expected with global warming. The Dartmouth team used the lack of conformity to design an approach that improves the understanding of snow drought, its causes and its consequences.

“We decided to treat uncertainty as a source of information that can be used to make better assessments of snow drought and their impacts,” said Gottlieb.

To see if snow drought and its impacts can be better understood by leveraging observational and definitional uncertainties, the team borrowed insights from the climate modeling community, which has best practices for analyzing the uncertainty in models about climate change.

By mapping multiple data sources against all known snow drought definitions, the team improved assessments of whether a snow drought occurred in a given place and year as well as how bad the drought was. The approach proved better than predictions based on only one definition or data source.

The team also demonstrated that it was possible to harness snow drought uncertainty to make better forecasts of snow drought impacts, like the likelihood of a drought happening in the summer after a low snow winter.

“Our approach is based on the belief that uncertainty is not necessarily a problem,” said Mankin. “Instead, uncertainty is something we have the tools to manage and better characterizations of what we don’t know for sure can actually help us make more robust claims about how the world works.”

While the study recognizes the importance of developing a common understanding of snow drought and its consequences for water availability and ecosystem well-being, the research suggests that regional approaches may end up being more useful than a consensus definition in many circumstances.

According to the study team, the possibility of a generalizable definition or assessment may become necessary at some point, particularly if snow drought declarations become linked to access to government resources.

“The impacts of snow drought will not be felt equally everywhere,” said Gottlieb. “When it comes down to it, agreeing on definitions is not pedantic, it’s an essential exercise with policy implications.”