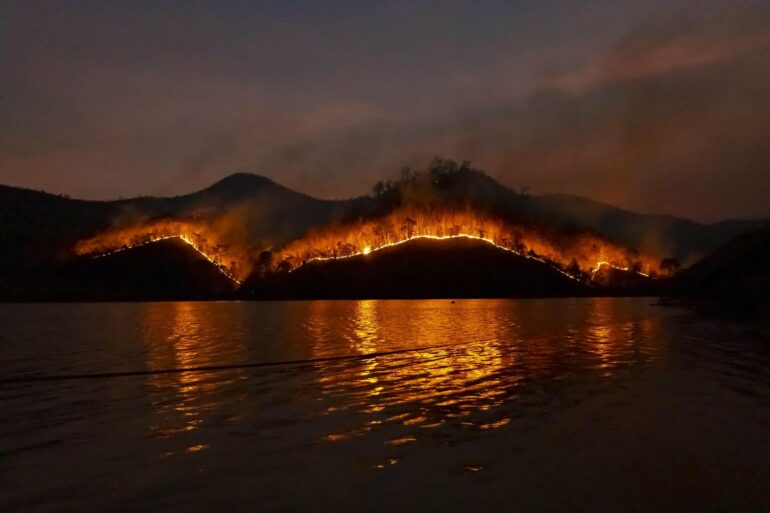 A new analysis led by researchers with the University of California has found the 2020 wildfires in the state, the most disastrous wildfire year on record, put twice as much greenhouse gas emissions into the Earth’s atmosphere as the total reduction in such pollutants in California between 2003–2019.

The research—”Up in smoke: California’s greenhouse gas reductions could be wiped out by 2020 wildfires”—is published in the October edition of the journal Environmental Pollution. Jerrett’s co-authors, who include researchers from UCLA and the University of Chicago, found California’s wildfire carbon dioxide equivalent, or CO2e, emissions from the 2020 blazes are approximately two times higher than California’s total greenhouse gas (GHG) emission reductions since 2003.

“To the great credit of California’s policy-makers and residents, from 2003 to 2019, California’s GHG emissions declined by 65 million metric tons of pollutants, a 13% drop that was largely driven by reductions from the electric power generation sector,” said Jerrett, who also serves as co-director of the UCLA Center for Healthy Climate Solutions (C-Solutions), a research center focused on protecting people and communities from the effects of climate change. “Essentially, the positive impact of all that hard work over almost two decades is at risk of being swept aside by the smoke produced in a single year of record-breaking wildfires.”

Over the long to very long term, regrowth of vegetation in burned areas could alleviate some of the emissions, but will not occur quickly enough to avert highly dangerous levels of increased pollutions, temperatures, and climate change, the researchers said.

“To put this into perspective, without considering future vegetation regrowth, emissions from the 2020 wildfires could be the second most important source of GHG emissions in the state of California; above either industry or electrical power generation,” said Dr. Miriam Marlier, a UCLA Fielding School professor and co-author. “It’s worth noting that many of the worst fire years in California’s history have occurred in the past 20 years, with eighteen of the top 20 most destructive fires—in terms of loss of life and property—since 2000, and five in 2020 alone.”

The researchers also examined the financial costs of the wildfire-derived air pollution; based on different criteria, the carbon emissions-only damages for California alone are approximately $98.7 million; for the United States, some $986.9 million; and globally, as much as $7 billion.

“These are estimates, of course, but they represent a currently unquantified aspect of damages due to fires that are incurred globally, in the U.S., and in California itself,” said Dr. Amir Jina, an assistant professor at the University of Chicago’s Harris School of Public Policy and a co-author of the research. “These damages should be counted in addition to fire control costs, damages to health from air pollution, and direct loss of life and property.”

“Although wildfires are a natural feature of many ecosystems in California, the increase in severe and frequent wildfire events has raised the possibility of transformed post-fire ecosystems,” Marlier said. “Even if long-term regrowth occurs, however, the carbon emissions occurring in the next 15–20 years will make it difficult to reach emission reduction targets needed to avert the increases in mean global temperature advocated by the Intergovernmental Panel on Climate Change, or IPCC.”

The challenges of understanding these very complex system, and finding policy options that can help find solutions, is at the core of the research, Jerrett said.

Future temperature growth in Asia is being overestimated by between 3.4% and 11.6%

“Wildfire emissions have not received nearly the same level of investment or attention as GHG emissions from other sectors,” he said. “Although wildfires are to some extent natural occurrences, human activity contributes to making wildfires ‘unnatural disasters’ through man-made climate change and development at the WUI in fire prone areas—and every Californian can understand the potential costs.”