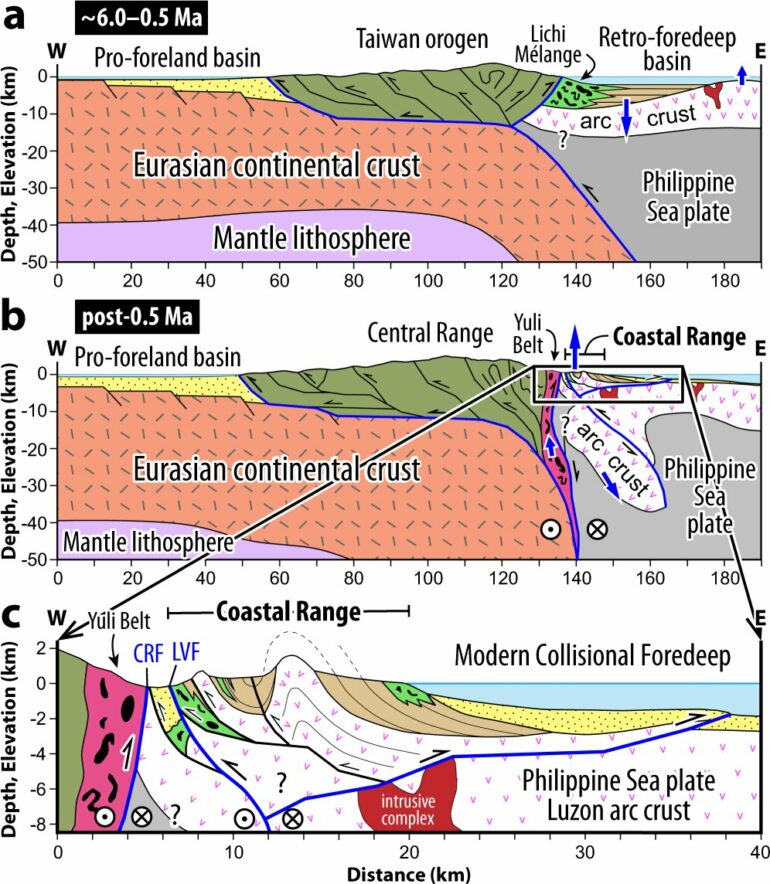 Some mountains can move in the blink of a geological eye.

A new study finds evidence of surprisingly rapid upward movement of earth’s crust on the island of Taiwan. Over roughly half a million years, the Coastal Range of east Taiwan was rising at a rate of 9 to 14 millimeters per year, the research shows.

While this seems imperceptibly slow by human standards, it’s quite fast for mountains. Much of the dramatic topography on the surface of the planet is formed by vertical movements of less than a millimeter per year.

“The earth’s surface can act extremely fast, way faster than most people imagine,” said Larry Syu-Heng Lai, a UO doctoral student who led the work alongside researchers at the UO and a team of collaborators in Taiwan.

“These measurements of extreme rates are unprecedented, and the records challenge ideas about the long timescales—several million years—needed for the rise and fall of a mountain,” Lai said.

The team published its results April 26 in the journal Communications Earth and Environment.

Taiwan sits at the boundary of two tectonic plates and formed over time from a series of collisions between the plates. Mountain-building happens there due to intense deformation and movement of the rocks near Earth’s surface.

Geologists have many ways to estimate the age of rocks and reconstruct their movement over time. But this rapid vertical crust movement in Taiwan had gone undetected by more traditional techniques.

Lai and his colleagues got a new look by analyzing sedimentary rocks from sites around Taiwan. These rocks record the history of sediment accumulation and erosion as the crust moves up and down. The researchers looked at tiny fossils embedded in those layers of rocks to figure out when they formed. They also looked at magnetic properties of the rocks, signatures left behind by flips in the direction of the earth’s magnetic pole over geologic history.

By combining all of those clues, they pieced together a new story. Taiwan is in a geological zone where volcanic islands from an oceanic plate are crushing together and merging into a continent.

The surface of the volcanic crust can bounce up and down dramatically, up to 10 kilometers of displacement, due to interactions between the plates. From that displacement, Lai and his team calculated the unexpectedly fast rate at which the mountains were rising.

Their discoveries also challenge a long-standing hypothesis for the geological origin story of Taiwan. Previously, geologists thought that Taiwan’s mountains emerged gradually along the boundary of the two plates, from north to south, over five to six million years.

“Our new idea says differently; the whole Coastal Range is popping up at the same time along the plate boundary, within half a million years,” Lai said. “We need to rethink about what was really happening during this mountain-building event and how to reconcile and reinterpret data from earlier research.”

The analysis techniques also could be used to understand how geological processes interact with processes like climate change and erosion to shape the landscape.

While the research focused on a specific part of Taiwan, dramatic movements like these also could have helped shape places like the Talkeetna-Chugach Mountains in Alaska and Klamath Mountains in Oregon.

“These kinds of crust motions are probably underdetected by previous studies,” Lai said.