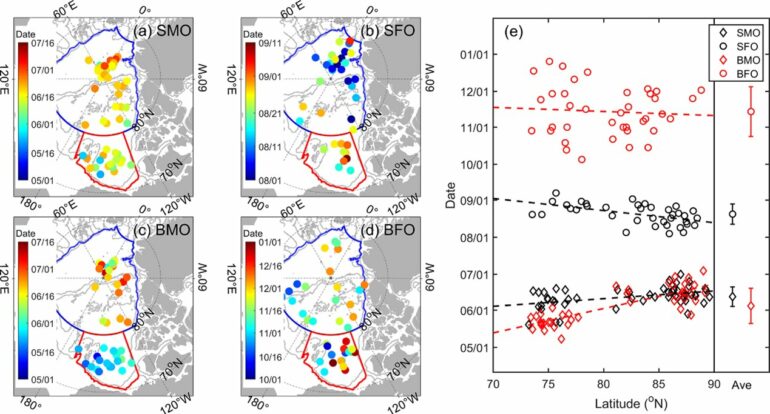 Years of research show that climate change signals are amplified in the Arctic, and that sea ice in this region is sensitive to increases in Arctic warming. Sea ice greatly modifies the exchanges of heat, momentum and mass between the atmosphere and the ocean. So, the timings of the sea ice melt and freeze onsets, as well as the length of the melt and freeze seasons, play a key role in the “heat budget” of the atmosphere-ice-ocean system.

Until now, most studies calculated the Arctic melt and freeze onsets using remote sensing observations from the surface, but rarely investigated the freeze-thaw process at ice bottom.

In a new study published today in the European Geosciences Union journal The Cryosphere, an international team of scientists synthesized multisource data from 2001 to 2018 to explore the spatiotemporal variations of both surface and basal melt/freeze onsets and uncover the mechanism behind them. These findings could improve our understanding of changes in the atmosphere–ice–ocean system and the mass balance of sea ice in a changing Arctic.

The researchers found that the overall average basal freeze onset of Arctic multiyear ice was almost 3 months later than the surface. “Based on synchronous ice and underlying ocean observations, we found the ice basal freeze-up delay relative to the surface, which can be attributed to the regulation of heat capacity of sea ice itself and the oceanic heat release from the ocean mixed layer and subsurface layer,” Lin says.

According to Lin, although thinner ice generally experiences a longer freezing season, the total ice growth still cannot offset the sea ice loss in summer. “From another point of view, the self-regulation of the Arctic sea ice-ocean system will delay the loss of Arctic sea ice.”

The research also found that the most significant temporal difference of melt onsets between surface and bottom occurred in the Beaufort Gyre region, where basal melt onsets showed more than a half month earlier than surface. Besides, both multiyear ice and first-year ice in this region exhibit a trend towards earlier basal melt onset, which can be attributed to the earlier warming of the surface ocean caused by thinning of sea ice thickness and increasing of sea ice mobility.

These results present the first complete picture of Arctic sea ice freeze-thaw cycle, and its coupling with atmosphere atop and ocean underlying. It also highlights the importance of synchronous comprehensive monitoring of air-ice-ocean system, which helps explain the physical nature of the coupling process.

The researchers call for more intensive and elaborative ice mass balance observations of diverse ice types and simultaneous upper ocean water properties observations in the future. This, they hope, will vastly improve our ability to fully understand the Arctic ice-ocean system.