The role of vegetation in reducing thermal stress in urban areas 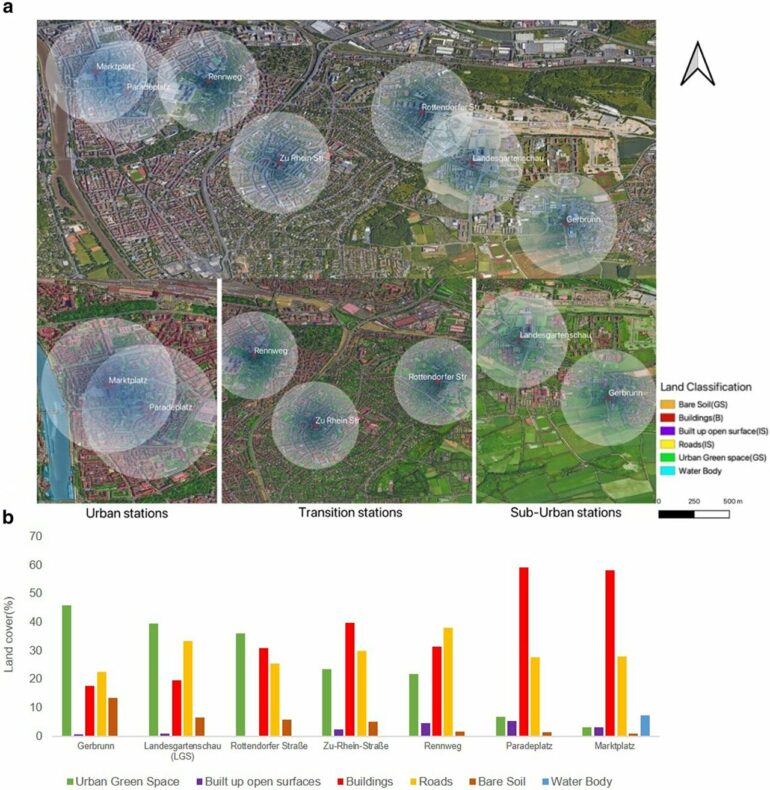 Scientists at the Technical University of Munich (TUM) conducted a multi-year empirical study to assess the impact of trees on city temperatures. Taking the city of Würzburg as an example, the researchers showed that vegetation cover of approximately 40 percent is needed to bring about lower summer temperatures.

Green infrastructure can help cities adapt to climate change by moderating the higher air temperatures, thus reducing the heat stress experienced by people. But the type of greenery plays an important role.

To understand the extent of urban heat islands and the relationship between daily and seasonal outdoor thermal stress, a research team headed by TUM conducted a three-year empirical study in the city of Würzburg.

The mean air temperature at inner-city sites was 1.3 degrees Celsius higher than at suburban locations during summer and 5 degrees Celsius higher during winter. “The differences were influenced by the characteristics of the prevailing land uses and especially by the number of buildings,” says Stephan Pauleit, a Professor of Strategic Landscape Management at TUM.

At one of the urban locations—”Marktplatz,” where there was no tree—a total of 97 hot days with air temperatures exceeding 30 degrees Celsius were counted over the three-year period of the study. On nine of those days, the wet bulb global temperature—an index for understanding thermal stress—exceeded the 35 degrees Celsius threshold which indicate extreme thermal stress. The wet bulb globe temperature (WBGT) is defined as the lowest temperature that can be reached under current ambient conditions by the evaporation of water only. It was calculated using meteorological data and other associated variables at seven stations starting from the city center, Marktplatz, to suburban site Gerbrunn. These values demonstrate the influence of the surrounding area, including site-specific characteristics such as buildings and greenspaces.

“Our study showed that extreme heat stress in summer could be halved with around 40 percent cover of greenspaces in the built environment, including grass lawns, green roofs and green walls with little compromise in increasing winter cold stress,” says Dr. Mohammad A. Rahman, a scientist at the Chair of Strategic Landscape Management at TUM.

A variety of greenspaces is important for the urban climate

In heterogeneous urban ecosystems, trees have multiple biophysical functions. First, with their extended canopies, trees reduce the input of shortwave radiation to the ground level by up to 90 percent, in particular during summer when deciduous trees are in leaf in temperate and cold climates. Second, trees cool their immediate vicinity by 1 to 8 degrees Celsius and increase the relative humidity of the air. This occurs through transpiration, i.e. the evaporation of water through the leaves during food production.

At the same time, trees can also bring negative effects such as hindering the vertical and horizontal mixing of air within narrow street canyons, preventing the polluted air at pedestrian level from being diluted and blown away by breezes. By contrast, grass cover reduces the radiative heat load through higher reflection as compared to the built environment. It also allows higher wind speeds to limit the summer heat load and greater solar radiation for reduced winter cold stress.

To avoid negative effects of climate change on human health, greenspaces must be planned strategically to ensure that they can also effectively reduce heat stresses in high-density urban areas.

The study is published in Scientific Reports.


Citation:
The role of vegetation in reducing thermal stress in urban areas (2022, May 20)