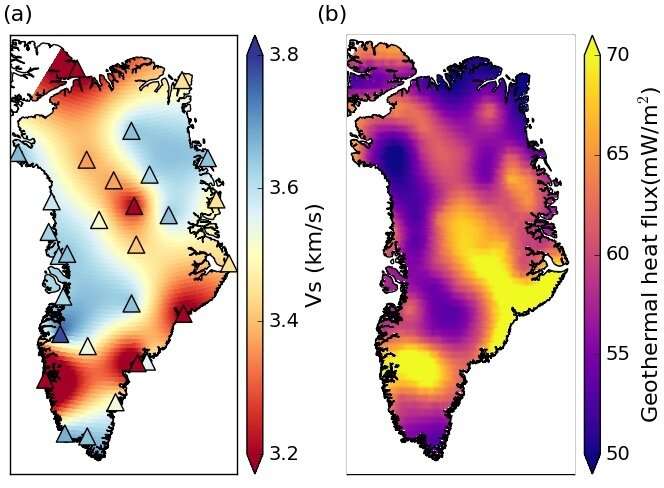 The noise created by the Earth’s movements has been used to build up a detailed picture of the geological conditions beneath the Greenland Ice Sheet and the impact on ice flow, described in new research led by Swansea University.

The team studied Rayleigh waves—seismic waves generated by movements such as earthquakes—to produce high-resolution images of the rocks underneath the ice sheet, helping to identify which areas are most susceptible to faster ice flow.

The Greenland Ice Sheet is the second largest reservoir of freshwater on Earth. However, the rate of loss of ice mass from the ice sheet has increased six-fold since 1991, which accounts for around 10% of the recent rise in global sea levels.

The geological conditions in the ground beneath an ice sheet or glacier play a key role in determining ice flow. Key factors include: The makeup of the layers of rock; the temperature of the earth’s crust beneath; and the amount of water present in liquid form between rock and ice as this acts as a lubricant, causing so-called “basal slip” and speeding up the flow of ice.

The problem, however, is how to assess what is happening deep underground, given the remoteness of Greenland and the fact that the ground is covered with ice approximately 2.5 kilometers thick.

In 2009, a permanent network of seismic monitoring stations was installed across Greenland, and they have been used in previous research. However, these studies have offered limited insight on the geological controls on the ice sheet.

This is where the new research comes in. The team was able to map out what is happening down as far as 5 kilometers by measuring Rayleigh waves extracted from the Earth’s noise. These seismic waves travel along the Earth’s surface and are sensitive to variations in Earth’s properties.

Rayleigh waves travel in an elliptical pattern and the specific feature that the researchers assessed was the horizontal to vertical ratio of particle motion within the waves.

Dr. Glenn Jones of Swansea University, who led the research as part of his Ser Cymru II Research Fellowship, said, “This research highlights the importance of the coupling between the solid earth and ice sheet dynamics. Interactions with the solid earth control the past, present and future dynamics of the Greenland Ice Sheet.

“Our technique using the elliptical shape of Rayleigh waves means we can build up a more detailed picture than before of the structure of the upper 5 km beneath the ice sheet.

“It will give us a better understanding of the processes that contribute to accelerated ice  discharge into the ocean and the consequent sea level rise.”


Citation:
Using the Earth’s noise to see beneath the Greenland ice sheet   (2021, December 15)