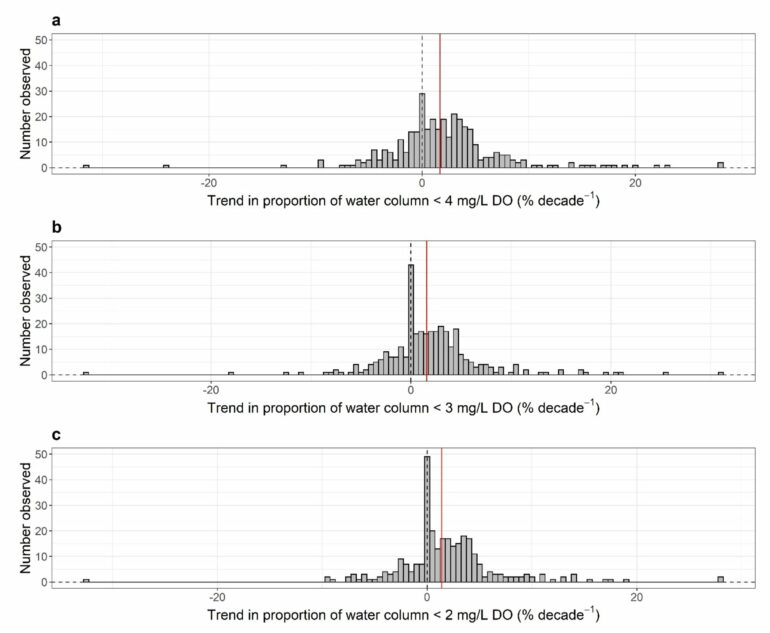 Rondaxe Lake in Herkimer County, New York, represents classic Adirondack Park waters. But over the last quarter-century, Rondaxe—like thousands of lakes in temperate zones around the world—has been losing a global-warming battle to maintain oxygen in its waters.

New research from Cornell University and Rensselaer Polytechnic Institute shows a continually warming world is leading to extended, late-summer weeks of water stratification, which prompts oxygen deprivation in the water—provoking conditions called hypoxia (low oxygen) and anoxia (no oxygen)—and negative consequences for fish and other species.

The work published Dec. 6 in the journal Global Change Biology.

“Lakes with dissolved oxygen losses strongly outnumber those with gains,” said lead author Stephen Jane, a postdoctoral fellow at the Cornell Atkinson Center for Sustainability. “At large scales, aerobic organisms are losing available habitat as warming of lakes continues. This is particularly the case for organisms that rely on well-oxygenated cool waters deep in lakes to survive warm periods.”

In temperate climate lakes, the researchers found that the amount of low oxygen water is increasing by 0.9% to 1.7% per decade on average and found that the volume of lake water lacking oxygen has increased by more than 50% from three decades ago.

Reducing oxygen in lake water can have many effects. For example, anoxic portions of the water column might see a buildup of methane—a powerful greenhouse gas. Nutrients such as phosphorus from agricultural fertilizer, released from unsettled lake sediment, may enter the water column, which increases the likelihood of harmful algal blooms.

In a typical July or August, a lake surface may be about 70 degrees, while the lake bottom may be around 40 degrees. “Water temperature and density are related,” Jane said. “So it becomes a situation where basically you have oil and vinegar, where strong water temperature differences between layers causes resistance to mixing—which is stratification.”

The result is that oxygen from the atmosphere is prevented from replenishing dissolved oxygen in deep waters, Jane said. Because winter ends sooner than it did decades ago, seasonal stratification is starting earlier and ending later.

These stratification changes lead to more time for deoxygenation—the interruption of the natural oxygenation process—for deep-water habitats, he said.