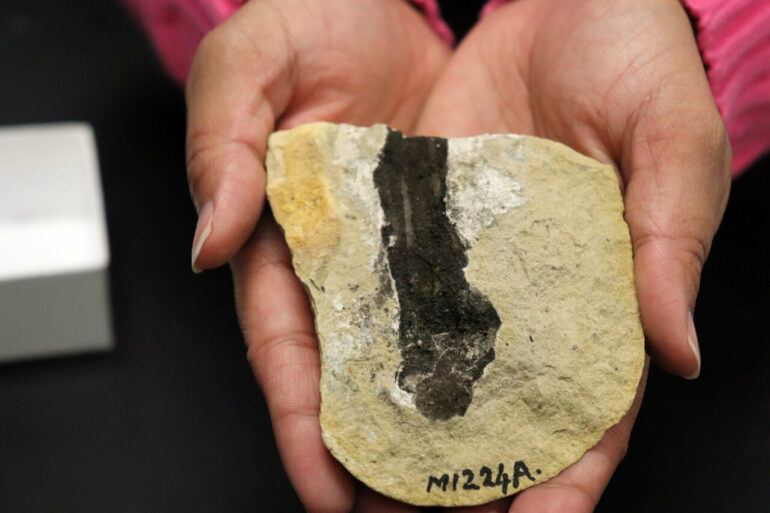 Climate change can affect life on Earth. According to new research, it can also affect the dead.

A study of exceptionally preserved fossils led by a graduate student at The University of Texas at Austin has found that rising global temperatures and a rapidly changing climate 183 million years ago may have created fossilization conditions in the world’s oceans that helped preserve the soft and delicate bodies of deceased marine animals.

The fossils include squid-like vampyropods with ink sacs, ornate crustacean claws, and fish with intact gills and eye tissue.

Despite being from different locations and marine environments, the fossils were all preserved in a similar manner. Geochemical analysis revealed that the conditions needed to preserve such captivating fossils could be connected to Earth’s climate.

“When I started the research, I had no idea if they would preserve the same way or a different way,” said lead author Sinjini Sinha, a graduate student at the UT Jackson School of Geosciences. “I was curious what led to the exceptional preservation.”

Going from dead organism to eternal fossil is a complex, chemical process that involves the formation of minerals within biological tissues. The authors examined different parts of fossil specimens under a scanning electron microscope equipped with a tool to detect chemical elements present in the minerals.

The fossils came from the Posidonia Shale in southern Germany, Strawberry Bank in southern England, and Ya Ha Tinda in Alberta, Canada. And in all of them, one element dominated: phosphorus.

“We expected there to be some similarities, but finding that they were so similar was a bit surprising,” said co-author Rowan Martindale, an associate professor at the Jackson School.

Phosphorus is common in bones, so finding it in fossilized fish skeletons wasn’t unusual. But when it appeared in tissues that don’t usually contain phosphorus, such as crustacean exoskeletons and vampyropod soft tissues, it signaled that the environment was the source of the phosphorus minerals.

“Phosphorus is an element that you don’t expect to see in sedimentary rocks,” he said. “It generally doesn’t get buried in large amounts except in unusual circumstances.”

The researchers think a period of extreme and rapid climate change caused by an influx of greenhouse gases into the atmosphere by volcanic eruptions during the Early Jurassic could be just that circumstance, with the rising temperatures causing increased rainfall that stripped large amounts of phosphorus-rich sediment from rocks on land into the world’s oceans.

Climate change today is also reducing oxygen in the oceans but it will be millions of years before anyone can say whether there is a boost in exceptional fossils, Martindale said.

How to avoid eating the world: From degrowth to a sustainable food system transformation

Javier Luque, a research associate at Harvard University who was not part of the study, said that the study is important because it suggests that past climate change could have helped enable fossilization in a variety of environments.

“Perhaps one of the biggest takeaways of this work is that global events in the past could have set the stage for the exceptional preservation seen in fossil-rich marine deposits around the world regardless of their location, lithologies, environments, and depositional setting,” he said.

The study was also co-authored by researchers at the University of Missouri, the Bath Royal Literary and Scientific Institution, and the Stuttgart State Museum of Natural History.


Citation:
Well-preserved fossils could be a consequence of past global climate change (2022, March 8)