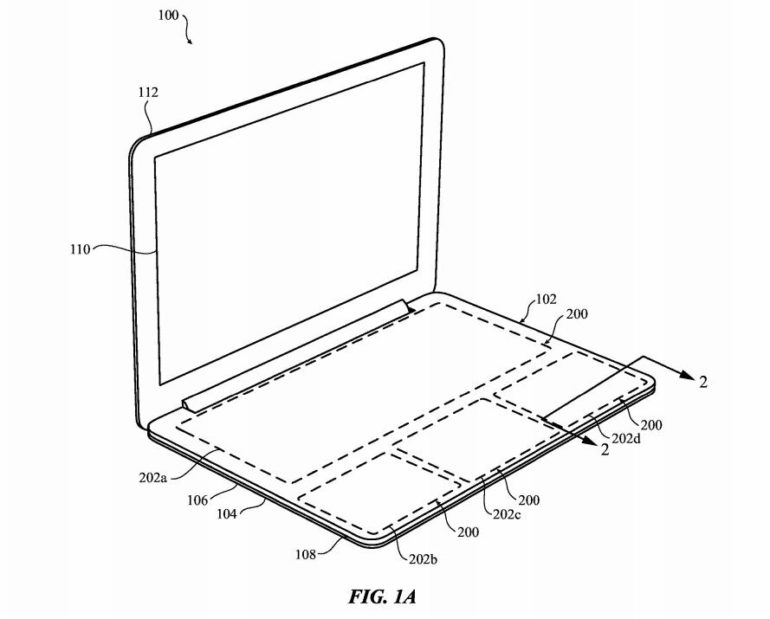 Apple’s MacBook team has announced the development of a force-sensitive input structure for electronic devices, recently approved by the United States Patent and Trademark Office.

This input structure begins with a metal contact layer on the outside, then continues with a sense layer, and finally finishing with drive layer at its core. Additionally, the structure might also come equipped with a compliant layer positioned between and attached to the sense and drive layers as well as a rigid base layer beneath the drive layer. Between the metal contact layer and rigid base layer, a set of supports might exist, as well.

Devices with this input structure would harbor a metal encasing connected to a contact layer which then attaches to a base layer below. This device includes a group of holes that makes up the contact layer above the input layer. Both of these aforementioned sections are partially flexible for pliancy purposes.

A primary purpose of such an intricate input device structure has to do with durability. Namely, as conventional input devices such as keyboards and laptops are often susceptible to damage by users accidentally spilling liquid and other contents, these new electronic devices and input sensors were designed to be more resistant to such incidents. Moreover, these new devices are also more capable of withstanding the shock of being dropped and other forms of high-impact exposure.

Finally, by manufacturing these devices and configurable input structures inside a metal casing, developers aim to protect all electronic components within a shield of sorts. This way, these devices can avoid the issue faced by typical input devices, wherein when one section undergoes damage, the entire device might become unusable.

Indeed, even when a user moves a device around with significant force or frequency, these input structures are capable of retaining their natural orientation as well as simultaneously detecting the user’s touch. This allows a user to go about their daily routine without worrying whether the device will operate efficiently. In fact, the force-sensitive input structure can even function across multiple types of devices, thus giving users a vast array of options when selecting devices equipped with this input structure.

For ease-of-use, the shape and size of these input devices can be altered and re-configured in order to adapt to a variety of hardware, firmware, software and other kinds of electronic device. On that front, developers have expressed possible intentions to incorporate such encased input structures into existing electronic devices, such as keyboards and mice.

Facebook customizes augmented reality to the flick of a wrist

Work from home amplifies Apple’s role in the enterprise