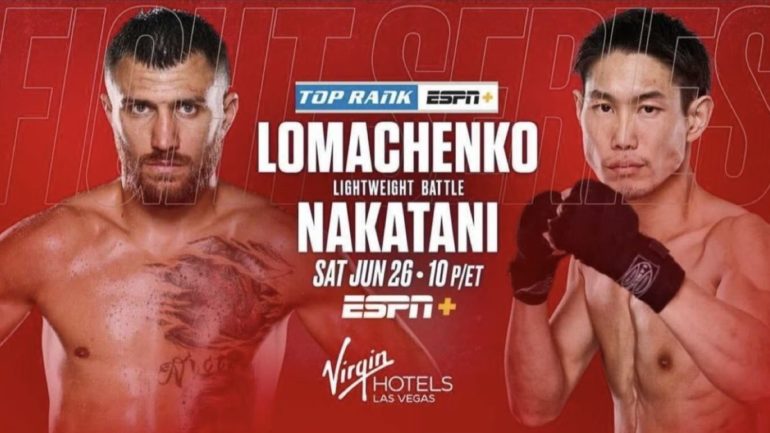 After last October’s shocker, Vasyl Lomachenko (14-2) begins his journey back to lightweight supremacy with a tough fight against the rangy Masayoshi Nakatani (19-1). Read on as we explain how to watch a Lomachenko vs Nakatani live stream today and catch all the boxing action online where it’s being shown exclusively in the US on ESPN Plus.

The loss of Loma’s WBA (Super), WBO, and The Ring lightweight titles at the hands of Teófimo López sent shockwaves through the sport, and unceremoniously dumps the Ukrainian great right back at square one.

Live stream: exclusively on ESPN Plus

Incredibly, this is just the second non-world title fight of Lomachenko’s career, the first being his professional debut in 2013. But he’s not planning to be belt-less for any amount of time, choosing Nakatani as his opponent specifically because of the Japanese fighter’s strong performance against López.

They went the distance two years ago, with the American winning via unanimous decision – as he did against Loma. It was the only defeat of Nakatani’s career, and though Lomachenko is by far the more storied of the two fighters, the scrapper from Osaka is taller by six inches and has the same reach advantage.

With so much riding on the fight for Lomachenko, this is going to be an intriguing spectacle. Follow our guide below to watch a Lomachenko vs Nakatani live stream online tonight.

How to watch Lomachenko vs Nakatani online tonight

If you’re in the US, ESPN has the rights to the Lomachenko vs Nakatani fight, with coverage of the event beginning at 7.15pm ET / 4.15pm PT, ahead of the main fight at 10pm ET / 7pm PT.

However, the fight won’t be available on any of ESPN’s linear channels. Lomachenko vs Nakatani will instead be shown on the sports network’s streaming service ESPN Plus.

ESPN+ only costs $5.99 per month and allows you to watch online as well as via its mobile app and TV streamer apps on the likes of Apple TV, Amazon Fire TV, Roku, PS4 and Xbox. You’ll save even more if you pay for a year in advance – that costs $59.99 for 12 months.

In AIApps and WebCompaniesSmartphones
on 20 November 20205 min read

But there’s even better value to be had, if you grab ESPN+ as part of the big Disney Plus Bundle. As well as ESPN Plus live coverage and documentary action, you’ll get access to the hugely impressive Disney Plus catalogue – which features Marvel movies, every Simpsons episode ever, the complete Star Wars canon, Pixar films, and much more – plus all the great shows and movies that Hulu offers.

And the cost is super reasonable – for all that content, you only have to pay $13.99 a month for the Disney Plus bundle.

Lomachenko vs Nakatani time and date