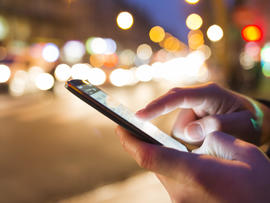 Some 58% of Brazilians only access the web through their phones, according to the TIC Domicílios study, carried out by the research arm of the Brazilian Internet Steering Committee. The research is one of the main indicators of the use of information and communication technologies among the Brazilian population and has been carried out since 2005.

The study considers Brazil’s current base of 164 million Internet users, the equivalent to 87% of the population above 10 years old. This includes 12 million users who do not have full Internet access, and only use mobile applications such as WhatsApp under zero-rating offers, whereby operators provide access to previously determined content and applications to the user, without incurring in extra cost.

Considering the country’s socioeconomic class system – which ranges from the elite (class A), the upper-middle class (class B), the lower middle class (class C), the working-class poor (class D) and the extremely poor and unemployed (class E) – the study noted that Brazilians from classes C, D and E don’t tend to have PCs at home and most use smartphones as their only means to carry out activities online.

The research also noted a stark difference in PC ownership according to socioeconomic status: while computers are present in almost 100% of elite households, PCs can be found in only 13% of homes within classes D and E. The study has also found there has been a boost in activities such as Internet-based courses within the lower middle class population, but Class C Brazilians study online way less than the elite.

According to the survey, there was an increase in uptake of digital channels for online public services in 2020, of about 40% in relation to the prior year, due to the restrictions of the the Covid-19 pandemic. Moreover, there has been a boost in usage of digital channels to perform financial transactions – 43% in 2020 versus 33% in 2029. However, this increase was driven primarily by users based in urban areas, with more education and belonging to the top of the socioeconomic pyramid.

Another study, also carried out by the Brazilian Internet Steering Committee, has found that more than 20 million households in the country, predominantly those within poorer segments of society, are digitally excluded. Separate research published earlier this year suggests that less than 20% of financially vulnerable Brazilians have been able to work remotely through the pandemic.