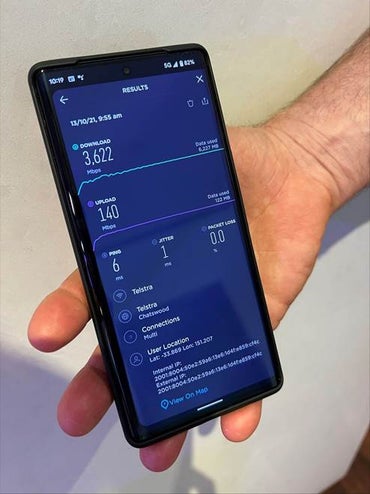 With the Google Pixel 6 Pro being one of the first big handsets capable of millimetre wave 5G connectivity, Australian telcos have gone a little gaga over mmWave.

Optus announced on Thursday morning that it would now be labelling its mmWave technology as Optus 5G Max.

“Well, 5G Max sits in a new league of its own. It’s where we shift from fast 5G speeds to the fastest 5G speeds.”

Williams said the telco has hit 4.5Gbps in a commercial environment, and over 5Gbps in its lab, and also referred to the network as Optu5G Max.

“The average Australian consumer today experiences network speeds in the range of 25-100Mbps via 4G mobile or NBN. With 5G Max we could be looking at speeds 40-80 times faster,” Williams added.

What is the metaverse? 2 media and information experts explain

Telstra has 65 sites using mmWave around the country and is looking to triple that number before the end of 2021.

Current sites include the Opera House, QVB, and Darling Harbour in Sydney; the MCG and Flinders Lane in Melbourne; and Fortitude Valley in Brisbane.

Following publication, Optus fired back with an even realer world speed test of its own conducted in Melbourne. In this test, the Pixel 6 Pro was able to pull almost 3.75Gbps. Running the speed test consumed 6.2GB of data, and the upload speed only managed 113Mbps.