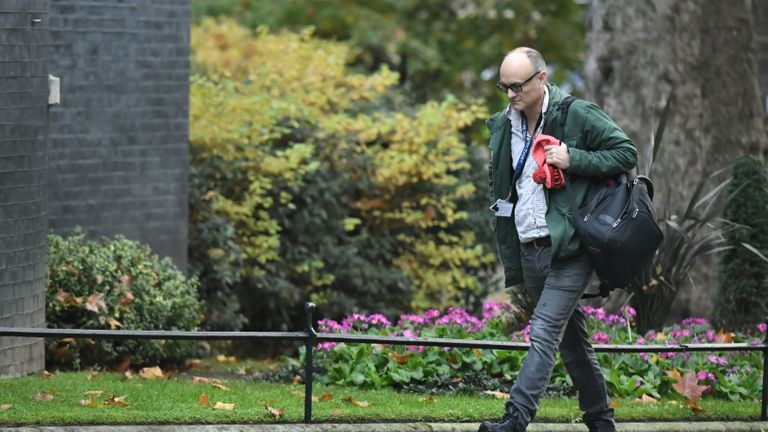 The UK’s vaccine tsar is to pay almost £700,000 in taxpayers’ money on a team of boutique PR consultants whose secretary is a long-time business associate of Dominic Cummings’ father-in-law.

Over the weekend, it was reported that Kate Bingham, the head of the vaccine taskforce, who reports directly to the prime minister, was to spend more than £670,000 hiring PR consultants from a firm called Admiral Associates.

The owner and founding managing director of Admiral Associates is listed in companies house as Georgie Cameron, whose husband Angus Collingwood-Cameron is also listed as secretary. He is also a park manager for Chillingham Castle Wild Cattle Association, and a director since 2004 along with Humphry Wakefield, father-in-law of Cummings.

Eight of Cameron’s freelance consultants are overseeing Bingham’s media strategy. There has been growing disquiet after it was claimed Bingham disclosed confidential data about government investment priorities to US financiers before it emerged that she could personally profit from the launch of an investment fund bankrolled by UK taxpayers.

Appearing before a joint select committee hearing last week, Bingham denied any wrongdoing and described the report as “nonsense”, “inaccurate” and “irresponsible”.

On its LinkedIn page, in the only post during the last five months, Admiral Associates appeared to announce it was hiring for the roles to support the UK pandemic response and that they required people skilled in crisis communications.

It said experience of working with or within a healthcare or research setting and/or a government department was an advantage and that remuneration would be “excellent for the right candidates”.

The overarching company last year reported tangible assets of £2,884 and total equity of £194,065. The company filing said: “The director of the company has elected not to include a copy of the profit and loss account within the financial statements.”

The association between Wakefield and the PR company is likely to reignite accusations of a so-called “chumocracy” at the centre of British politics after a number of contracts amid the coronavirus crisis were awarded to allies of the prime minister’s chief of staff without tender.

Rachel Reeves, the shadow Cabinet Office minister, said: “These revelations raise yet more serious questions about how taxpayer money is being spent during the pandemic and how government is being run.

“The public deserve urgent answers as to how a small PR agency with close links to the PM’s closest adviser was simply gifted such a large contract – and what exactly was delivered for such a price tag.

“We know Dominic Cummings doesn’t think the rules apply to him, but this is no way to treat taxpayer money. The prime minister must be transparent about the processes he has put in place to allow such potential breaches of public trust.”

According to the Sunday Times, £500,000 has already been spent on the team, which is contracted until the end of the year, suggesting each consultant is on the equivalent of £167,000 a year. There was not been an open procurement process but this is not unusual practice in some circumstances.

Bingham, who is married to the Conservative minister Jesse Norman, is herself in a temporary role and had always been expected to step down later this year. The role was not advertised and it has been reported she may have been headhunted by Johnson, from whom she won praise for her work on procuring coronavirus vaccines.

It was reported those assisting Bingham, who reports directly to the PM, are helping her prepare for media appearances, drafting statements and overseeing a vaccines podcast on Spotify, which has broadcast eight episodes since August.

The preamble for one episode reads: “Developing a vaccine is one thing, but manufacturing it in very large amounts is a significant challenge in itself.” Another episode discusses how to reassure people who may be reluctant to take a vaccine.

The apparent PR push comes as the health secretary, Matt Hancock, said on Tuesday he had asked the NHS to get ready for a rollout of the vaccine as soon as next month.

The Collingwood-Camerons and Admiral Associates did not return requests for comment. A No 10 spokesperson said: “It is ridiculous to make such an imaginary and tenuous link. Dominic Cummings has never heard of Georgina or Angus Cameron.

“Specialist communications support was procured by the Vaccine Taskforce in line with proper practice.”