The effects of too much screen time on children 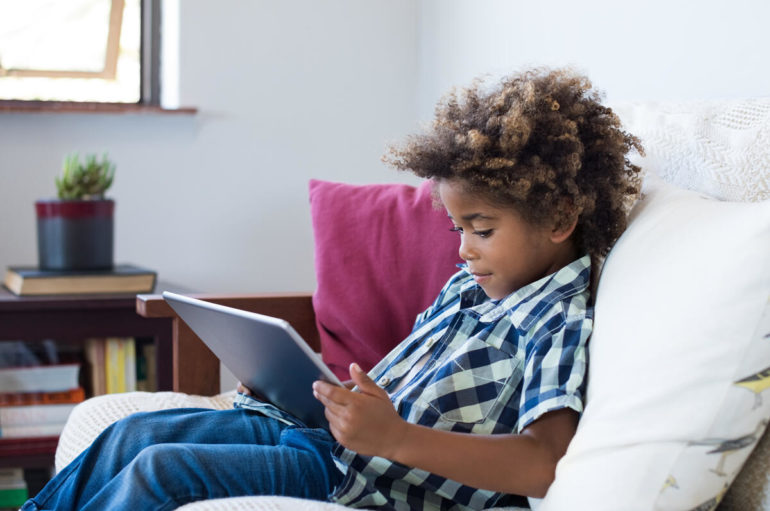 Children and screen time: An overview

Exposure to media is everywhere, and it’s all vying for your children’s attention. We’re only starting to realize the effects of screen time on children and families, and so far the results are not entirely positive. Screen time is the amount of time spent on devices like TV, video games, and phones. Concerns regarding screen time have been around for a while as studies have shown too much screen time risks children’s mental health and can cause conflict within a family. But how much screen time is too much? There is a lot to consider as there can be educational benefits to children using electronics as well.

How much is too much screen time?

According to the American Academy of Pediatrics (AAP), children spend an average of seven hours a day using their screens. However, screen time isn’t just limited to TV. With the age of the internet, parents now navigate having their children exposed to social media platforms, video games, and a myriad of devices like tablets, phones, and computers. The following are screen time recommendations from the AAP:

Ages 2 and under: Do not allow any screen time for children under 24 months old. Video-chatting or playing with your children on apps after they turn 6 months old can be beneficial for the child; however, the World Health Organization (WHO) recommends that children under 24 months old not be exposed to screen time at all.Ages 2–5: For children ages 2 to 5, you should not allow them to have more than an hour of screen time a day.Ages 6 and older: Manage your children’s screen time to what you feel is appropriate. Make sure that the guidelines you put in place does not negatively impact their physical activity or sleep.

Experts recommend that you start the conversation around media use early and consider developing a family media plan to designate when, where, and for how long your children can have screen time.

What are the effects of too much screen time on children?

The negative effects of too much screen time

According to a study conducted between San Diego State University and the University of Georgia, experts found that typically after one hour of screen time per day, the more time children spent on their electronics, the more their psychological health was negatively impacted.

Adolescents had the highest amount of screen time, usually more than seven hours a day. Children who were attached to their electronic devices for long periods of time tended to struggle much more with their mental health than children who only had screen times of an hour or less a day. These high-frequency users were twice as likely to develop anxiety and/or depression and more likely to display poor emotional regulation, argue more, and be unable to finish tasks.

Children whose screen time was curbed to an hour or less a day, however, had much better mental health, self-control, and demonstrated much more curiosity.

Retailers Screwed Everyone on PlayStation 5 Preorders

The positive effects of screen time

While there can be many negative effects of screen time if it isn’t monitored, there can also be some positive benefits as well. According to the official journal of the AAP, using video-chatting with children under 2 years old can help create a social connection with relatives who don’t live nearby. Evidence shows that infants and toddlers are able to engage in video chats, but need their parents to facilitate the connection. Educational apps, TV shows, websites, and games can also help children to learn about various subjects. For example, “Sesame Street” is credited for helping improve children’s social skills, literacy, and cognitive abilities.

How can you reduce your child’s screen time?

Be an example: As the saying goes, “Be the change you want to see in the world.” If you want your children to limit their screen time, show them the benefits by being an example and curbing your own time on electronics. Turn your phone on silent during family dinners and/or limit your screen time before bed. This way, both you and your children can experience the benefits of less screen time.Come up with a plan: Organizations like the AAP offer resources to construct and manage your family’s media plan. Simply input the names and age ranges for your children, and pick which guidelines feel best for you and your family. Use screen time as a reward: If your child finishes a book or plays outside for an hour, offer them screen time as a reward for their healthy decisions.Set a curfew: Pick a time of day when certain devices and internet, or even all screen time, is off limits. This can help keep your children focused on other activities as well as help improve their sleep.