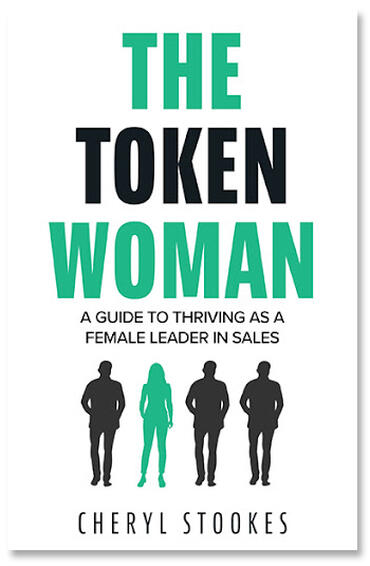 “I looked around the room wondering when the token woman was going to show up. Then I realized… she was me.”

Sales, particularly in the technology industry, is still usually male dominated. Having worked her way up from IT phone sales rep to vice president, Cheryl Stookes has plenty of experience of being the token woman — and, in The Token Woman: A Guide to Thriving as a Female Leader in Sales, some advice for others going through the same thing.

Many women will recognise the feeling of being an underqualified imposter, will receive feedback about how to present themselves, will wonder how to handle tough situations like needing to fire someone, and will want to speak up about leaders who belittle colleagues taking parental leave. But this fast 78-page read is just as likely to be helpful to male readers, because most of the advice isn’t specific to women.

If The Token Woman has a flaw, it’s how understated it is about discrimination, the difficulties facing those hired to improve diversity without equal efforts being made to change company culture, or the strain of coping with mansplaining and ‘manstealing’. The latter is Stookes’s apposite term for a man dismissing a woman’s suggestion in a meeting, only to present it as their own idea a few minutes later, taking the credit when everyone likes it.

Instead, in much the same way that the book title puts a positive spin on a frequently negative experience, Stookes concentrates on remaining cheerful and offering practical suggestions for leaders and colleagues, illustrated with anecdotes from her own career.

Women who have repeatedly encountered mansplaining without the benefit of a supportive (male) manager backing them wholeheartedly to tell the offender what they’re doing wrong may be a little envious. But simply hearing how common difficult situations are will help readers with similar challenges feel less isolated. There’s advice for dealing with these challenges, as well as for stepping up as a manager, all of which is applicable widely beyond sales (or indeed, the technology industry).

Replying to manstealers as if they were championing the idea of the person who originally suggested it isn’t just a subtle way of restoring credit to its rightful owner; it can also help create a culture where everyone acknowledges and credits contributions. “If something takes more than three emails to get resolved, it’s time to pick up the phone” is a useful reminder of an obvious course of action that’s easy to forget.

The five levels of problem solving (from not knowing either the problem or the solution, to reporting back on which solution best solved a problem) will be extremely helpful, both for inexperienced managers and for those who haven’t had a manager coach them with this kind of advice. There are even tips for managing upward hidden in Stookes’s suggestions for how a manager can prepare for a customer meeting that a more junior employee asks them to join. And while it’s increasingly common to suggest that improvisational comedy is useful preparation for work, it’s nice to have that cover more than the ‘yes, and’ principle.

All the useful advice does assume that the reader will be able to speak up without serious consequences. Stookes acknowledges that, as a white woman, there is discrimination she hasn’t faced, and she’s clear about the value of diversity and the need to call out bad behaviour and provide support.

While the light, friendly and often funny tone of the book fits the focus on helpful tips rather than the frustrating experiences that make the tips necessary, not everyone will be able to maintain their ‘resting bitch face’ without it being career limiting. But if you are in a position to put Stookes’s advice into action, you’ll find this a refreshing take on how to handle some common workplace irritations.

For less than $10, anyone can now get up close and explore single cells in VR

In Apps and WebCompaniesSmartphones
on 28 October 202110 min read