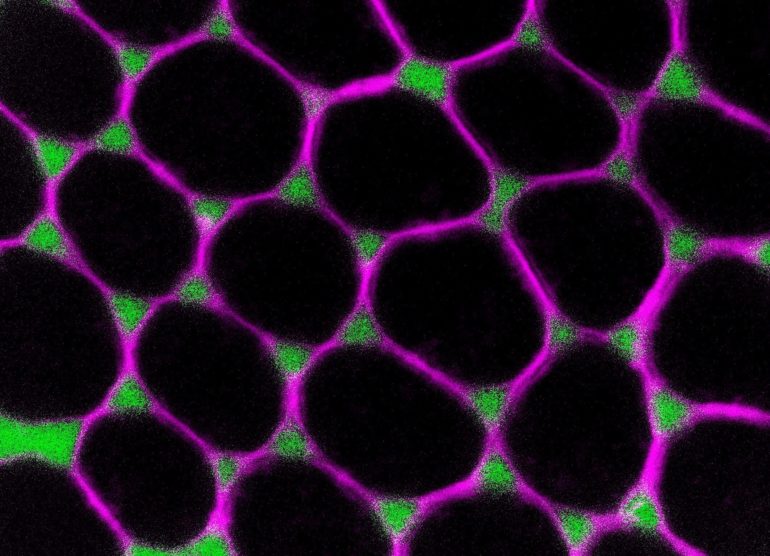 Within multicellular organisms, cells build connections with each other forming cell layers that cover the surfaces of tissues and organs and separate structures in the body. For example, the skin forms a mantle around the entire organism, and the layer of cells lining the blood vessels creates a boundary between the bloodstream and tissues.

Special connections between neighboring cells ensure that these cellular barriers are, on the one hand, stable and tight—thus protecting the body and organs against pathogens—while, on the other hand, they remain permeable to specific substances or migrating cells. This is how the cells allow dissolved nutrients to be transported into organs, and how cells of the immune system are able to migrate from the blood across the blood vessel wall into inflamed tissue.

Scientists at the University of Münster have now investigated a comparable process in the ovary of the fruit fly (Drosophila melanogaster). Here, the maturing egg cells are enclosed by a layer of epithelial cells through which the egg absorbs yolk-forming proteins. The researchers found that, at the points where three cells meet, the epithelial cells loosen their connections in a controlled manner and the yolk proteins are transported to the egg cell through the resulting gaps.

At places where only two cells connect, the connections are maintained, thus keeping the tissue integrity intact. “Our findings contribute to a better understanding of how cellular barriers function and are restructured during development, which provides a basis for deciphering the mechanisms of certain pathological processes,” explains Prof Dr. Stefan Luschnig, a developmental biologist and leader of the research project. The study has now been published in the scientific journal “Developmental Cell“.

Investigations during egg development in the fruit fly

Whenever substances are transported through a cell layer, the cells either take them up through the membrane on one side of the cell layer and then release them on the other side—which requires a lot of energy—or the substances diffuse through gaps between the cells. From studies of other insects, it was already known that yolk proteins are usually transported into egg cells via spaces between the epithelial cells that enclose the eggs. The new investigation confirmed that this is also the case for the fruit fly. However, it was not previously clear how the cells manage to transiently open up intercellular spaces while at the same time keeping the tissue intact.

To visualize these cellular processes live and analyze the molecular mechanisms behind them, the scientists genetically labeled certain proteins of the fruit fly with fluorescent molecules, kept the ovaries in tissue cultures, and examined the living tissue using confocal laser scanning microscopy. They focused their attention on the proteins on the surface of the epithelial cells. These so-called adhesion proteins mechanically hold the cellular network together and seal the spaces between cells.

The scientists found that the epithelial cells sequentially removed four different adhesion proteins from their membranes. “This process takes several hours, and only when the last protein is gone do the cell junctions open,” explains biologist Jone Isasti-Sanchez, who is the first author of the study and a doctoral candidate in the Integrated Research Training Group within the Collaborative Research Center 1348 “Dynamic Cellular Interfaces” at the University of Münster. After the junctions have opened, the uptake of yolk proteins into the egg proceeds over about 16 hours and, subsequently, the process reverses—the intercellular spaces close again.

The researchers demonstrated that the cells open their contact sites by taking up adhesion proteins from the surface into the cell interior, using a basic cellular process called endocytosis. An important new finding is that endocytosis seems to take place to a greater extent at those points where three cells meet, and, as a result, the cell junctions only open up at these points. Where only two cells meet, the contact is maintained. “The fact that this process occurs selectively at the three-cell contact-points and, moreover, in such an orderly fashion, is probably important for preventing the tissue from falling apart,” says Stefan Luschnig. In addition, he adds that the process presumably has to take place in a very controlled manner because the opening of gates in a tissue comes with the risk that pathogens will enter.

In their experiments, the scientists also genetically increased or reduced the amount of the adhesion protein E-cadherin and were able to show that the amount of this protein determines how wide the intercellular spaces open. In addition, they found that the mechanical tension in the cytoskeleton plays a key role in the process. This tension is generated by a structure consisting of the proteins actin and myosin, which encircles the cell periphery and is able to contract, similar to a rubber band. When the researchers increased the activity of myosin in the cell, the cytoskeleton contracted more, which prevented the cell junctions from opening.

Humans Have The Biological Toolkit to Have Venomous Saliva, Study Finds

Decoded: The structure of the barrier between three cells

Provided by
University of Münster


Citation:
Junctions between three cells serve as gateways for the transport of substances (2021, April 7)
retrieved 7 April 2021
from https://phys.org/news/2021-04-junctions-cells-gateways-substances.html