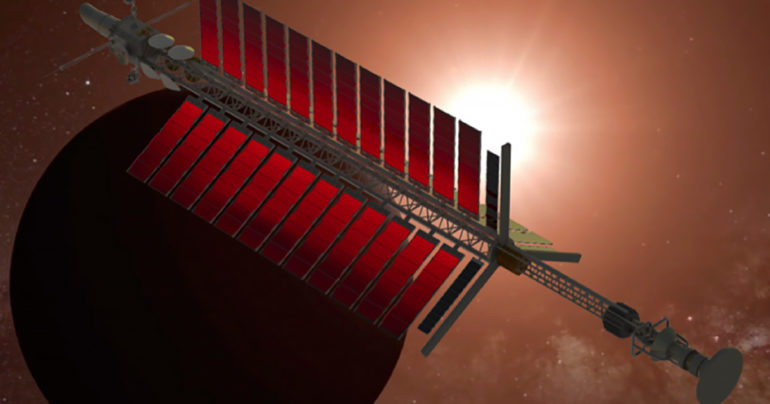 His invention, dubbed  the Mach-effect gravitational assist (MEGA) drive, makes the extraordinary promise of a propulsion system that relies on nothing but a source of electricity — no heavy combustion fuel necessary, as Wired reports in a fascinating new feature.

The idea is to accelerate slowly, but over a very long period of time. According to Woodward, a spacecraft with a MEGA drive could eventually reach velocities approaching the speed of light, with the help of an onboard nuclear reactor to supply decades worth of electric power.

The MEGA drive relies on Mach’s principle, named by Albert Einstein himself, which claims that inertia is related to distant gravitational effects. As an object’s energy changes, the very matter of space and time changes around it as well, a controversial an interpretation of Einstein’s famous mass-energy equivalence principle E=mc².

In other words, according to Wired, if part of an object — in the case of the MEGA drive, parts of tiny piezoelectric disks — were to simultaneously change its mass and energy state, it could theoretically start accelerating.

Woodward’s work on his MEGA drive has been ongoing for over thirty years. He was even awarded funding through NASA’s Innovative Advanced Concepts program in 2017.

With the grant money, Woodward and his collaborators have even designed a conceptual uncrewed spacecraft called SSI Lambda, an unusual-looking craft that houses an array of about 1,5000 scaled-up MEGA drives.

“I was shocked at the huge increase in measured force,” Hal Fearn, close collaborator and physicist at California State University, Fullerton, told Wired.

Yet other researchers are still skeptical of the novel device.

“I’d say there’s between a 1-in-10 and 1-in-10,000,000 chance that it’s real, and probably toward the higher end of that spectrum,” Mike McDonald, an aerospace engineer at the Naval Research Laboratory in Maryland, told the magazine.

Woodward and Fearn are now planning to send a demonstration of the device into orbit to test how it fares in space.

More on interstellar travel: New Experiment Will Test EmDrive That Breaks the Laws of Physics