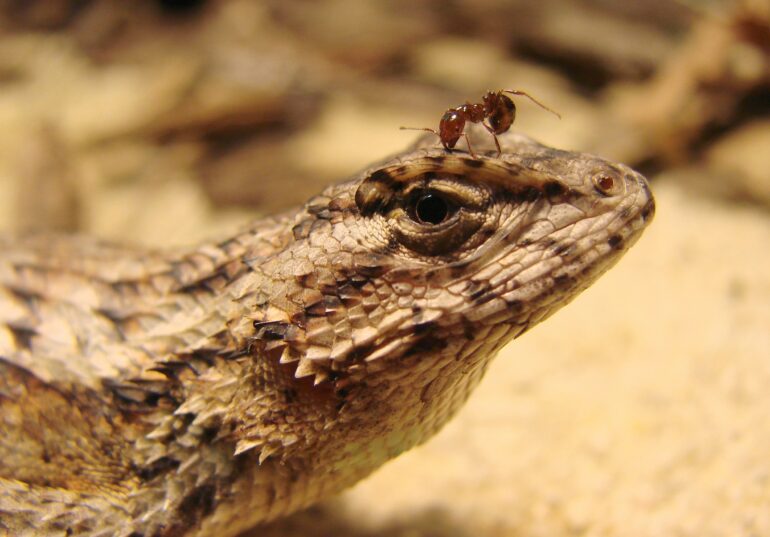 An eastern fence lizard basking in the sun feels a small red ant walk over its back. Not hungry, it ignores the insect. Soon there are lots of ants crawling up its legs, biting the scales that usually protect it and inserting their stingers in its soft underlying flesh.

Not having evolved with this threat, the lizard adopts its typical defensive posture of lying flat and closing its eyes, counting on its natural camouflage to protect it. This can be a deadly decision, though. As few as 12 of these ants can kill an adult lizard in less than a minute.

Such interactions are now common in the southeastern United States, where native animals such as eastern fence lizards (Sceloporus undulatus) have shared their habitat with the invasive red imported fire ant (Solenopsis invicta) for decades.

Our research group has been studying the interactions between these two species and how they change over time. These small lizards, about 6 inches (15 centimeters) from nose to the tip of the tail, have been native to the southeastern United States for thousands of years. Invasive red imported fire ants are originally from South America but were unintentionally introduced to the port of Mobile, Alabama, in the 1930s and have steadily spread northward – into the lizards’ territory – since their introduction.

We’re particularly interested in how animals may adapt to coexist with venomous species. The fire ants’ well-documented path of invasion, and the fact that they are currently restricted to just a portion of the lizards’ range, allows us to compare how lizards from ecologically similar areas differ based on the presence or absence of these fire ants. Overall it seems the lizards are learning to live with the invaders, adapting their behavior and bodies to better survive attacks from the ants and using them as a new food source.

Lizards and fire ants require a similar habitat to survive – open and often disturbed patches of land that let in sunlight. We’ve found that lizards don’t avoid areas where fire ants are and they don’t avoid their scent. It would be difficult to do, anyway, given how ubiquitous these ants are – within the areas they’ve invaded, fire ant mounds can dot the landscape every few meters.

Foraging fire ants can locate a basking lizard within minutes and quickly recruit other ants to attack. All is not lost for the lizard, however. Some do what you probably would when attacked by fire ants: flick them off and move away. This twitch-and-flee behavior removes scout ants, preventing them from recruiting reinforcements, and also gets rid of any other ant attackers.

This behavior is common in baby fence lizards, which are vulnerable even to native ants, but is usually lost in adults as they outgrow threats from native ants by getting…