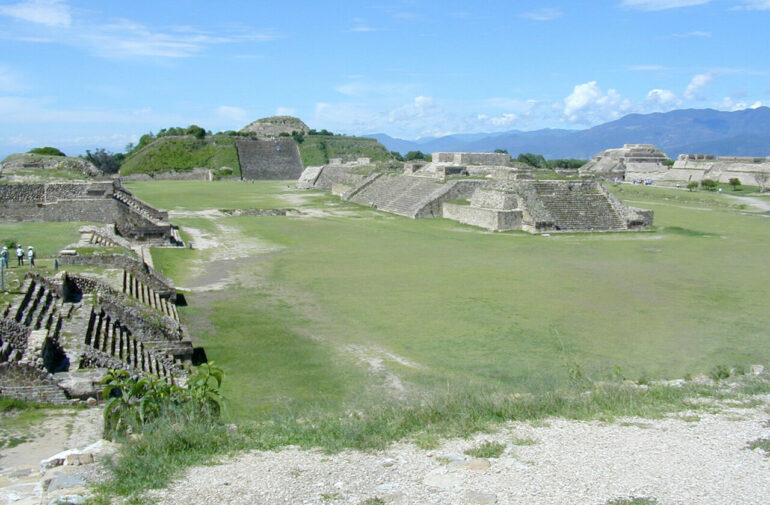 Location, location, location—it’s the first rule of real estate. For a long time, it’s been widely assumed that being close to resources drives settlement patterns, with cities generally founded near water and fertile land for growing crops. But a new paper by a husband-and-wife archaeological team questions that idea, using the example of an ancient city in what’s now southern Mexico. The researchers argue that Monte Albán, the largest city in its region for more than a thousand years, wasn’t situated near especially good farmland. But what it did have from the city’s foundation was a defendable hilltop location and a more collective form of government that attracted people both to the settlement and its surrounding area.

“We wanted to understand why Monte Albán was founded where it was,” says Linda Nicholas, the first author of the study in Frontiers in Political Science and an adjunct curator at the Field Museum.

Monte Albán lies in the Valley of Oaxaca in southern Mexico. It was founded in 500 BC, grew rapidly, and endured as the region’s main metropolis for 1,300 years, longer than most, if not all, other prehispanic Mesoamerican cities. “We’ve been working in the Oaxaca Valley for 40 years, and we and our colleagues have wondered what drew so many people to move to Monte Albán and its surrounding area, and what allowed the city to sustain itself for so long,” says Gary Feinman, the Field Museum’s MacArthur curator of anthropology and co-author of the study. “Over the years, a few competing ideas have been advanced.”

One hypothesis to explain the rapid growth at Monte Albán is coercion—the idea that powerful rulers forced people move there. Another possible explanation was that people went there because the land was good for farming. To examine the validity of these possible explanations, Nicholas and Feinman went back over decades of research covering both Monte Albán and the surrounding Valley of Oaxaca.

To evaluate the argument that Monte Albán attracted people because of the quality of its farmland, the researchers drew on studies of modern land use in the valley to map out different land classes based on the availability and permanence of water, the most important factor for crop yields in the valley. Good, well-watered land was patchily distributed across the valley, so that some areas had much higher potential yields than others. While pre-Monte Albán settlements were more heavily concentrated in the most productive parts of the valley, Monte Albán was not. Land quality was less a factor in settlement decisions at the time of Monte Albán’s foundation, both for the city and nearby settlements.

“Linda’s analysis of land use shows very clearly that Monte Albán wasn’t located near the richest land. Whether you just look at the land itself, or whether you figure in the labor to work it, agrarian productivity cannot explain the location of Monte Albán,” says Feinman.

So the hypothesis about fertile land doesn’t hold up for Monte Albán. Feinman and Nicholas also investigated the possibility that people were forced to come to the region. This part of the project relied on decades of archaeological survey work.

“In the 1960s, archaeologists started to ask different questions about ancient societies beyond just collecting and categorizing artifacts,” says Nicholas. “When you excavate a site, you only get a picture of a very small part, and also it’s both destructive and expensive.”

“If you’re trying to answer questions about how early cities formed and how long they lasted, excavation with its limited portal into the past doesn’t answer them,” says Feinman. “If you want to learn about the city of Chicago, excavating one house, a block, or even one neighborhood wouldn’t give you information about the growth of downtown in relationship to the Chicago River and Lake Michigan, or how it relates to a broader network of settlements in northern Illinois and beyond. It’s the same way with ancient cities—you need a more macro-level vantage to understand how their growth and decline compared to the areas around them.”

To get at this broader picture of where people lived and how their settlement patterns shifted over time, Feinman and Nicholas collaborated with Richard Blanton and Stephen Kowalewski in Oaxaca to survey one of the largest contiguous study regions in the world.

“For our systematic survey, we used aerial photographs and maps to guide us as we walked across the entire valley. When we found archaeological sites, we made notes of what we found and where and took collections to determine the periods of occupation,” says Nicholas. “We and our colleagues wound up covering thousands of square kilometers in the Oaxaca Valley and adjacent areas.” This research over the years has been supplemented with more in-depth excavations by many scholars at key sites.

This wider-ranging look at life in Monte Albán and its surrounding areas, drawn from both surveys and excavations, gave the researchers new insights over the years. “We learned that at Monte Albán and other settlements in prehispanic Oaxaca, the bulk of the residents lived on flattened terraces, which were constructed on the slopes of the hills. From the excavations that we and others conducted, we gained a perspective on terrace life, where people lived in individual houses with multiple rooms around a patio. Domestic units often shared a front retaining wall, and drains generally separated residences,” says Feinman. “People not only lived very close together, but they also must have been highly cooperative from one domestic unit to another, because if part of the retaining wall collapsed or the drain got clogged, they’d have to work together to fix it.”

The residents of Monte Albán also were economically interdependent, exchanging craft goods and food in the risky environment for agriculture where they lived. Although no large food storage facilities have been found, there are indications that the city’s residents participated in marketplace exchanges, which may have buffered the region’s unpredictable rainfall. Cooperative defense and economic opportunity drew people from afar to early Monte Albán.

The high degrees of cooperation between households at Monte Albán was echoed to some extent in the political organization of Monte Albán as a whole. “Compared to more autocratic societies, like the Classic-period Maya, Monte Albán seems to have had a more collective form of governance,” says Nicholas. Autocratic societies—ones ruled by despots, where a small group of people wielded all the power—tended to have architecture that reflected their form of rule, with big, fancy palaces and elaborate burial sites for the rich and powerful. Despotic rulers serve as the billboards for their regimes, often marked by aggrandizing and personalized monuments. Monte Albán, however, is characterized by non-residential public buildings, temples, and large, relatively open, shared plazas. Given the longevity of the site, the number of monuments that feature rulers is small.

Although defense was a key factor in the foundation and location of Monte Albán, there is no indication that the early occupants were coerced to move to this dense hilltop location where their agricultural prospects were somewhat risky, interpersonal efforts were needed to sustain their residences, and residential settlement was densely packed. Nevertheless, health measures indicate that the inhabitants of Monte Albán were generally better off than the residents of other prehispanic cities, and the institutions established at Monte Albán contributed to their well-being, drawing people from afar despite these challenges.

Since people probably weren’t forced to come to Monte Albán, and they didn’t come for the productive farmland, that leaves the question: why did Monte Albán grow so quickly and stay large and important for so long?

“We think we have a frame that draws more on cooperation,” says Nicholas. Based on the work of other scholars like Margaret Levi and Richard Blanton, Feinman hypothesizes that “it’s a kind of mutual relationship between people who have power and people that don’t. In this case, the powerful may have coordinated defense, helped organize marketplace exchange, and conducted ritual activities that enhanced community solidarity. On the other hand, the bulk of the city’s populace produced food and other goods that sustained the settlement and, through taxes, supported governance. It was a collaborative process that relied on compliance.”

Feinman notes that the architecture of the city might include clues about this cooperative relationship between the classes that led people to Monte Albán. “From the very founding of the site, there was a big main plaza where people could get together and express their voice, at least sometimes. People may have been encouraged to move there for defense and economic opportunity,” he says. “But on the other hand, in order to underpin and support these new institutions, farmers probably had to give over some of their surplus. So, it’s kind of a give and take.”

While Feinman and Nicholas note that this study is just one case, about one city, it does have some lessons for us today. “Monte Albán was a city where a new social contract was written at its foundation. It was somewhat more equitable and less elite-centric than what had gone on before,” says Feinman. “And with its collective and relatively equitable government, it endured for more than a millennium. Yet when it collapsed, the city’s population declined drastically and many of its institutions dissolved, ushering in a period of more autocratic rule.”