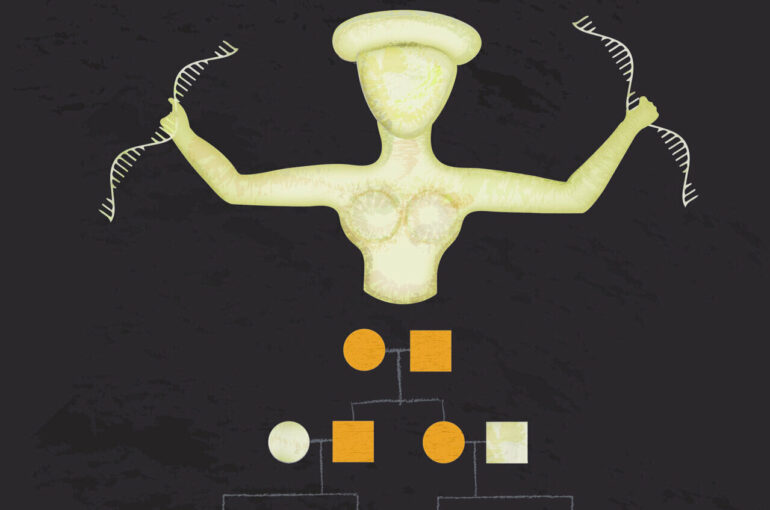 An international team of researchers from the Max Planck Institute for Evolutionary Anthropology in Leipzig, Germany, reports completely new insights into Bronze Age marriage rules and family structures in Greece. Analyses of ancient genomes show that the choice of marriage partners was determined by one’s own kinship.

When Heinrich Schliemann discovered the gold-rich shaft tombs of Mycenae with their famous gold masks more than 100 years ago, he could only speculate about the relationship of the people buried in them. Now, with the help of the analysis of ancient genomes, it has been possible for the first time to gain insights into kinship and marriage rules in Minoan Crete and Mycenaean Greece. The results were published in the journal Nature Ecology & Evolution.

A research team from the Max Planck Institute for Evolutionary Anthropology (MPI-EVA), together with an international team of partners, analyzed more than 100 genomes of Bronze Age people from the Aegean. “Without the great cooperation with our partners in Greece and worldwide, this would not have been possible,” says archaeologist Philipp Stockhammer, one of the study’s lead authors.

Thanks to recent methodological advances in the production and evaluation of ancient genetic datasets, it has now been possible to produce extensive data even in regions with problematic DNA preservation due to climate conditions, such as Greece. For a Mycenaean hamlet of the 16th century BC, it has even been possible to reconstruct the kinship of the house’s inhabitants—the first family tree that has so far been genetically reconstructed for the entire ancient Mediterranean region.

Apparently, some of the sons still lived in their parents’ hamlet in adulthood. Their children were buried in a tomb under the courtyard of the estate. One of the wives who married into the house brought her sister into the family, as her child was also buried in the same grave.

However, another finding was completely unexpected: on Crete and the other Greek islands, as well as on the mainland, it was very common to marry one’s first cousin 4,000 years ago.

“More than a thousand ancient genomes from different regions of the world have now been published, but it seems that such a strict system of kin marriage did not exist anywhere else in the ancient world,” says Eirini Skourtanioti, the lead author of the study who conducted the analyses. “This came as a complete surprise to all of us and raises many questions.”

How this particular marriage rule can be explained, the research team can only speculate. “Maybe this was a way to prevent the inherited farmland from being divided up more and more? In any case, it guaranteed a certain continuity of the family in one place, which is an important prerequisite for the cultivation of olives and wine, for example,” Stockhammer suspects. “What is certain is that the analysis of ancient genomes will continue to provide us with fantastic, new insights into ancient family structures in the future,” adds Skourtanioti.