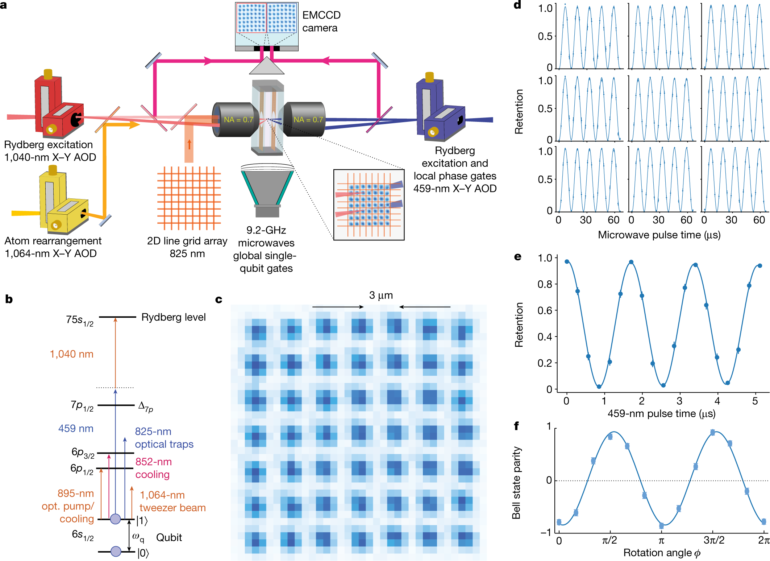 Molecules could make useful systems for quantum computers, but they must contain individually addressable, interacting quantum bit centers. In the journal Angewandte Chemie, a team of researchers has now presented a molecular model with three different coupled qubit centers. As each center is spectroscopically addressable, quantum information processing (QIP) algorithms could be developed for this molecular multi-qubit system for the first time, the team says.

Computers compute using bits, while quantum computers use quantum bits (or qubits for short). While a conventional bit can only represent 0 or 1, a qubit can store two states at the same time. These superimposed states mean that a quantum computer can carry out parallel calculations, and if it uses a number of qubits, it has the potential to be much faster than a standard computer.

However, in order for the quantum computer to perform these calculations, it must be able to evaluate and manipulate the multi-qubit information. The research teams of Alice Bowen and Richard Winpenny, University of Manchester, UK, and their colleagues have now produced a molecular model system with several separate qubit units, which can be spectroscopically detected and the states of which can be switched by interacting with one another.

“In our proposed molecular system, unpaired electrons instead of atoms or photons form the basis of the qubit centers,” Bowen explains. “Electrons have a property known as spin. As the spin assumes two superimposable quantum states, molecules containing several electron spin systems may be of use as potential multi-qubit systems for quantum computing.”

For their molecule (containing a copper ion complex, a ring formed of seven chromium ions and a nickel ion, and a nitroxide unit), the team observed characteristic signals for each qubit center in the electron paramagnetic resonance (EPR) spectrum. “The results presented prove that individual qubit units could be addressed independently and controllably—a vital prerequisite for using multi-qubit systems in quantum computing—using EPR,” Bowen says.

Compared to the systems currently used, such molecular multi-qubit systems could offer some advantages. To date, qubit systems have mainly been produced by superconducting circuits or from individual atoms or photons, which need extensive cooling. Molecular systems could afford the advantage of containing multiple qubit units, which can be easily changed and reconfigured by chemical synthesis. They could also be run at higher temperatures. This poses the chance to make quantum computing cheaper.