A new approach to solving the mystery of dark energy 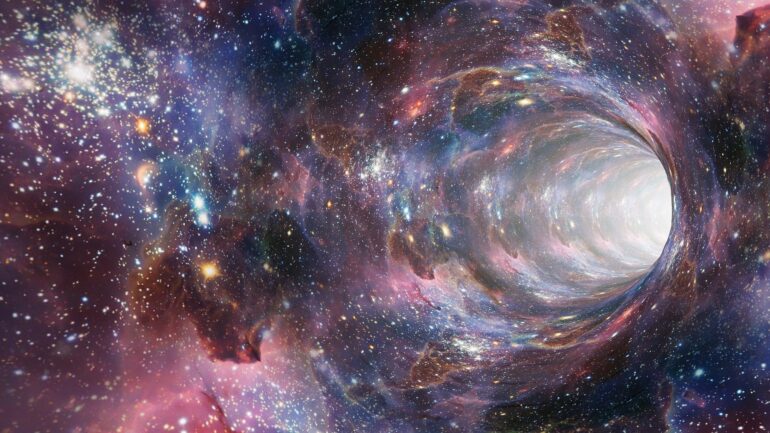 What is behind dark energy—and what connects it to the cosmological constant introduced by Albert Einstein? Two physicists from the University of Luxembourg point the way to answering these open questions of physics.

The universe has a number of bizarre properties that are difficult to understand with everyday experience. For example, the matter we know, consisting of atoms and molecules and other particles, apparently makes up only a small part of the energy density of the universe. The largest contribution, more than two-thirds, comes from “dark energy”—a hypothetical form of energy whose background physicists are still puzzling over.

Moreover, the universe is not only expanding steadily, but also doing so at an ever-faster pace. Both characteristics seem to be connected, because dark energy is also considered a driver of accelerated expansion. Moreover, it could reunite two powerful physical schools of thought: quantum field theory and the general theory of relativity developed by Albert Einstein. But there is a catch: calculations and observations have so far been far from matching. Now two researchers from Luxembourg have shown a way to solve this 100-year-old riddle in a paper published by Physical Review Letters.

The trail of virtual particles in a vacuum

“Dark energy arises from the formulas of quantum field theory,” explains Prof. Alexandre Tkatchenko, Professor of Theoretical Solid State Physics at the Department of Physics and Material Sciences at the University of Luxembourg. This theory was developed to bring together quantum mechanics and general relativity, which are incompatible in fundamental aspects.

Its essential feature: in contrast to quantum mechanics, the theory considers not only particles but also material-less fields as quantum objects. “In this framework, many researchers regard dark energy as an expression of the so-called vacuum energy,” says Tkatchenko: a physical quantity that, in a vivid image, is caused by a constant emergence of pairs of particles and their antiparticles—such as electrons and positrons—in what is actually empty space.

Physicists speak of this coming and going of virtual particles and their quantum fields as vacuum or zero-point fluctuations. While the particle pairs instantly vanish into nothingness again, they leave behind a certain amount of energy. “This vacuum energy also has a meaning in general relativity,” the Luxembourg scientist notes. “It manifests itself in the cosmological constant Einstein inserted into his equations for mathematical reasons.”

Unlike dark energy, which can only be deduced from the formulae of quantum field theory, the cosmological constant can be determined directly by astrophysical experiments. Measurements with the Hubble space telescope and the Planck space mission have yielded close and reliable values for the fundamental physical quantity.

Calculations of dark energy on the basis of quantum field theory, on the other hand, yield results that correspond to a value of the cosmological constant that is up to 10120 times larger—a colossal discrepancy—although in the world view of physicists prevailing today, both values should be equal. The discrepancy found instead is known as the “cosmological constant enigma.” “It is undoubtedly one of the greatest inconsistencies in modern science,” says Alexandre Tkatchenko.

Together with his Luxembourg research colleague Dr. Dimitry Fedorov, he has now brought the solution to this puzzle, which has been open for decades, a significant step closer. In a theoretical paper, the results of which they recently published, the two Luxembourg researchers propose a new interpretation of dark energy. It assumes that the zero-point fluctuations lead to a polarizability of the vacuum, which can be both measured and calculated.

“In virtual pairs of particles with an electric charge, it arises from electrodynamic forces that these particles exert on each other during their extremely short existence,” Tkatchenko explains. The physicists refer to this as a self-interaction, the polarizability in such particles a feature of the reaction to it. “It leads to an energy density that can be determined with the help of a new model,” says the Luxembourg scientist.

Together with his research colleague Fedorov, he developed this model and presented it for the first time in 2018, originally used to describe atomic properties, for example in solids. Since the geometric characteristics are quite easy to measure experimentally, polarizability can also be determined via these diversions.

“We transferred this procedure to the processes in the vacuum,” explains Fedorov. To do this, the two researchers looked at the behavior of electrons and positrons, which they treated as fields according to the principles of quantum field theory. The fluctuations of these fields can also be characterized by an equilibrium geometry whose value is already known from experiments.

“We inserted it into the formulas of our model and in this way ultimately obtained the strength of the polarization of the vacuum,” Fedorov reports. The last step was then to quantum mechanically calculate the energy density of the self-interaction between the electrons and positrons. The result obtained in this way agrees well with the measured values for the cosmological constant: This means: “Dark energy can be traced back to the energy density of the self-interaction of quantum fields,” emphasizes Alexandre Tkatchenko.

“Our work thus offers an elegant and unconventional approach to solving the riddle of the cosmological constant,” sums up the physicist. “Moreover, it provides a verifiable prediction: namely, that quantum fields such as those of electrons and positrons do indeed possess a small but ever-present polarization.”

This finding points the way for future experiments to detect this polarization in the laboratory as well, say the two Luxembourg researchers, who now want to apply their model to other particle-antiparticle pairs. “Our conceptual idea should be applicable to any field,” emphasizes Alexandre Tkatchenko. He sees the new results obtained together with Dimitry Fedorov as the first step towards a better understanding of dark energy—and its connection to Albert Einstein’s cosmological constant.

Tkatchenko is convinced: “In the end, this will also shed light on the way in which quantum field theory and general reactivity theory are interwoven as two ways of looking at the universe and its components.”

Provided by
University of Luxembourg


Citation:
A new approach to solving the mystery of dark energy (2023, January 24)