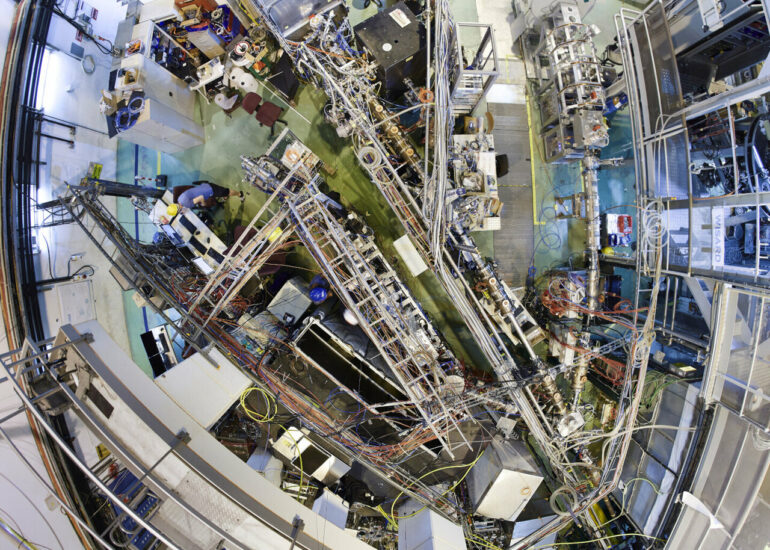 The atomic nucleus is a tough nut to crack. The strong interaction between the protons and neutrons that make it up depends on many quantities, and these particles, collectively known as nucleons, are subject to not only two-body forces but also three-body ones. These and other features make the theoretical modeling of atomic nuclei a challenging endeavor.

In the past few decades, however, ab initio theoretical calculations, which attempt to describe nuclei from first principles, have started to change our understanding of nuclei. These calculations require fewer assumptions than traditional nuclear models, and they have a stronger predictive power. That said, because so far they can only be used to predict the properties of nuclei up to a certain atomic mass, they cannot always be compared with so-called DFT calculations, which are also fundamental and powerful and have been around for longer. Such a comparison is essential to build a nuclear model that is applicable across the board.

In a paper just published in Physical Review Letters, an international team at CERN’s ISOLDE facility shows how a unique combination of high-quality experimental data and several ab initio and DFT nuclear-physics calculations has resulted in an excellent agreement between the different calculations, as well as between the data and the calculations.

“Our study demonstrates that precision nuclear theory from first principles is no longer a dream,” says Stephan Malbrunot of CERN, the first author of the paper. “In our work, the calculations agree with each other, as well as with our ISOLDE data on nickel nuclei, to within a small theoretical uncertainty.”

Using a suite of experimental methods at ISOLDE, including a technique to detect the light emitted by short-lived atoms when laser light is shone on them, Malbrunot and colleagues determined the (charge) radii of a range of short-lived nickel nuclei, which have the same number of protons, 28, but a different number of neutrons. These 28 protons fill a complete shell within the nucleus, resulting in nuclei that are more strongly bound and stable than their nuclear neighbors. Such “magic” nuclei are excellent test cases for nuclear theories, and in terms of their radius, nickel nuclei are the last unexplored magic nuclei that have a mass within the mass region at which both ab initio and DFT calculations can be made.

Comparing the ISOLDE radii data with three ab initio calculations and one DFT calculation, the researchers found that the calculations agree with the data, as well as with each other, to within a theoretical uncertainty of one part in a hundred.

“An agreement at this level of precision demonstrates that it will eventually become possible to build a model that is applicable across the whole chart of nuclei,” says Malbrunot.