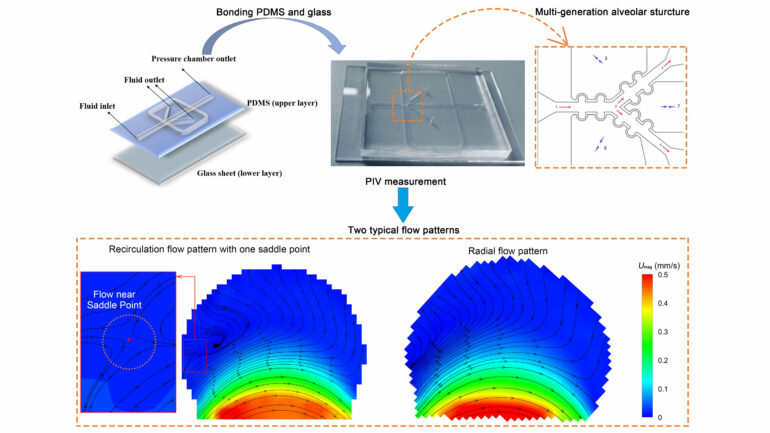 Alveoli are the basic functional units of the human respiratory system, acting as tiny air sacs that exchange gases. Air inhaled through the mouth and nose flows into the lungs through the branched structure of the bronchial tubes, and the alveoli appear in the deep sections of this network.

To fully understand and treat respiratory diseases, it is important to determine the flow pattern of air and particulates through the alveoli. In Biomicrofluidics, scientists from the Harbin Institute of Technology in China created a model alveolar system that mimics the breathing action of the human lung and allows visualization of flow patterns within the alveoli.

The investigators designed a chip that includes tubes arranged like the structure of a bifurcation point in the bronchial network. The upper layer of the chip is made of a flexible polymer molded into small tubes that mimic the alveolar structure. The lower layer is glass, which allows the authors to visualize fluid flow through the tubes.

To mimic respiration, the scientists devised a system in which gas was pressurized in a sinusoidal fashion and pumped around the flexible tubes. This creates a breath-like cycle of inhalation and exhalation. To study flow patterns in the system, the group added small red polystyrene spheres to the fluid flowing through tubes. These spheres allowed them to photograph movement of the fluid as it was pushed through the tubes by the artificial breathing apparatus.

Subsequent branches in the bronchial network are known as generations, and the team found different flow patterns for different generations. In the human lung, alveoli appear at the 15th generation and remain present for generations up to 23. The researchers found a change in flow pattern between the 19th–20th and the 21st–22nd generations.

The investigators observed a change in the next generation.

“The alveolar flow pattern in the 21st generation has both vortex flow and radial flow. The vortex region is much smaller than the radial flow region. By the time the flow reaches the 22nd generation, vortex flow disappears completely, and we observe only radial flow,” Zhu said.

The authors also found evidence of chaotic behavior near the vortex center. They said more research is needed to fully understand this, but they felt the current study provides a good baseline for deeper investigations.

With the model, researchers will be able to study changes in flow patterns in the alveoli due to diseases such as emphysema and COPD.

The article “Microflows in two-generation alveolar cells at an acinar bifurcation” is authored by Yue Yang, Weitao Bai, Jun Dong, Huimin Lv, and Yonggang Zhu. The article will appear in Biomicrofluidics on Sept. 6, 2022.