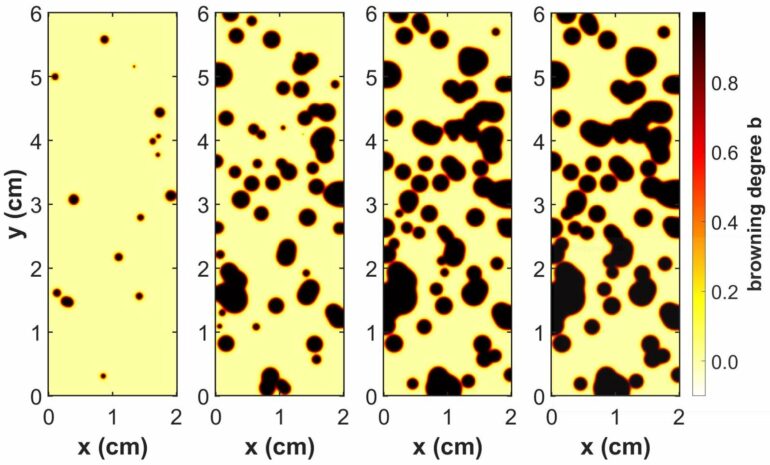 Banana peels hold the key to reducing tons of food waste. A new study released in Physical Biology reveals how the browning of this household staple can be explained and modeled.

A team of researchers at Florida State University have produced a new method of simulating spot patterns on bananas, providing new insight into how this fruit browns over time. Many fruits turn brown when cut, damaged, or stored for longer periods of time—a process caused by air and enzymatic reactions. This process leads to an estimated 50 million tons of food waste as stores and consumers throw out banana fruits due to their appearance.

“For 2019, the total production of bananas was estimated to be 117 million tons making it a leading crop in the world,” says Oliver Steinbock, lead author of the research. “When bananas ripen, they form numerous dark spots that are familiar to most people and are often used as a ripeness indicator. However, the process of how these spots are formed, grow, and their resulting pattern remained poorly understood, until now.”

Together with co-authors Qingpu Wang and Pamela Knoll, Steinbock studied how the spots form and evolve over time through time lapse videos. By applying a nonlinear reaction-diffusion model which considers the oxygen concentration and browning degree of the peel, they found that the spots appear during a two-day window, rapidly expand, but then mysteriously stall.

The team then looked at the root cause of the spot stalling which suggests mitigation strategies of the browning process that could compete with genetic modifications and storing the fruit in cooled containers or under a modified atmosphere. They found that the formation of the spots can be slowed by decreasing oxygen levels in their tiny formation sites.

“Fruit browning continues to be a major challenge for the food industry. Our study offers a model for banana spotting which is capable of capturing their evolution in a physically meaningful context and which can be applied to procedures to mitigate food waste,” Steinbock concludes.