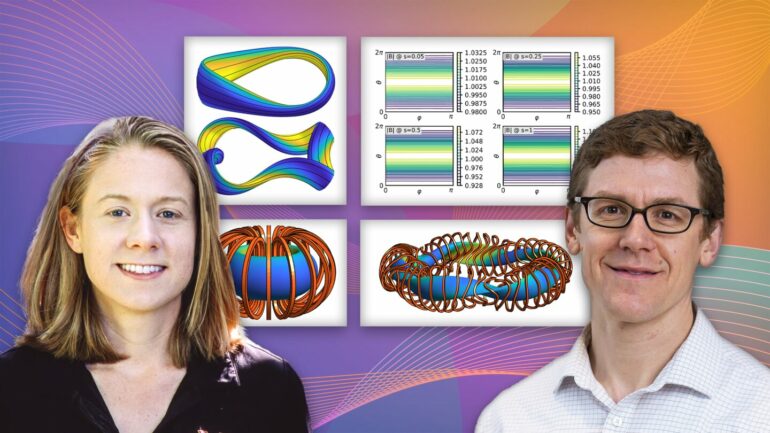 Scientists have achieved a remarkable breakthrough in the conceptual design of twisty stellarators, experimental magnetic facilities that could reproduce on Earth the fusion energy that powers the sun and stars. The breakthrough shows how to more precisely shape the enclosing magnetic fields in stellarators to create an unprecedented ability to hold the fusion fuel together.

“The key thing was developing a piece of software that allows you to rapidly try out new design methods” said Elizabeth Paul, a Princeton University Presidential Postdoctoral Fellow at the U.S. Department of Energy’s Princeton Plasma Physics Laboratory (PPPL) and co-author of a paper that details the finding in Physical Review Letters. The results produced by Paul and lead author Matt Landreman of the University of Maryland could boost the capability of stellarators to harvest fusion to generate safe and carbon-free electrical power for mankind.

Stellarators, invented by Princeton astrophysicist and PPPL founder Lyman Spitzer in the 1950s, have long taken a back seat to tokamaks in the worldwide effort to produce controlled fusion energy. But recent developments that include the impressive performance of the Wendelstein 7-X (W7-X) stellarator in Germany, the extensive results from the Large Helical Device (LHD) in Japan, the promising results from the Helically Symmetric Experiment (HSX) in Madison, Wisconsin, and the proposed use of simple permanent magnets to replace complex stellarator coils have created a renaissance of interest in the twisty machines.

Fusion creates vast energy throughout the universe by combining light elements in the form of plasma, the hot, charged state of matter composed of free electrons and atomic nuclei, or ions, that makes up 99 percent of the visible universe. Stellarators could produce laboratory versions of the process without risk of the damaging disruptions that more widely used tokamak fusion facilities face.

However, the twisting magnetic fields in stellarators have been less effective at confining the paths of the ions and electrons than the symmetrical, doughnut shaped fields in tokamaks routinely do, causing a large and sustained loss of the extreme heat required to bring the ions together to release fusion energy. Moreover, the complex coils that produce the stellarator fields are difficult to design and build.

The current breakthrough produces what is called “quasisymmetry” in stellarators to nearly match the confining ability of a tokamak’s symmetrical fields. While scientists have long sought to produce quasisymmetry in twisting stellarators, the new research develops a trick to create it nearly precisely. The trick uses new open-source software called SIMSOPT (Simons Optimization Suite) that is designed to optimize stellarators by slowly refining the simulated shape of the boundary of the plasma that marks out the magnetic fields. “The ability to automate things and rapidly try things out with this new software makes these configurations possible,” Landreman said.

Scientists could also apply the findings to the study of astrophysical problems, he said. In Germany, a team is developing a quasisymmetric stellarator to confine and study antimatter particles such as those found in space. “It’s exactly the same challenge as with fusion,” Landreman said. “You just need to make sure that the particles stay confined.”

The breakthrough made some simplifying assumptions that will require enhancement. For simplicity, for example, the research considered a regime in which the pressure and electric current in the plasma were small. “We’ve made some simplifying assumptions but the research is a significant step going forward because we’ve shown that you can actually get precise quasisymmetry that for a long time was thought not to be possible,” Paul said.

Also needing further development before the findings can be realized are new stellarator coils and detailed engineering of the stellarator design. The magnetic field could be provided in part by the permanent magnets that PPPL is developing to streamline today’s twisted stellarator coils. “The biggest missing pieces are the magnets and the pressure and current,” Landreman said.

Paul’s work on the PRL paper is among achievements during the second year of her Princeton Presidential fellowship. She previously won the American Physical Society’s highly competitive 2021 Marshall N. Rosenbluth Outstanding Doctoral Thesis Award for her dissertation at the University of Maryland, on which Landreman was an advisor. She now works with PPPL graduate student Richard Nies, who recently published a paper that applies the mathematical tools that her Maryland thesis developed to accelerate the production of quasisymmetry.

Overseeing Paul’s Princeton work is PPPL physicist Amitava Bhattacharjee, a Princeton professor of astrophysical sciences who also oversees the “Hidden Symmetries and Fusion Energy” project sponsored by the Simons Foundation in New York that funded the PRL paper. “Matt’s and Elizabeth’s work makes adroit use of the mathematical and computational tools developed in recent years on stellarator optimization, and establishes beyond doubt that we can design quasisymmetric stellarator magnetic fields with an unprecedented level of accuracy. It is a triumph of computational design.”

Stellarator work on the Simons project parallels PPPL research to develop the promising device the Laboratory invented some 70 years ago. Such development would combine the best features of stellarators and tokamaks to design a disruption-free facility with strong plasma confinement to reproduce a virtually unlimited source of fusion energy.