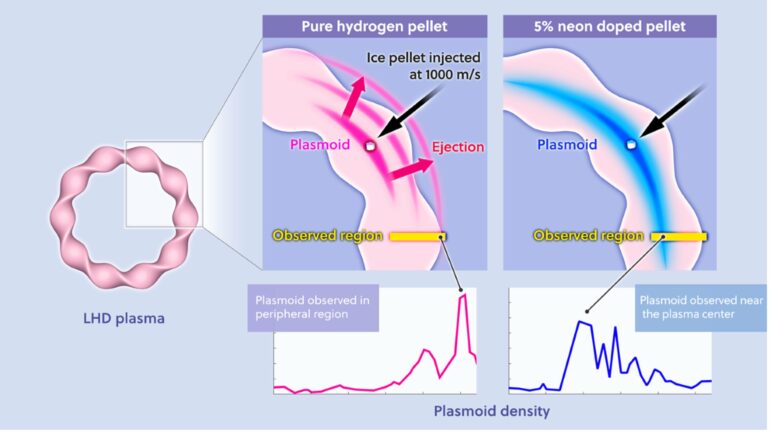 At ITER—the world’s largest experimental fusion reactor, currently under construction in France through international cooperation—the abrupt termination of magnetic confinement of a high temperature plasma through a so-called “disruption” poses a major open issue. As a countermeasure, disruption mitigation techniques, which allow to forcibly cool the plasma when signs of plasma instabilities are detected, are a subject of intensive research worldwide.

Using theoretical models and experimental measurements with advanced diagnostics at Large Helical Device owned by NIFS, the researchers clarified the dynamics of the dense plasmoid that forms around the ice pellet and identified the physical mechanisms responsible for the successful enhancement of the performance of the forced cooling system, which is indispensable for carrying out the experiments at ITER. These results will contribute to the establishment of plasma control technologies for future fusion reactors. The team’s report was made available online in Physical Review Letters.

The construction of the world’s largest experimental fusion reactor, ITER, is underway in France through international cooperation. At ITER, experiments will be conducted to generate 500 MW fusion energy by maintaining the “burning state” of the hydrogen isotope plasma at more than 100 million degrees. One of the major obstacles to the success of those experiments is a phenomenon called “disruption” during which the magnetic field configuration used to confine the plasma collapses due to magnetohydrodynamic instabilities.

Disruption causes the high-temperature plasma to flow into the inner surface of the containing vessel, resulting in structural damage that, in turn, may cause delays in the experimental schedule and higher cost. Although the machine and the operating conditions of ITER have been carefully designed to avoid disruption, uncertainties remain and for a number of experiments so that a dedicated machine protection strategy is required as a safeguard.

A promising solution to this problem is a technique called “disruption mitigation,” which forcibly cools the plasma at the stage where first signs of instabilities that may cause a disruption are detected, thereby preventing damage to plasma-facing material components. As a baseline strategy, researchers are developing a method using ice pellets of hydrogen frozen at temperatures below 10 Kelvin and injecting it into a high-temperature plasma.

The injected ice melts from the surface and evaporates and ionizes owing to heating by the ambient high-temperature plasma, forming a layer of low-temperature, high-density plasma (hereafter referred to as a “plasmoid”) around the ice. Such a low-temperature, high-density plasmoid mixes with the main plasma, whose temperature is reduced in the process. However, in recent experiments, it has become clear that when pure hydrogen ice is used, the plasmoid is ejected before it can mix with the target plasma, making it ineffective for cooling the high-temperature plasma deeper below the surface.

This ejection was attributed to the high pressure of the plasmoid. Qualitatively, a plasma confined in a donut-shaped magnetic field tends to expand outward in proportion to the pressure. Plasmoids, which are formed by the melting and the ionization of hydrogen ice, are cold but very dense. Because temperature equilibration is much faster than density equilibration, the plasmoid pressure rises above that of the hot target plasma. The consequence is that the plasmoid becomes polarized and experiences drift motion across the magnetic field, so that it propagates outward before being able to fully mix with the hot target plasma.

A solution to this problem was proposed from theoretical analysis: model calculations predicted that by mixing a small amount of neon into hydrogen, the pressure of the plasmoid could be reduced. Neon freezes at a temperature of approximately 20 Kelvin and produces strong line radiation in the plasmoid. Therefore, if the neon is mixed with hydrogen ice before injection, part of the heating energy can be emitted as photon energy.

To demonstrate such a beneficial effect of using a hydrogen-neon mixture, a series of experiments was conducted in the Large Helical Device (LHD) located in Toki, Japan. For many years, the LHD has operated a device called the “solid hydrogen pellet injector” with high reliability, which injects ice pellets with a diameter of approximately 3 mm at the speed of 1100 m/s. Due to the system’s high reliability, it is possible to inject hydrogen ice into the plasma with a temporal precision of 1 ms, which allows measurement of the plasma temperature and density just after the injected ice melts.

Recently, the world’s highest time resolution for Thomson Scattering (TS) of 20 kHz was achieved in the LHD system using new laser technology. Using this system, the research team has captured the evolution of plasmoids. They found that, as predicted by theoretical calculations, plasmoid ejection was suppressed when hydrogen ice was doped with approximately 5 % neon, in stark contrast to the case where pure hydrogen ice was injected. In addition, the experiments confirmed that the neon plays a useful role in the effective cooling of the plasma.

The results of this study show for the first time that the injection of hydrogen ice pellets doped with a small amount of neon into a high-temperature plasma is useful to effectively cool the deep core region of the plasma by suppressing plasmoid ejection. This effect of neon doping is not only interesting as a new experimental phenomenon, but also supports the development of the baseline strategy of disruption mitigation in ITER. The design review of the ITER disruption mitigation system is scheduled for 2023, and the present results will help improve the performance of the system.