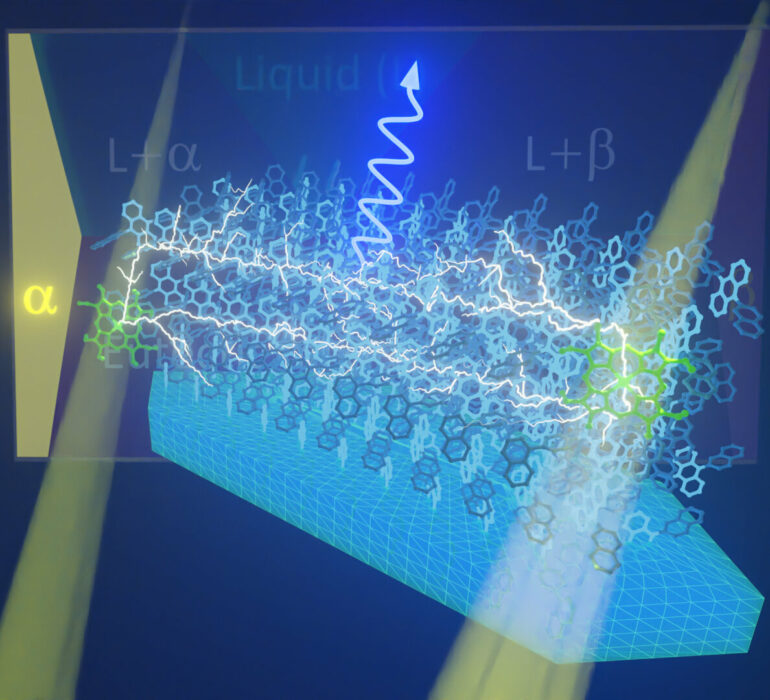 Solid-solution organic crystals have been brought into the quest for superior photon upconversion materials, which transform presently wasted long-wavelength light into more useful shorter wavelength light. Scientists from Tokyo Institute of Technology have revisited a materials approach previously deemed lackluster—using a molecule originally developed for organic LEDs—and have achieved outstanding performance and efficiency. Their findings pave the way for many novel photonic technologies, such as better solar cells and photocatalysts for hydrogen and hydrocarbon productions.

Light is a powerful source of energy that can, if leveraged correctly, be used to drive stubborn chemical reactions, generate electricity, and run optoelectronic devices. However, in most applications, not all the wavelengths of light can be used. This is because the energy that each photon carries is inversely proportional to its wavelength, and chemical and physical processes are triggered by light only when the energy provided by individual photons exceeds a certain threshold.

This means that devices like solar cells cannot benefit from all the color contained in sunlight, as it comprises a mixture of photons with both high and low energies. Scientists worldwide are actively exploring materials to realize photon upconversion (PUC), by which photons with lower energies (longer wavelengths) are captured and re-emitted as photons with higher energies (shorter wavelengths). One promising way to realize this is through triplet-triplet annihilation (TTA). This process requires the combination of a sensitizer material and an annihilator material. The sensitizer absorbs low energy photons (long-wavelength light) and transfers its excited energy to the annihilator, which emits higher energy photons (light of shorter wavelength) as a result of TTA.

Finding good solid materials for PUC has proven challenging for a long time. Although liquid samples can achieve relatively high PUC efficiency, working with liquids, especially those comprising organic solvents, is inherently risky and cumbersome in many applications. However, previous trials to create PUC solids generally suffered from poor crystal quality and small crystal domains, which led to short traveling distances of triplet excited states and thus, low PUC efficiency. Additionally, in most previous solid PUC samples, stability under continuous photoirradiation was not tested and experimental data were often acquired in inert gas atmospheres. Hence, the low efficiency and insufficient materials stability had been of concern for a long time.

Now, in a recent study led by Associate Professor Yoichi Murakami from Tokyo Tech, Japan, a team of researchers found the answer to this challenge. Published in Materials Horizons, their paper (open access) describes how they focused on van der Waals crystals, a classical materials class that has not been considered for the quest of high-efficiency PUC solids. After discovering that 9-(2-naphthyl)-10-[4-(1-naphthyl)phenyl]anthracene (ANNP), a hydrocarbon molecule originally developed for blue organic LEDs, was an excellent annihilator for embodying their concept, they tried mixing it with platinum octaethylporphyrin (PtOEP), a staple sensitizer that absorbs green light.

The team found that aggregation of the sensitizer molecules could be completely avoided by utilizing the crystalline phase of a van der Waals solid solution with a sufficiently low proportion of PtOEP to ANNP (around 1:50000). They proceeded to thoroughly characterize the obtained crystals and found some insight into why using the ANNP annihilator prevented the aggregation of the sensitizer when other existing annihilators had failed to do so in previous studies. Moreover, the solid crystals the team produced were highly stable and exhibited outstanding performance, as Dr. Murakami remarks: “The results of our experiments using simulated sunlight indicate that solar concentration optics such as lenses are no longer needed to efficiently upconvert terrestrial sunlight.”

Overall, this study brings van der Waals crystals back into the game of PUC as an effective way of creating outstanding solid materials using versatile hydrocarbon annihilators. “The proof-of-concept we presented in our paper is a major technical leap forward in the quest for high-performance PUC solids, which will open up diverse photonics technologies in the future,” concludes Dr. Murakami. Let us hope further research in this topic allows us to efficiently transform light into its most useful forms.